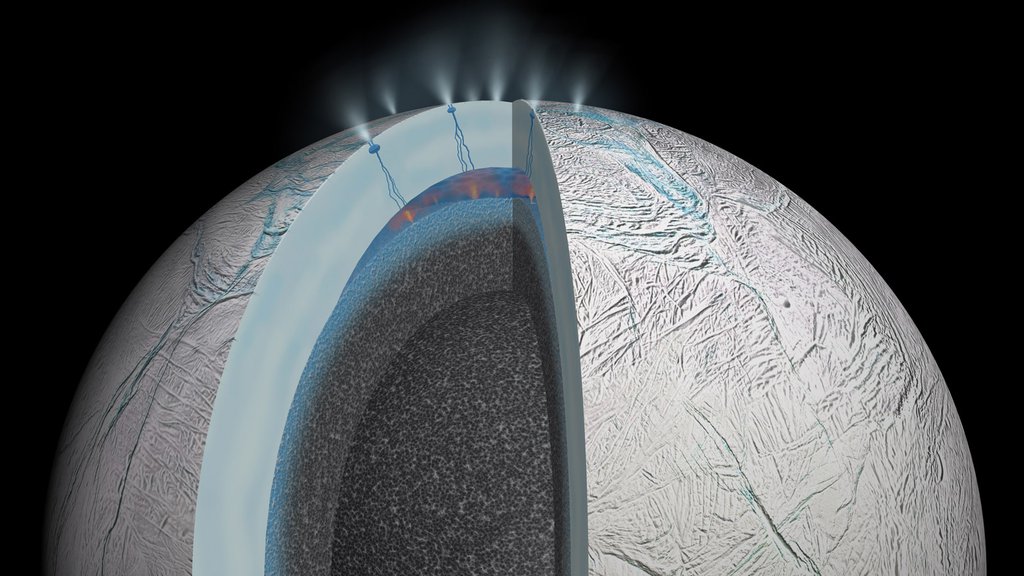 This cutaway view of Saturn's moon Enceladus is an artist's rendering that depicts possible hydrothermal activity that may be taking place on and under the seafloor of the moon's subsurface ocean, based on recently published results from NASA's Cassini mission.› Full image and caption
Credit: NASA/JPL-Caltech | 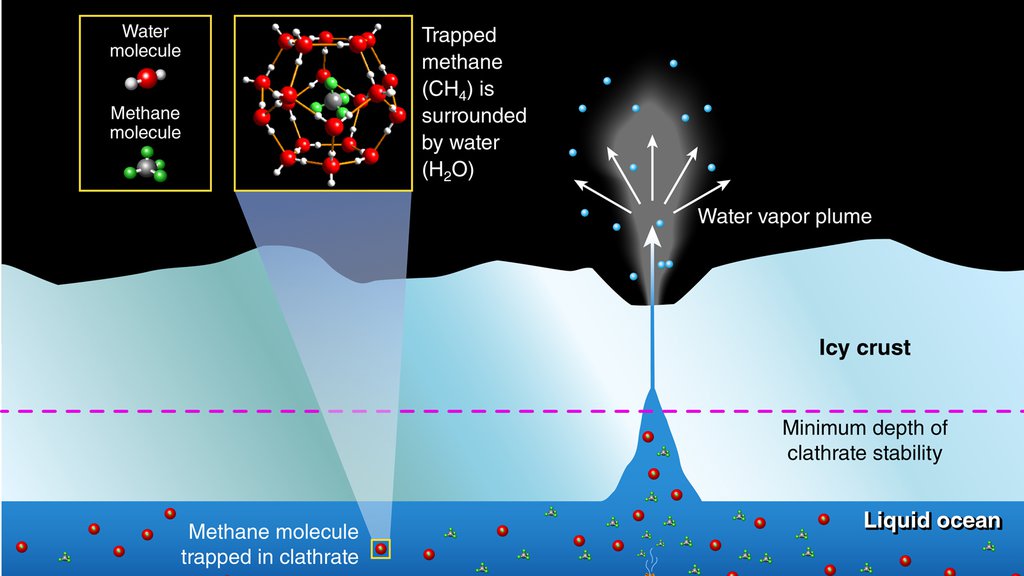 This illustration depicts potential origins of methane found in the plume of gas and ice particles that sprays from Saturn's moon, Enceladus, based on research by scientists working with the Ion and Neutral Mass Spectrometer on NASA's Cassini mission.› Full image and caption
Credit: Southwest Research Institute

The hidden ocean of Saturn's moon Enceladus could be home to present-day hydrothermal activity, according to two new studies by scientists with NASA's Cassini mission.

› The results have important implications for the habitability of icy worlds

NASA's Cassini spacecraft has provided scientists the first clear evidence that Saturn's moon Enceladus exhibits signs of present-day hydrothermal activity which may resemble that seen in the deep oceans on Earth. The implications of such activity on a world other than our planet open up unprecedented scientific possibilities.

"These findings add to the possibility that Enceladus, which contains a subsurface ocean and displays remarkable geologic activity, could contain environments suitable for living organisms," said John Grunsfeld, astronaut and associate administrator of NASA's Science Mission Directorate in Washington. "The locations in our solar system where extreme environments occur in which life might exist may bring us closer to answering the question: are we alone in the universe."

Hydrothermal activity occurs when seawater infiltrates and reacts with a rocky crust and emerges as a heated, mineral-laden solution, a natural occurrence in Earth's oceans. According to two science papers, the results are the first clear indications an icy moon may have similar ongoing active processes.

The first paper, published this week in the journal Nature, relates to microscopic grains of rock detected by Cassini in the Saturn system. An extensive, four-year analysis of data from the spacecraft, computer simulations and laboratory experiments led researchers to the conclusion the tiny grains most likely form when hot water containing dissolved minerals from the moon's rocky interior travels upward, coming into contact with cooler water. Temperatures required for the interactions that produce the tiny rock grains would be at least 194 degrees Fahrenheit (90 degrees Celsius).

"It's very exciting that we can use these tiny grains of rock, spewed into space by geysers, to tell us about conditions on -- and beneath -- the ocean floor of an icy moon," said the paper's lead author Sean Hsu, a postdoctoral researcher at the University of Colorado at Boulder.

Cassini's cosmic dust analyzer (CDA) instrument repeatedly detected miniscule rock particles rich in silicon, even before Cassini entered Saturn's orbit in 2004. By process of elimination, the CDA team concluded these particles must be grains of silica, which is found in sand and the mineral quartz on Earth. The consistent size of the grains observed by Cassini, the largest of which were 6 to 9 nanometers, was the clue that told the researchers a specific process likely was responsible.

On Earth, the most common way to form silica grains of this size is hydrothermal activity under a specific range of conditions; namely, when slightly alkaline and salty water that is super-saturated with silica undergoes a big drop in temperature.

"We methodically searched for alternate explanations for the nanosilica grains, but every new result pointed to a single, most likely origin," said co-author Frank Postberg, a Cassini CDA team scientist at Heidelberg University in Germany.

Hsu and Postberg worked closely with colleagues at the University of Tokyo who performed the detailed laboratory experiments that validated the hydrothermal activity hypothesis. The Japanese team, led by Yasuhito Sekine, verified the conditions under which silica grains form at the same size Cassini detected. The researchers think these conditions may exist on the seafloor of Enceladus, where hot water from the interior meets the relatively cold water at the ocean bottom.

The extremely small size of the silica particles also suggests they travel upward relatively quickly from their hydrothermal origin to the near-surface sources of the moon's geysers. From seafloor to outer space, a distance of about 30 miles (50 kilometers), the grains spend a few months to a few years in transit, otherwise they would grow much larger.

The authors point out that Cassini's gravity measurements suggest Enceladus' rocky core is quite porous, which would allow water from the ocean to percolate into the interior. This would provide a huge surface area where rock and water could interact.

The second paper, recently published in Geophysical Research Letters, suggests hydrothermal activity as one of two likely sources of methane in the plume of gas and ice particles that erupts from the south polar region of Enceladus. The finding is the result of extensive modeling by French and American scientists to address why methane, as previously sampled by Cassini, is curiously abundant in the plume.

The team found that, at the high pressures expected in the moon's ocean, icy materials called clathrates could form that imprison methane molecules within a crystal structure of water ice. Their models indicate that this process is so efficient at depleting the ocean of methane that the researchers still needed an explanation for its abundance in the plume.

In one scenario, hydrothermal processes super-saturate the ocean with methane. This could occur if methane is produced faster than it is converted into clathrates. A second possibility is that methane clathrates from the ocean are dragged along into the erupting plumes and release their methane as they rise, like bubbles forming in a popped bottle of champagne.

The authors agree both scenarios are likely occurring to some degree, but they note that the presence of nanosilica grains, as documented by the other paper, favors the hydrothermal scenario.

"We didn't expect that our study of clathrates in the Enceladus ocean would lead us to the idea that methane is actively being produced by hydrothermal processes," said lead author Alexis Bouquet, a graduate student at the University of Texas at San Antonio. Bouquet worked with co-author Hunter Waite, who leads the Cassini Ion and Neutral Mass Spectrometer (INMS) team at Southwest Research Institute in San Antonio.

Cassini first revealed active geological processes on Enceladus in 2005 with evidence of an icy spray issuing from the moon's south polar region and higher-than-expected temperatures in the icy surface there. With its powerful suite of complementary science instruments, the mission soon revealed a towering plume of water ice and vapor, salts and organic materials that issues from relatively warm fractures on the wrinkled surface. Gravity science results published in 2014 strongly suggested the presence of a 6-mile- (10-kilometer-) deep ocean beneath an ice shell about 19 to 25 miles (30 to 40 kilometers) thick.

The Cassini-Huygens mission is a cooperative project of NASA, ESA (European Space Agency) and the Italian Space Agency. NASA's Jet Propulsion Laboratory in Pasadena, California, manages the mission for the agency's Science Mission Directorate in Washington. The Cassini CDA instrument was provided by the German Aerospace Center. The instrument team, led by Ralf Srama, is based at the University of Stuttgart in Germany. JPL is a division of the California Institute of Technology in Pasadena.

Updated on March 11, 2015 at 2:50pm(PST) to include information on the role of French and American scientists