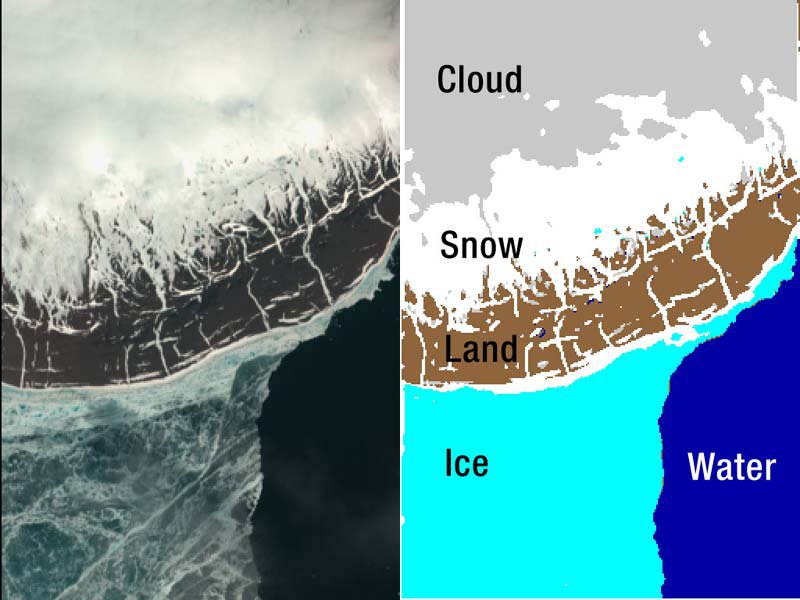 On the left, Resolute Bay seen by the Hyperion instrument aboard Earth Observing-1. On the right, a visual representation of the analysis done by JPL's Autonomous Sciencecraft Experiment software.

Spring thaw in the Northern Hemisphere was monitored by a new set of eyes this year -- an Earth-orbiting NASA spacecraft carrying a new version of software trained to recognize and distinguish snow, ice, and water from space.

Spring thaw in the Northern Hemisphere was monitored by a new set of eyes this year -- an Earth-orbiting NASA spacecraft carrying a new version of software trained to recognize and distinguish snow, ice, and water from space.

Using this software, the Space Technology 6 Autonomous Sciencecraft Experiment autonomously tracked changes in the cryosphere, the section of Earth that is frozen, and relayed the information and images back to scientists.

While other spacecraft only capture images when they receive explicit commands to do so, for the last year Earth Observing-1 has been making its own decisions. Based on general guidelines from scientists, the spacecraft automatically tracks events such as volcano eruptions, floods and ice formation. The most recent software upgrade allows the spacecraft to accurately recognize cryosphere changes such as ice melting.

Previously, scientists spent several months developing software for Earth Observing-1 to detect changes in snow, water and ice. The new software is capable of learning by itself, and it took only a few hours for scientists to train it to recognize cryosphere changes. In fact, the new software has learned to classify the images so well that scientists plan to use it for the remainder of the mission.

"This new software is capable of a rudimentary form of learning, much the way a child learns the names of new objects," said Dominic Mazzoni, the JPL computer scientist who developed the software. "Instead of programming the software using a complicated series of commands and mathematical equations, scientists play the role of a teacher, repeatedly showing the computer different images and giving feedback until it has correctly learned to tell them apart."

On Earth Observing-1, the software searches for specific cryospheric events and reprograms the spacecraft to capture additional images of the event.

"The software has exceeded all of our expectations," said Dr. Steve Chien, JPL principal investigator for the Autonomous Sciencecraft Experiment. "We have demonstrated that a spacecraft can operate autonomously, and the software has taken literally hundreds of images without ground intervention."

Future versions of the software also might be used to track dust storms on Mars, search for ice volcanoes on Jupiter’s moon Europa, and monitor activity on Jupiter's volcanically active moon Io. NASA's New Millennium Program developed both the satellite and the software. The program is responsible for testing new technologies in space.

For more information on the Autonomous Sciencecraft Experiment on the Internet, visit: http://ase.jpl.nasa.gov .

For more information on the New Millennium Program on the Internet, visit: http://nmp.jpl.nasa.gov .

For information about the Earth Observing-1 spacecraft on the Internet, visit: http://eo1.gsfc.nasa.gov .