The robotic arm on NASA’s Perseverance rover reached out to examine rocks in an area on Mars nicknamed the “Cratered Floor Fractured Rough” area in this image captured on July 10, 2021 (the 138th sol, or Martian day, of its mission).

After testing a bristling array of instruments on its robotic arm, NASA’s latest Mars rover gets down to business: probing rocks and dust for evidence of past life.

NASA’s Mars 2020 Perseverance rover has begun its search for signs of ancient life on the Red Planet. Flexing its 7-foot (2-meter) mechanical arm, the rover is testing the sensitive detectors it carries, capturing their first science readings. Along with analyzing rocks using X-rays and ultraviolet light, the six-wheeled scientist will zoom in for closeups of tiny segments of rock surfaces that might show evidence of past microbial activity. 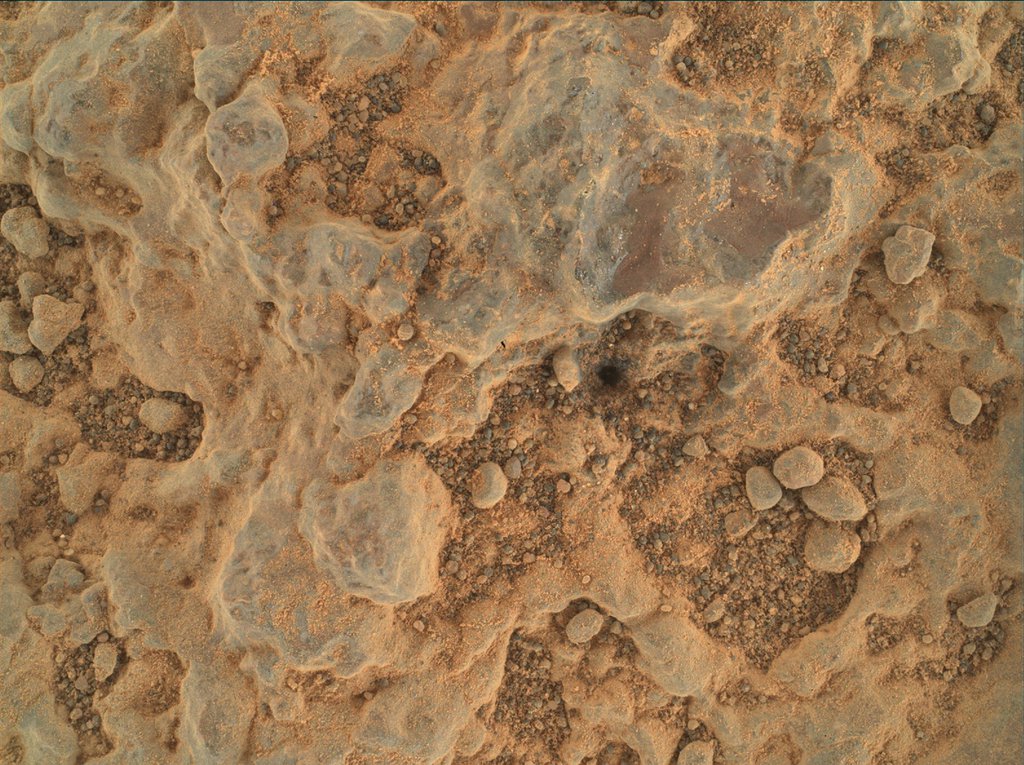 NASA’s Perseverance Mars rover took this close-up of a rock target nicknamed “Foux” using its WATSON camera on the end of the rover’s robotic arm. The image was taken July 11, 2021, the 139th Martian day, or sol, of the mission.

Called PIXL, or Planetary Instrument for X-ray Lithochemistry, the rover’s X-ray instrument delivered unexpectedly strong science results while it was still being tested, said Abigail Allwood, PIXL’s principal investigator at NASA’s Jet Propulsion Laboratory in Southern California. Located at the end of the arm, the lunchbox-size instrument fired its X-rays at a small calibration target – used to test instrument settings – aboard Perseverance and was able to determine the composition of Martian dust clinging to the target.

“We got our best-ever composition analysis of Martian dust before it even looked at rock,” Allwood said.

That’s just a small taste of what PIXL, combined with the arm’s other instruments, is expected to reveal as it zeroes in on promising geological features over the weeks and months ahead.

Scientists say Jezero Crater was a crater lake billions of years ago, making it a choice landing site for Perseverance. The crater has long since dried out, and the rover is now picking its way across its red, broken floor.

“If life was there in Jezero Crater, the evidence of that life could be there,” said Allwood, a key member of the Perseverance “arm science” team. 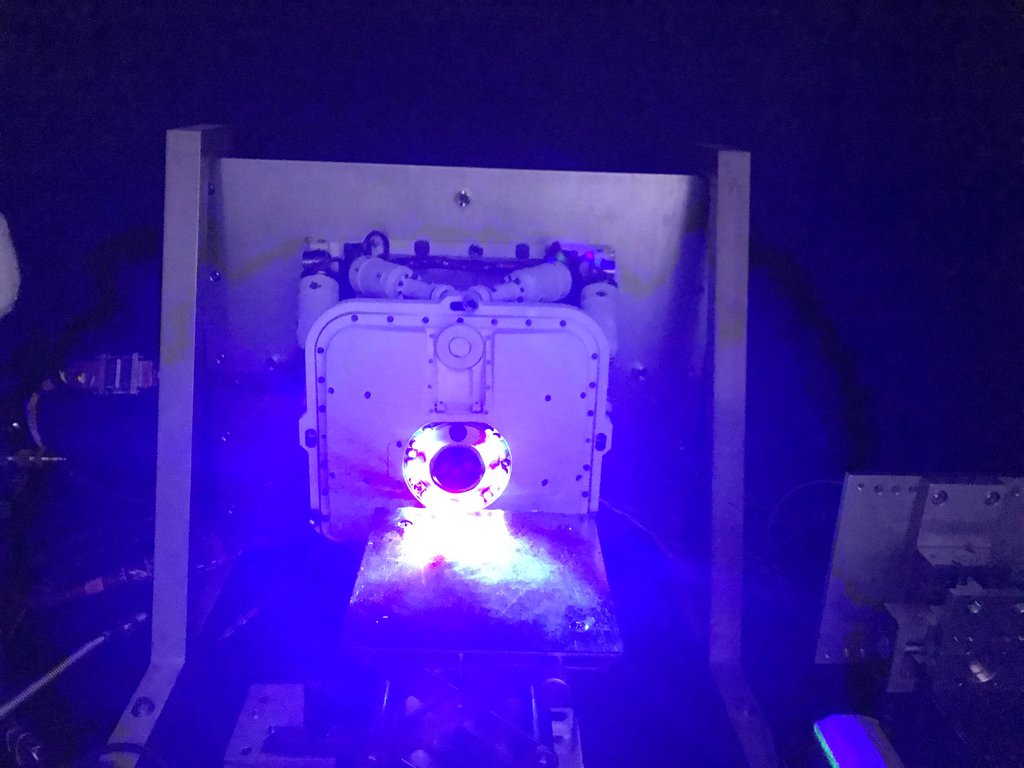 PIXL, one of seven instruments aboard NASA's Perseverance Mars rover, is equipped with light diodes circling its opening to take pictures of rock targets in the dark. Using artificial intelligence, PIXL relies on the images to determine how far away it is from a target to be scanned.

To get a detailed profile of rock textures, contours, and composition, PIXL’s maps of the chemicals throughout a rock can be combined with mineral maps produced by the SHERLOC instrument and its partner, WATSON. SHERLOC – short for Scanning Habitable Environments with Raman & Luminescence for Organics & Chemicals – uses an ultraviolet laser to identify some of the minerals in the rock, while WATSON takes closeup images that scientists can use to determine grain size, roundness, and texture, all of which can help determine how the rock was formed.

Early WATSON closeups have already yielded a trove of data from Martian rocks, the scientists said, such as a variety of colors, sizes of grains in the sediment, and even the presence of “cement” between the grains. Such details can provide important clues about formation history, water flow, and ancient, potentially habitable Martian environments. And combined with those from PIXL, they can provide a broader environmental and even historical snapshot of Jezero Crater.

“What is the crater floor made out of? What were the conditions like on the crater floor?” asks Luther Beegle of JPL, SHERLOC’s principal investigator. “That does tell us a lot about the early days of Mars, and potentially how Mars formed. If we have an idea of what the history of Mars is like, we’ll be able to understand the potential for finding evidence of life.” 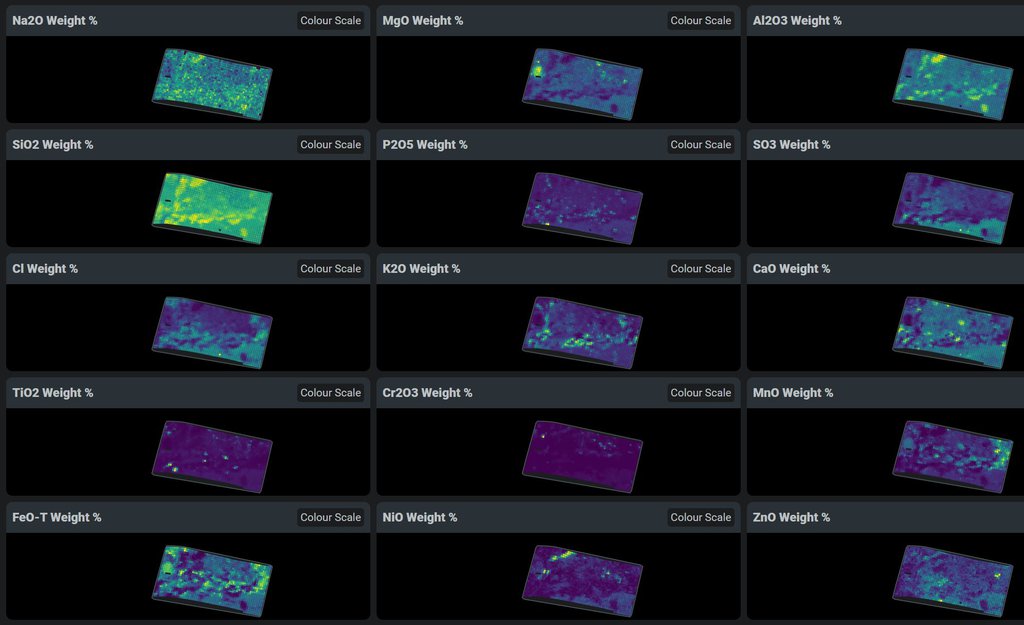 This data shows chemicals detected within a single rock on Mars by PIXL, one of the instruments on the end of the robotic arm aboard NASA’s Perseverance Mars rover. PIXL allows scientists to study where specific chemicals can be found within an area as small as a postage stamp.

While the rover has significant autonomous capabilities, such as driving itself across the Martian landscape, hundreds of earthbound scientists are still involved in analyzing results and planning further investigations.

“There are almost 500 people on the science team,” Beegle said. “The number of participants in any given action by the rover is on the order of 100. It’s great to see these scientists come to agreement in analyzing the clues, prioritizing each step, and putting together the pieces of the Jezero science puzzle.”

That will be critical when the Mars 2020 Perseverance rover collects its first samples for eventual return to Earth. They’ll be sealed in superclean metallic tubes on the Martian surface so that a future mission could collect them and send back to the home planet for further analysis.

Despite decades of investigation on the question of potential life, the Red Planet has stubbornly kept its secrets.

“Mars 2020, in my view, is the best opportunity we will have in our lifetime to address that question,” said Kenneth Williford, the deputy project scientist for Perseverance.

The geological details are critical, Allwood said, to place any indication of possible life in context, and to check scientists’ ideas about how a second example of life’s origin could come about.

Combined with other instruments on the rover, the detectors on the arm, including SHERLOC and WATSON, could make humanity’s first discovery of life beyond Earth.