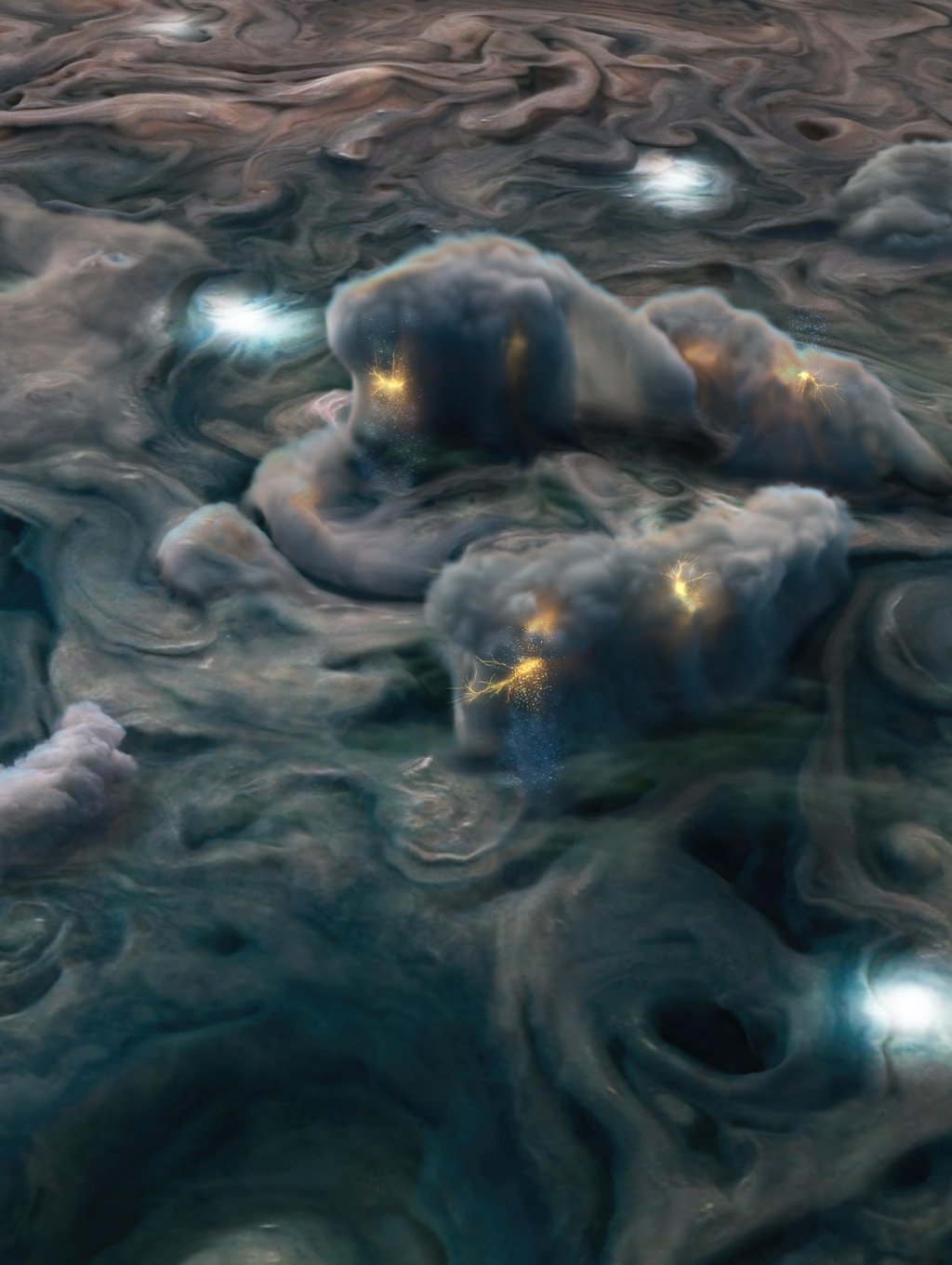 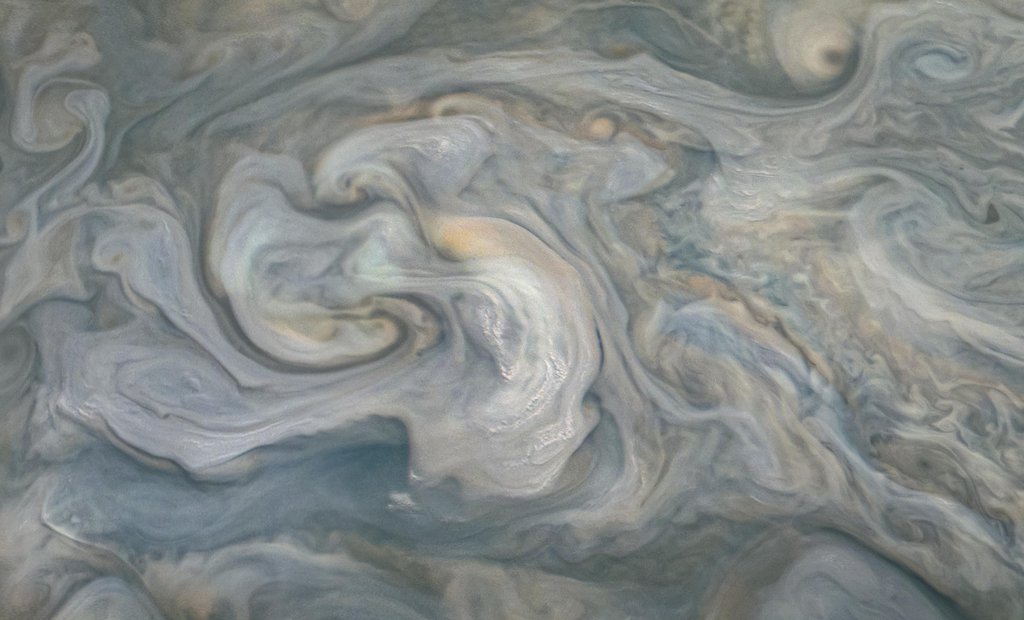 In the center of this JunoCam image, small, bright pop-up clouds seen rise above the surrounding features. Clouds like these are thought to be the tops of violent thunderstorms responsible for shallow lighting.
Credit: NASA/JPL-Caltech/SwRI/MSSS/Kevin M. Gill © CC BY
Full Image Details

The spacecraft may have found where the colorless gas has been hiding on the solar system's biggest planetary inhabitant.

Other new findings suggest the violent thunderstorms for which the gas giant is known may form slushy ammonia-rich hailstones Juno's science team calls "mushballs"; they theorize that mushballs essentially kidnap ammonia and water in the upper atmosphere and carry them into the depths of Jupiter's atmosphere.

The shallow-lightning findings will be published Thursday, Aug. 6, in the journal Nature, while the mushballs research is currently available online in the Journal of Geophysical Research: Planets.

Since NASA's Voyager mission first saw Jovian lightning flashes in 1979, it has been thought that the planet's lightning is similar to Earth's, occurring only in thunderstorms where water exists in all its phases - ice, liquid, and gas. At Jupiter this would place the storms around 28 to 40 miles (45 to 65 kilometers) below the visible clouds, with temperatures that hover around 32 degrees Fahrenheit (0 degrees Celsius, the temperature at which water freezes). Voyager, and all other missions to the gas giant prior to Juno, saw lightning as bright spots on Jupiter's cloud tops, suggesting that the flashes originated in deep water clouds. But lightning flashes observed on Jupiter's dark side by Juno's Stellar Reference Unit tell a different story.

Becker and her team suggest that Jupiter's powerful thunderstorms fling water-ice crystals high up into the planet's atmosphere, over 16 miles (25 kilometers) above Jupiter's water clouds, where they encounter atmospheric ammonia vapor that melts the ice, forming a new ammonia-water solution. At such lofty altitude, temperatures are below minus 126 degrees Fahrenheit (minus 88 degrees Celsius) - too cold for pure liquid water to exist.

This animation takes the viewer on a simulated journey into Jupiter's exotic high-altitude electrical storms. Get an up-close view of Mission Juno's newly discovered "shallow lighting" flashes and dive into the violent atmospheric jet of the Nautilus cloud.

"At these altitudes, the ammonia acts like an antifreeze, lowering the melting point of water ice and allowing the formation of a cloud with ammonia-water liquid," said Becker. "In this new state, falling droplets of ammonia-water liquid can collide with the upgoing water-ice crystals and electrify the clouds. This was a big surprise, as ammonia-water clouds do not exist on Earth."

"Previously, scientists realized there were small pockets of missing ammonia, but no one realized how deep these pockets went or that they covered most of Jupiter,"said Scott Bolton, Juno's principal investigator at the Southwest Research Institute in San Antonio. "We were struggling to explain the ammonia depletion with ammonia-water rain alone, but the rain couldn't go deep enough to match the observations. I realized a solid, like a hailstone, might go deeper and take up more ammonia. When Heidi discovered shallow lightning, we realized we had evidence that ammonia mixes with water high in the atmosphere, and thus the lightning was a key piece of the puzzle." 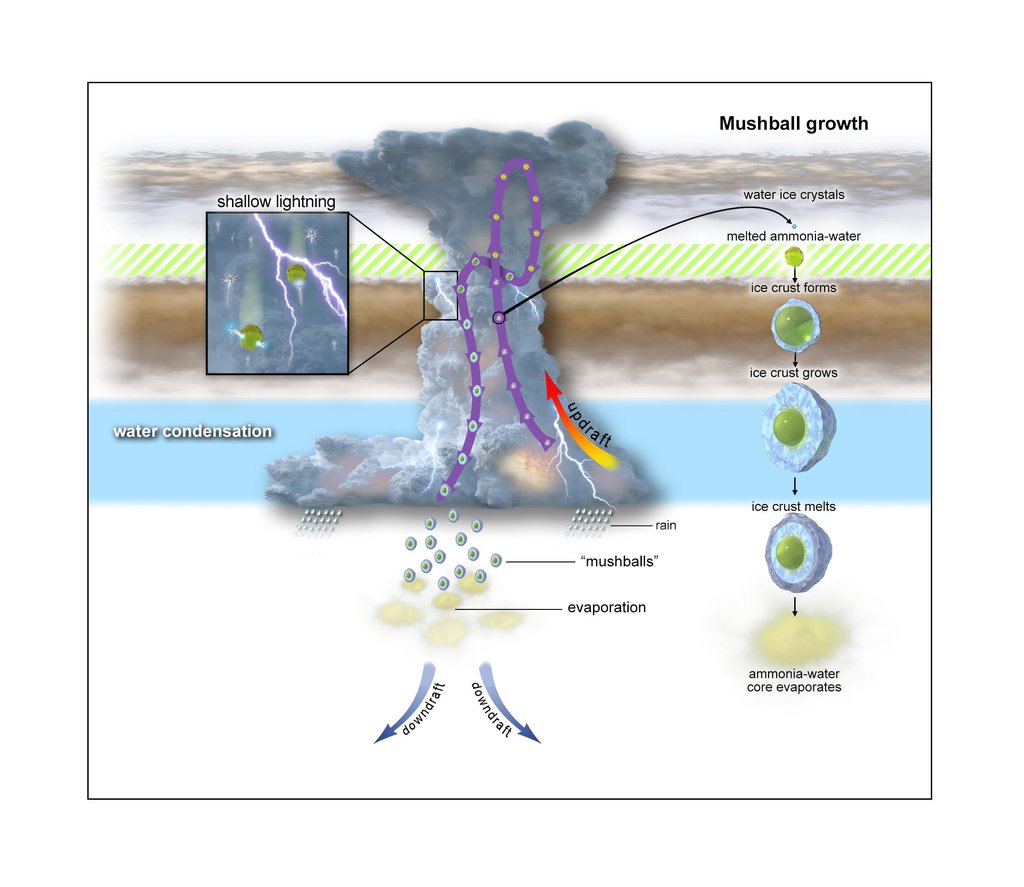 A second paper, released yesterday in the Journal of Geophysical Research: Planets, envisions the strange brew of 2/3 water and 1/3 ammonia gas that becomes the seed for Jovian hailstones, known as mushballs. Consisting of layers of water-ammonia slush and ice covered by a thicker water-ice crust, mushballs are generated in a similar manner as hail is on Earth - by growing larger as they move up and down through the atmosphere.

"Eventually, the mushballs get so big, even the updrafts can't hold them, and they fall deeper into the atmosphere, encountering even warmer temperatures, where they eventually evaporate completely," said Tristan Guillot, a Juno co-investigator from the Université Côte d'Azur in Nice, France, and lead author of the second paper. "Their action drags ammonia and water down to deep levels in the planet's atmosphere. That explains why we don't see much of it in these places with Juno's Microwave Radiometer."

"Combining these two results was critical to solving the mystery of Jupiter's missing ammonia," said Bolton. "As it turned out, the ammonia isn't actually missing; it is just transported down while in disguise, having cloaked itself by mixing with water. The solution is very simple and elegant with this theory: When the water and ammonia are in a liquid state, they are invisible to us until they reach a depth where they evaporate - and that is quite deep."

Understanding the meteorology of Jupiter enables us to develop theories of atmospheric dynamics for all the planets in our solar system as well as for the exoplanets being discovered outside our solar system. Comparing how violent storms and atmospheric physics work across the solar system allows planetary scientists to test theories under different conditions.

The solar-powered Jupiter explorer launched nine years ago today, on Aug. 5, 2011. And last month marked the fourth anniversary of its arrival at Jupiter. Since entering the gas giant's orbit, Juno has performed 27 science flybys and logged over 300 million miles (483 million kilometers).