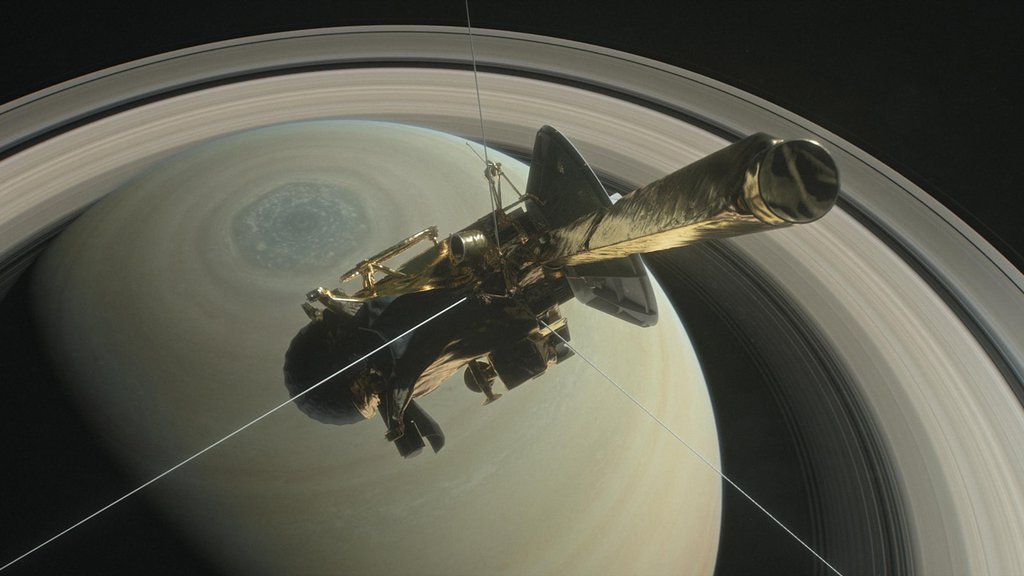 NASA's Cassini spacecraft is shown heading for the gap between Saturn and its rings during one of 22 such dives of the mission's finale in this illustration. The spacecraft will make a final plunge into the planet's atmosphere on Sept. 15.› Full image and caption
Credit: NASA/JPL-Caltech

NASA's Cassini spacecraft is 18 days from its mission-ending dive into the atmosphere of Saturn.

NASA's Cassini spacecraft is 18 days from its mission-ending dive into the atmosphere of Saturn. Its fateful plunge on Sept. 15 is a foregone conclusion -- an April 22 gravitational kick from Saturn's moon Titan placed the two-and-a-half ton vehicle on its path for impending destruction. Yet several mission milestones have to occur over the coming two-plus weeks to prepare the vehicle for one last burst of trailblazing science.

"The Cassini mission has been packed full of scientific firsts, and our unique planetary revelations will continue to the very end of the mission as Cassini becomes Saturn's first planetary probe, sampling Saturn's atmosphere up until the last second," said Linda Spilker, Cassini project scientist from NASA's Jet Propulsion Laboratory in Pasadena, California. "We'll be sending data in near real time as we rush headlong into the atmosphere -- it's truly a first-of-its-kind event at Saturn."

The spacecraft is expected to lose radio contact with Earth within about one to two minutes after beginning its descent into Saturn's upper atmosphere. But on the way down, before contact is lost, eight of Cassini's 12 science instruments will be operating. In particular, the spacecraft's ion and neutral mass spectrometer (INMS), which will be directly sampling the atmosphere's composition, potentially returning insights into the giant planet's formation and evolution. On the day before the plunge, other Cassini instruments will make detailed, high-resolution observations of Saturn's auroras, temperature, and the vortices at the planet's poles. Cassini's imaging camera will be off during this final descent, having taken a last look at the Saturn system the previous day (Sept. 14).

In its final week, Cassini will pass several milestones en route to its science-rich Saturn plunge. (Times below are predicted and may change slightly; see https://go.nasa.gov/2wbaCBT for updated times.)

As Cassini completes its 13-year tour of Saturn, its Grand Finale -- which began in April -- and final plunge are just the last beat. Following a four-year primary mission and a two-year extension, NASA approved an ambitious plan to extend Cassini's service by an additional seven years. Called the Cassini Solstice Mission, the extension saw Cassini perform dozens more flybys of Saturn's moons as the spacecraft observed seasonal changes in the atmospheres of Saturn and Titan. From the outset, the planned endgame for the Solstice Mission was to expend all of Cassini's maneuvering propellant exploring, then eventually arriving in the ultra-close Grand Finale orbits, ending with safe disposal of the spacecraft in Saturn's atmosphere.

"The end of Cassini's mission will be a poignant moment, but a fitting and very necessary completion of an astonishing journey," said Earl Maize, Cassini project manager at NASA's Jet Propulsion Laboratory in Pasadena, California. "The Grand Finale represents the culmination of a seven-year plan to use the spacecraft's remaining resources in the most scientifically productive way possible. By safely disposing of the spacecraft in Saturn's atmosphere, we avoid any possibility Cassini could impact one of Saturn's moons somewhere down the road, keeping them pristine for future exploration."

Since its launch in 1997, the findings of the Cassini mission have revolutionized our understanding of Saturn, its complex rings, the amazing assortment of moons and the planet's dynamic magnetic environment. The most distant planetary orbiter ever launched, Cassini started making astonishing discoveries immediately upon arrival and continues today. Icy jets shoot from the tiny moon Enceladus, providing samples of an underground ocean with evidence of hydrothermal activity. Titan's hydrocarbon lakes and seas are dominated by liquid ethane and methane, and complex pre-biotic chemicals form in the atmosphere and rain to the surface. Three-dimensional structures tower above Saturn's rings, and a giant Saturn storm circled the entire planet for most of a year. Cassini's findings at Saturn have also buttressed scientists' understanding of processes involved in the formation of planets.