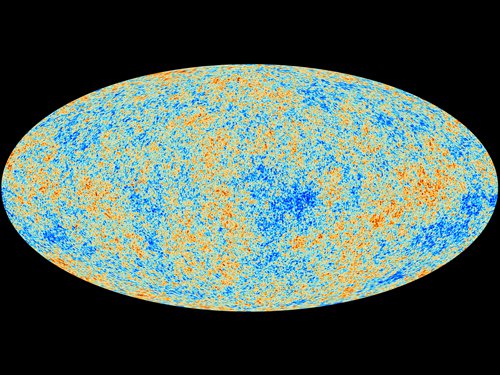 This map shows the oldest light in our universe, as detected with the greatest precision yet by the Planck mission. The ancient light, called the cosmic microwave background, was imprinted on the sky when the universe was 370,000 years old.› Full image and caption
Credit: ESA and the Planck Collaboration 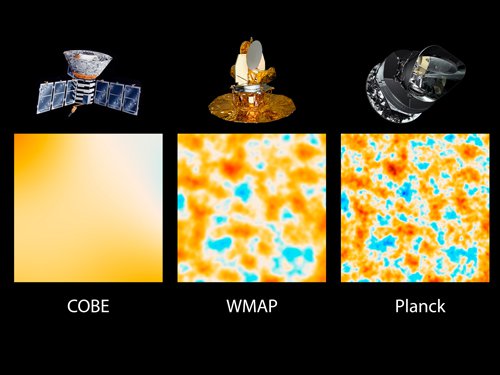 This graphic illustrates the evolution of satellites designed to measure ancient light leftover from the big bang that created our universe 13.8 billion years ago.› Full image and caption
Credit: NASA/JPL-Caltech/ESA 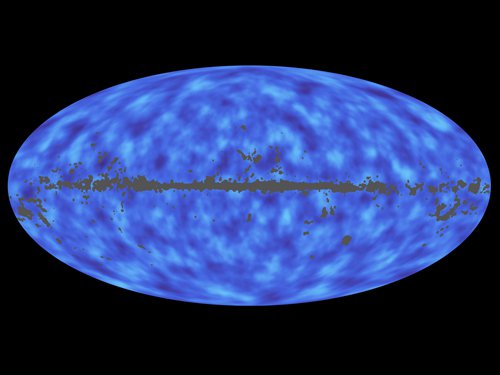 This full-sky map from the Planck mission shows matter between Earth and the edge of the observable universe. Regions with more mass show up as lighter areas while regions with less mass are darker.› Full image and caption
Credit: ESA/NASA/JPL-Caltech 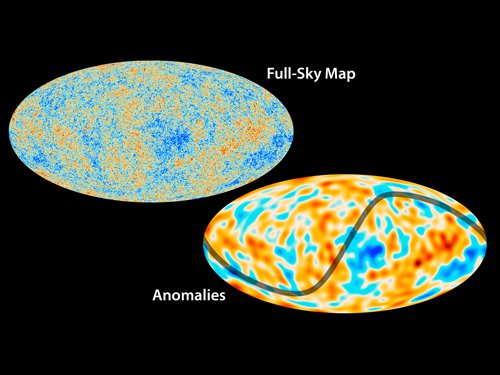 The top map shows Planck's all-sky map of the cosmic microwave background, whereas the bottom map shows the largest-scale features of the map.› Full image and caption
Credit: ESA and the Planck Collaboration 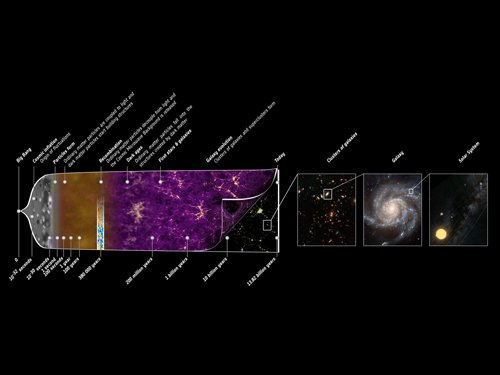 This illustration summarizes the almost 14-billion-year-long history of our universe. It shows the main events that occurred between the initial phase of the cosmos -- where its properties were almost uniform and punctuated only by tiny fluctuations -- to the rich variety of cosmic structure that we observe today, ranging from stars and planets to galaxies and galaxy clusters.› Full image and caption
Credit: ESA and the Planck Collaboration 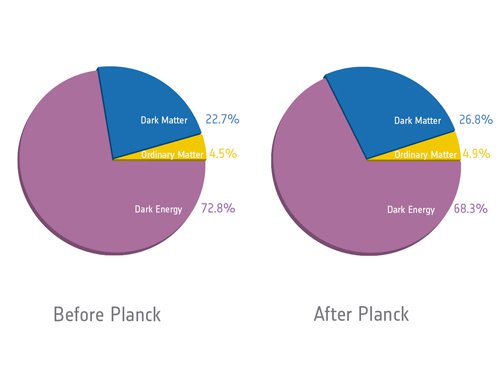 Planck's detailed map of the oldest light in our universe allowed scientists to take the most precise inventory of the universe's ingredients to date. The figure at left is based on previous data from nine years of observations using NASA's Wilkinson Microwave Anisotropy Probe, or WMAP, the predecessor to Planck.› Full image and caption
Credit: ESA and the Planck Collaboration

The Planck space mission has released the most accurate and detailed map ever made of the oldest light in the universe, revealing new information about its age, contents and origins.

PASADENA, Calif. -- The Planck space mission has released the most accurate and detailed map ever made of the oldest light in the universe, revealing new information about its age, contents and origins.

Planck is a European Space Agency mission. NASA contributed mission-enabling technology for both of Planck's science instruments, and U.S., European and Canadian scientists work together to analyze the Planck data.

The map results suggest the universe is expanding more slowly than scientists thought, and is 13.8 billion years old, 100 million years older than previous estimates. The data also show there is less dark energy and more matter, both normal and dark matter, in the universe than previously known. Dark matter is an invisible substance that can only be seen through the effects of its gravity, while dark energy is pushing our universe apart. The nature of both remains mysterious.

"Astronomers worldwide have been on the edge of their seats waiting for this map," said Joan Centrella, Planck program scientist at NASA Headquarters in Washington. "These measurements are profoundly important to many areas of science, as well as future space missions. We are so pleased to have worked with the European Space Agency on such a historic endeavor."

The map, based on the mission's first 15.5 months of all-sky observations, reveals tiny temperature fluctuations in the cosmic microwave background, ancient light that has traveled for billions of years from the very early universe to reach us. The patterns of light represent the seeds of galaxies and clusters of galaxies we see around us today.

"As that ancient light travels to us, matter acts like an obstacle course getting in its way and changing the patterns slightly," said Charles Lawrence, the U.S. project scientist for Planck at NASA's Jet Propulsion Laboratory in Pasadena, Calif. "The Planck map reveals not only the very young universe, but also matter, including dark matter, everywhere in the universe."

The age, contents and other fundamental traits of our universe are described in a simple model developed by scientists, called the standard model of cosmology. These new data have allowed scientists to test and improve the accuracy of this model with the greatest precision yet. At the same time, some curious features are observed that don't quite fit with the simple picture. For example, the model assumes the sky is the same everywhere, but the light patterns are asymmetrical on two halves of the sky, and there is a spot extending over a patch of sky that is larger than expected.

"On one hand, we have a simple model that fits our observations extremely well, but on the other hand, we see some strange features which force us to rethink some of our basic assumptions," said Jan Tauber, the European Space Agency's Planck project scientist based in the Netherlands. "This is the beginning of a new journey, and we expect our continued analysis of Planck data will help shed light on this conundrum."

The findings also test theories describing inflation, a dramatic expansion of the universe that occurred immediately after its birth. In far less time than it takes to blink an eye, the universe blew up by 100 trillion trillion times in size. The new map, by showing that matter seems to be distributed randomly, suggests that random processes were at play in the very early universe on minute "quantum" scales. This allows scientists to rule out many complex inflation theories in favor of simple ones.

"Patterns over huge patches of sky tell us about what was happening on the tiniest of scales in the moments just after our universe was born," Lawrence said.

Planck launched in 2009 and has been scanning the skies ever since, mapping the cosmic microwave background, the afterglow of the theorized big bang that created our universe. This relic radiation provides scientists with a snapshot of the universe 370,000 years after the big bang. Light existed before this time, but it was locked in a hot plasma similar to a candle flame, which later cooled and set the light free.

The cosmic microwave background is remarkably uniform over the entire sky, but tiny variations reveal the imprints of sound waves triggered by quantum fluctuations in the universe just moments after it was born. These imprints, appearing as splotches in the Planck map, are the seeds from which matter grew, forming stars and galaxies. Prior balloon-based and space missions learned a great deal by studying these patterns, including NASA's Wilkinson Microwave Anisotropy Probe (WMAP) and the Cosmic Background Explorer (COBE), which earned the COBE Team the 2006 Nobel Prize in Physics.

Planck is the successor to these satellites, covering a wider range of light frequencies with improved sensitivity and resolution. Its measurements reveal light patterns as small as one-twelfth of a degree on the sky.

"Planck is like the Ferrari of cosmic microwave background missions," said Krzysztof Gorski, a U.S Planck scientist at JPL. "You fine tune the technology to get more precise results. For a car, that can mean an increase in speed and winning races. For Planck, it results in giving astronomers a treasure trove of spectacular data, and bringing forth a deeper understanding of the properties and history of the universe."

The newly estimated expansion rate of the universe, known as Hubble's constant, is 67.15 plus or minus 1.2 kilometers/second/megaparsec. A megaparsec is roughly 3 million light-years. This is less than prior estimates derived from space telescopes, such as NASA's Spitzer and Hubble, using a different technique. The new estimate of dark matter content in the universe is 26.8 percent, up from 24 percent, while dark energy falls to 68.3 percent, down from 71.4 percent. Normal matter now is 4.9 percent, up from 4.6 percent.

Complete results from Planck, which still is scanning the skies, will be released in 2014.

NASA's Planck Project Office is based at JPL.