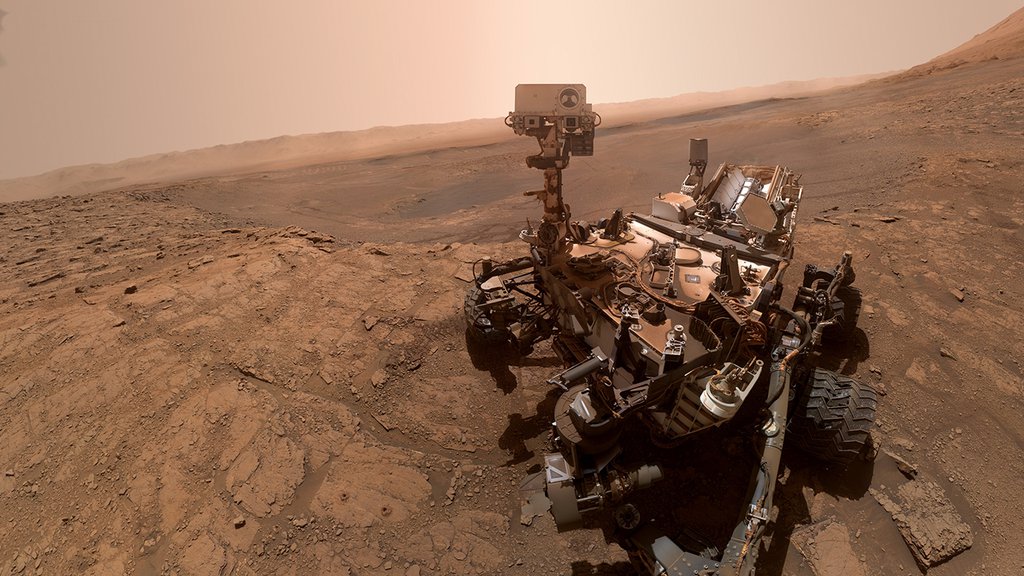 NASA's Curiosity rover took this selfie on Oct. 11, 2019, the 2,553rd Martian day, or sol, of its mission. The rover drilled twice in this location, which is nicknamed "Glen Etive."› Full image and caption
Credit: NASA/JPL-Caltech/MSSS 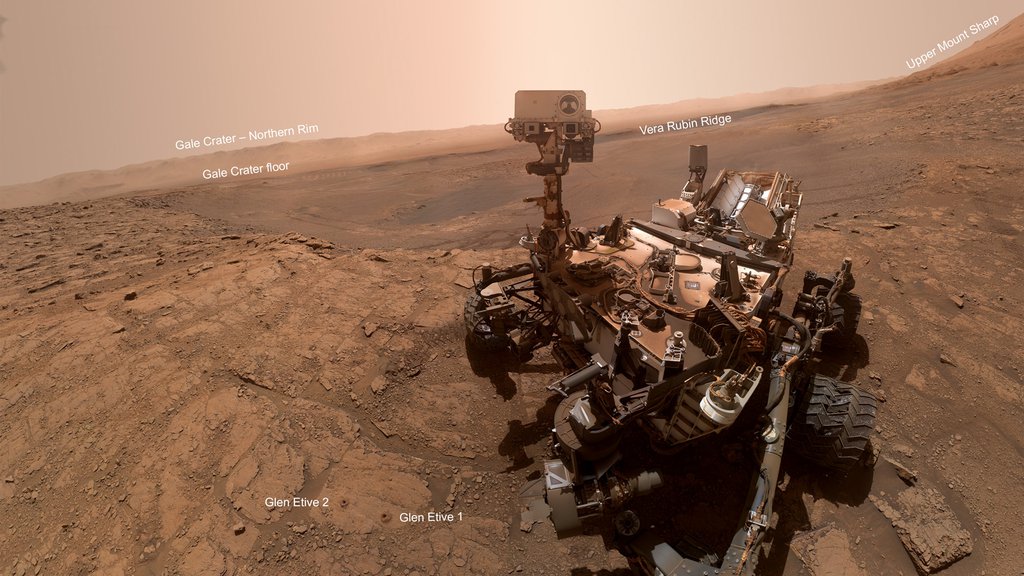 NASA's Curiosity rover took this selfie on Oct. 11, 2019, the 2,553rd Martian day, or sol, of its mission (annotated). The rover drilled twice in this location, which is nicknamed "Glen Etive."› Full image and caption
Credit: NASA/JPL-Caltech/MSSS

The NASA rover performed a special chemistry experiment at the location captured in its newest self-portrait.

A new selfie taken by NASA's Curiosity Mars rover is breathtaking, but it's especially meaningful for the mission's team: Stitched together from 57 individual images taken by a camera on the end of Curiosity's robotic arm, the panorama also commemorates only the second time the rover has performed a special chemistry experiment.

The selfie was taken on Oct. 11, 2019 (Sol 2,553) in a location named "Glen Etive" (pronounced "glen EH-tiv"), which is part of the "clay-bearing unit," a region the team has eagerly awaited reaching since before Curiosity launched. Visible in the left foreground are two holes Curiosity drilled named "Glen Etive 1" (right) and "Glen Etive 2" (left) by the science team. The rover can analyze the chemical composition of rock samples by powderizing them with the drill, then dropping the samples into a portable lab in its belly called Sample Analysis at Mars (SAM).

About 984 feet (300 meters) behind the rover is Vera Rubin Ridge, which Curiosity departed nearly a year ago. Beyond the ridge, you can see the floor of Gale Crater and the crater's northern rim. Curiosity has been ascending Mount Sharp, a 3-mile-tall (5-kilometer-tall) mountain inside the crater.

The special chemistry experiment occurred on Sept. 24, 2019, after the rover placed the powderized sample from Glen Etive 2 into SAM. The portable lab contains 74 small cups used for testing samples. Most of the cups function as miniature ovens that heat the samples; SAM then "sniffs" the gases that bake off, looking for chemicals that hold clues about the Martian environment billions of years ago, when the planet was friendlier to microbial life.

But nine of SAM's 74 cups are filled with solvents the rover can use for special "wet chemistry" experiments. These chemicals make it easier for SAM to detect certain carbon-based molecules important to the formation of life, called organic compounds.

Because there's a limited number of wet-chemistry cups, the science team has been saving them for just the right conditions. In fact, the experiment at Glen Etive is only the second time Curiosity has performed wet chemistry since touching down on Mars in August 2012.

"We've been eager to find an area that would be compelling enough to do wet chemistry," said SAM Principal Investigator Paul Mahaffy of NASA's Goddard Space Flight Center in Greenbelt, Maryland. "Now that we're in the clay-bearing unit, we've finally got it."

Clay-based rocks are good at preserving chemical compounds, which break down over time and when bombarded by radiation from space and the Sun. The science team is intrigued to see which organic compounds, if any, have been preserved in the rocks at Glen Etive. Understanding how this area formed will give them a better idea of how the Martian climate was changing billions of years ago.

While this marks Curiosity's second wet-chemistry experiment, it is the rover's first on a drilled sample. In December 2016, when Curiosity's drill malfunctioned, the rover still had a bit of sand that had been scooped up in a place called "Ogunquit Beach." It wasn't a drilled sample, but the team wasn't sure whether they'd get the drill working and be able to perform wet chemistry in the future. So they delivered the Ogunquit Beach sand into one of SAM's wet chemistry cups since there was still science to be gained.

Scientists consider Glen Etive a strategic location that will reveal more about how the clay-bearing unit formed. They built upon the valuable dress rehearsal at Ogunquit Beach to make adjustments that improved the recent experiment.

The results will be known next year. "SAM's data is extremely complex and takes time to interpret," Mahaffy said. "But we're all eager to see what we can learn from this new location, Glen Etive."

The individual images in this selfie were taken by the Mars Hand Lens Imager (MAHLI), a camera on the end of the rover's robotic arm. The images are stitched together into a panorama, and the robotic arm is digitally removed from the composite.