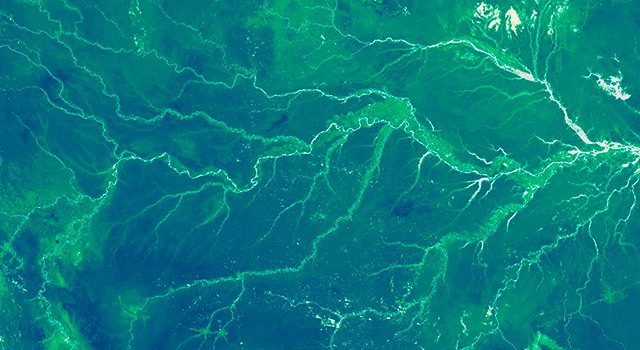 Two new spaceborne Earth-observing instruments will help scientists better understand how global forests and ecosystems are affected by changes in climate and land use change. This image of the Amazon rainforest is from a 2010 global map of the height of the world's forests based on multiple satellite datasets.
Credit: NASA Earth Observatory

NASA has selected a proposal from JPL for a new International Space Station instrument that will observe effects on global vegetation caused by changes in climate or land use.

NASA has selected proposals for two new instruments, including one from NASA's Jet Propulsion Laboratory, Pasadena, California, that will observe changes in global vegetation from the International Space Station. The sensors will give scientists new ways to see how forests and ecosystems are affected by changes in climate or in land use.

"We are excited to expand the use of the International Space Station to make critical Earth observations that will help scientists understand the diversity of forests and vegetation and their response to a changing climate," said John Grunsfeld, associate administrator of NASA's Science Mission Directorate in Washington. "These innovative Earth Venture Instruments will join a growing suite of NASA Earth-observing sensors to be deployed to the station starting this year."

Simon Hook of JPL is the principal investigator for the ECOsystem Spaceborne Thermal Radiometer Experiment on Space Station (ECOSTRESS). This project will use a high-resolution thermal infrared radiometer to measure plant evapotranspiration, the loss of water from growing leaves and evaporation from the soil. These data will reveal how ecosystems change with climate and provide a critical link between the water cycle and effectiveness of plant growth, both natural and agricultural.

The ECOSTRESS team has extensive experience in development and analysis of thermal infrared spectroscopic images of Earth's surface. Hook has served as project scientist for the Advanced Spaceborne Thermal Emission and Reflection Radiometer (ASTER) instrument on NASA's Earth Observing System Terra satellite and has been involved in numerous suborbital field campaigns. The team includes partnerships with the U.S. Department of Agriculture, Beltsville, Maryland, and Maricopa, Arizona; Princeton University, Princeton, New Jersey; and the University of Idaho, Moscow, Idaho.

Ralph Dubayah, of the University of Maryland, is the principal investigator for the Global Ecosystem Dynamics Investigation (GEDI) Lidar. This project will use a laser-based system to study a range of climates, including the observation of the forest canopy structure over the tropics, and the tundra in high northern latitudes. These data will help scientists better understand the changes in natural carbon storage within the carbon cycle from both human-influenced activities and natural climate variations.

The International Space Station provides several in-orbit capabilities useful to both instruments. The space station's orbit is inclined relative to the poles, providing more observation time of forests and vegetation over temperate land masses than possible from the polar orbits commonly used for other types of Earth observations. The GEDI laser requires significant power resources, which the space station can provide. Also, the relatively low altitude of the station's orbit, about 260 miles (418 kilometers) up, benefits GEDI by ensuring a higher return energy for laser pulses reflected from the ground.

In 2012, NASA selected the first Earth Venture Instrument investigation, the Tropospheric Emissions: Monitoring of Pollution (TEMPO) mission. TEMPO will be the first space-based sensor to monitor major air pollutants across North America hourly during daytime. It will share a ride on a commercial satellite as a hosted payload and orbit about 22,000 miles (35,400 kilometers) above the equator.