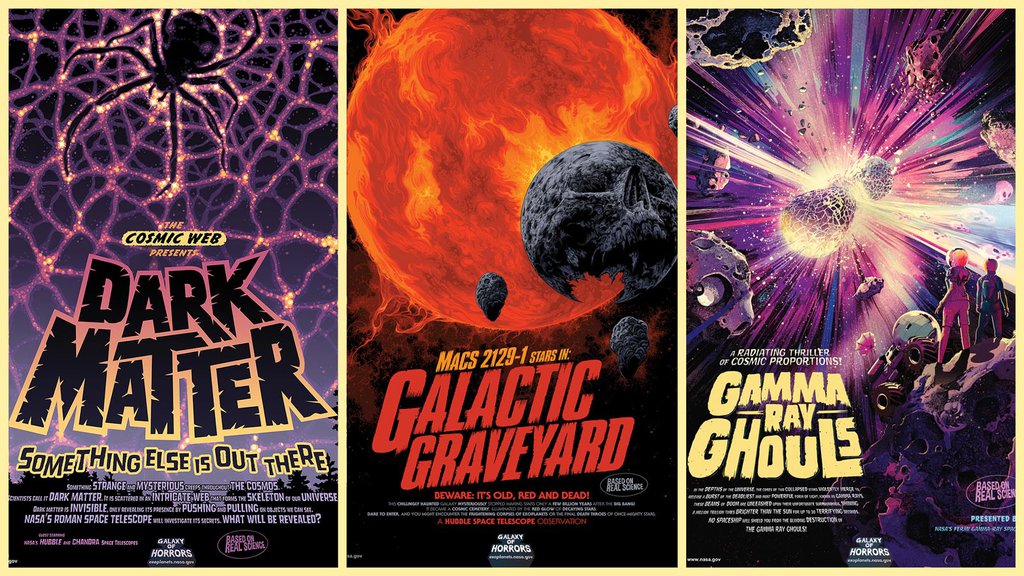 These NASA posters put an artistic spin on real cosmic phenomena. Done in the style of scary movie advertisements, they are free to download. 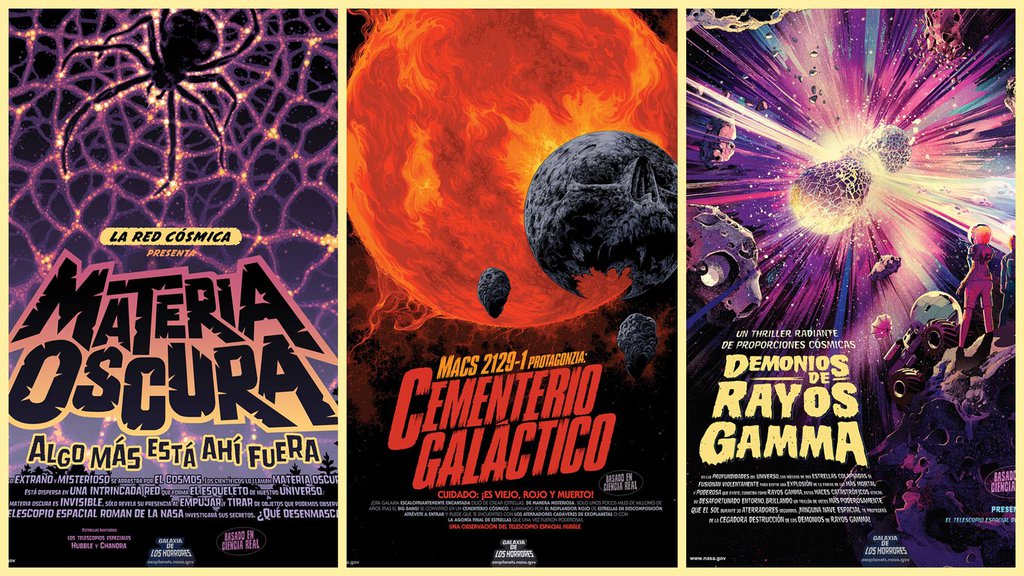 Available in , the new additions to NASA's Galaxy of Horrors poster series have some artistic fun with the real-life dead galaxies, gamma ray bursts, and dark matter real-world. Spanish and English

The eye-catching posters depict some of the universe's most mysterious astronomical phenomena with artistic flair.

With Halloween just around the corner, NASA has released its latest Galaxy of Horrors posters. Presented in the style of vintage horror movie advertisements, the new posters feature a dead galaxy, an explosive gamma ray burst caused by colliding stellar corpses, and ever-elusive dark matter.

As fun and creative as all three posters are, they're based on real phenomena. In a dead galaxy, new star birth has ceased and most remaining stars are the long-lived variety, which are small and red, giving the galaxy a crimson glow. Likewise, when dead stars collide, they sometimes create a gamma ray burst, one of the most energetic explosions in the universe. And while dark matter may sound like it's right out of a Halloween tale, its gravity keeps stars inside galaxies and holds groups of galaxies together in clusters - yet scientists don't know what this invisible stuff is made of.

Free to download, the posters were produced by NASA's Exoplanet Exploration Program Office, based at NASA's Jet Propulsion Laboratory in Southern California, with the input of astrophysicists. They're also available in Spanish: Cementerio Galáctico, Materia Oscura, and Demonions de Rayos Gamma.

"One of the things I really like about these posters is that if you spend some time studying the art and then maybe go learn a little more about each of these topics, you'll see there was a lot of thought by the artists about the choices they made to highlight the science," said Jason Rhodes, an astrophysicist at JPL who consulted on the project.

Take that dark matter poster, which carries the tagline "Something Else Is Out There." The massive spider seen crawling across the sky on a glowing web is pure fiction, but the concept alludes to something called the cosmic web, which is the large-scale organization of matter and dark matter in the universe: Thin filaments of normal matter and dark matter connect clusters of galaxies, like roadways between major cities. In fact, scientific visualizations of the cosmic web look similar to the spider web featured in the poster.

Similarly, the two narrow energy beams seen in the gamma ray burst poster reflect how they occur in real life, traveling in opposite directions from the colliding stellar corpses. The bursts are so intense that if such an event occurred "close" to the Earth, causing a beam to fire directly at our planet, the radiation and particles could do harm.

But the rarity of these events makes that extremely unlikely, according Judy Racusin, an astrophysicist at NASA's Goddard Space Flight Center who also consulted on the posters. In fact, astronomers estimate that a gamma ray burst goes off in our galaxy only about once every 10,000 years, but they are visible to us only about every 10,000,000 to 100,000,000 years. Even then, one of these events wouldn't necessarily pose a threat to our planet.

And while gamma ray bursts are real, the space travelers observing the event in the Galaxy of Horrors image are, of course, the product of creative license. "The poster art is a really fun way to imagine one of these happening," said Racusin. "But I wouldn't want to be those space travelers!"

To learn more about these posters and download both the Spanish and English versions for free, visit the Galaxy of Horrors webpage:

› Visit a universe of horrors
› Journey into a sinister solar system