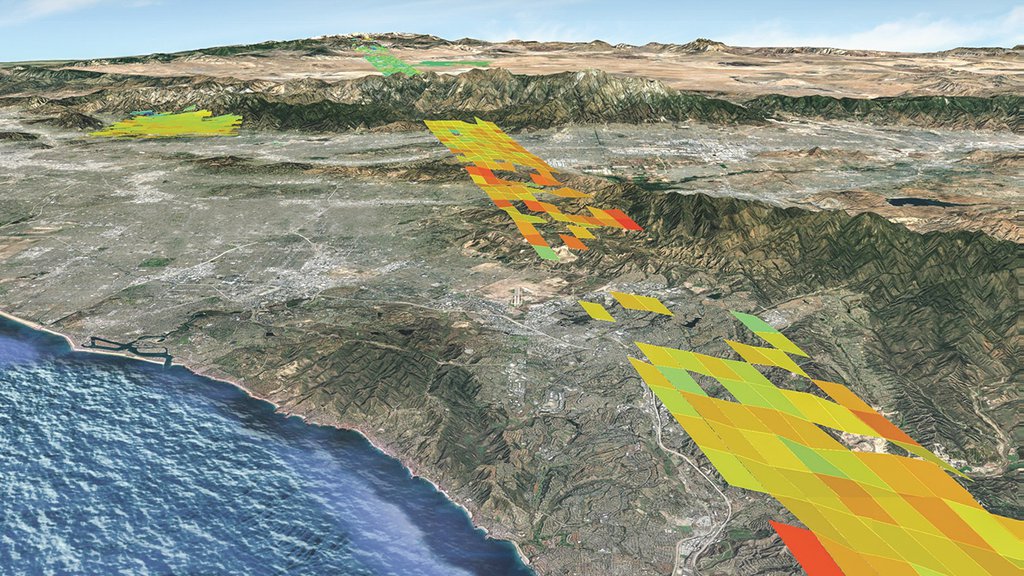 OCO-2 data are revealing subtle ways that carbon links everything on Earth, as demonstrated by a diverse special collection of research papers in the journal Science.

High-resolution satellite data from NASA's Orbiting Carbon Observatory-2 are revealing the subtle ways that carbon links everything on Earth - the ocean, land, atmosphere, terrestrial ecosystems and human activities. Scientists using the first 2 1/2 years of OCO-2 data have published a special collection of five papers today in the journal Science that demonstrates the breadth of this research. In addition to showing how drought and heat in tropical forests affected global carbon dioxide levels during the 2015-16 El Niño, other results from these papers focus on ocean carbon release and absorption, urban emissions and a new way to study photosynthesis. A final paper by OCO-2 Deputy Project Scientist Annmarie Eldering of NASA's Jet Propulsion Laboratory in Pasadena, California, and colleagues gives an overview of the state of OCO-2 science.

Emissions From Individual Cities and Volcanoes Visible From Space

More than 70 percent of carbon dioxide emissions from human activities comes from cities, but because the gas mixes rapidly into the atmosphere, urban emissions are challenging to isolate and analyze. Florian Schwandner of JPL and colleagues used OCO-2 observations to detect how carbon dioxide emissions vary around individual cities -- the first time this has been done with data collected in just a few minutes from space. Over Los Angeles and the surrounding area, they were able to detect differences as small as 1 percent of total atmospheric carbon dioxide concentrations within the air column below the satellite.

The OCO-2 measurements across Los Angeles were detailed enough to capture differences in concentrations within the city resulting from localized sources. They also tracked diminishing carbon dioxide concentrations as the spacecraft passed from over the crowded city to the suburbs and out to the sparsely populated desert to the north.

OCO-2's orbit also allowed it to observe significant carbon dioxide signals from isolated plumes of three volcanoes on the Pacific island nation of Vanuatu. One orbit directly downwind of Mt. Yasur, which has been erupting persistently since at least the 1700s, yielded a narrow string of carbon dioxide that was about 3.4 parts per million higher than background levels -- consistent with emissions of 41.6 kilotons of carbon dioxide a day. This is a valuable quantification of volcanic emissions, which are small compared to the average human emissions of about 100,000 kilotons per day.

This ocean region is usually a source of carbon dioxide to the atmosphere. As part of global ocean circulation, cold, carbon-dioxide-rich water wells up to the surface in this region, and the extra carbon dioxide outgasses to the atmosphere. Because El Niño events suppress this upwelling, scientists have conjectured that it reduces the ocean's carbon dioxide emissions and therefore causes a slowdown in the growth rate of atmospheric carbon dioxide concentrations. However, until OCO-2, there haven't been adequate atmospheric observations over the remote tropical Pacific to confirm this theory.

OCO-2 data show that in the first few months of the 2015-16 El Niño, the rate of carbon dioxide released from the tropical Pacific to the atmosphere decreased by 26 to 54 percent. That translates to a short-term reduction of 0.4 to 0.5 parts per million in atmospheric concentration, or close to 0.1 percent of total atmospheric carbon dioxide.

A change of one-tenth of one percent in carbon dioxide may sound negligible, but it occurred over a region in the Pacific Ocean about the size of the entire continent of Australia. This reduction in carbon dioxide emissions for a few months was strong enough that it could be observed by OCO-2 and the National Oceanic and Atmospheric Administration's Tropical Pacific Observing System of buoys, which directly measure carbon dioxide concentrations at the surface of the ocean. The record uptick in atmospheric carbon dioxide that occurred in 2015 and 2016 would have been even greater without this decrease in tropical Pacific Ocean emissions.

With OCO-2, scientists can observe these tiny changes for the first time, a first step toward understanding the sensitivity of the carbon cycle to climate variations on a scale of years to decades.

A New Way to Measure Photosynthesis

Besides carbon dioxide, OCO-2's high-resolution spectrometers can observe solar-induced fluorescence, or SIF. This radiation, emitted by chlorophyll molecules in plants, indicates that photosynthesis is occurring. SIF provides valuable insight into global photosynthesis because it captures photosynthesis during the growing season and also its slowdown, for example, over evergreen forests in winter, when trees maintain chlorophyll but stop absorbing carbon dioxide from the atmosphere.

Ying Sun of Cornell University in Ithaca, New York, and colleagues report on OCO-2's unique SIF measurements, which provide a much higher spatial resolution than any previous system. The improved resolution enabled the scientists to perform the first-ever validation of SIF from concurrent airborne observations.

OCO-2's smaller image "footprint" on Earth allowed the researchers to do a more direct comparison of the satellite measurements with ground-based measurements of flows of carbon dioxide between plants and the air. They found a consistent relationship between SIF and carbon dioxide uptake in plants across different types of ecosystems. This finding sets the direction for in-depth studies that may further illuminate the relationship between SIF and global photosynthesis.