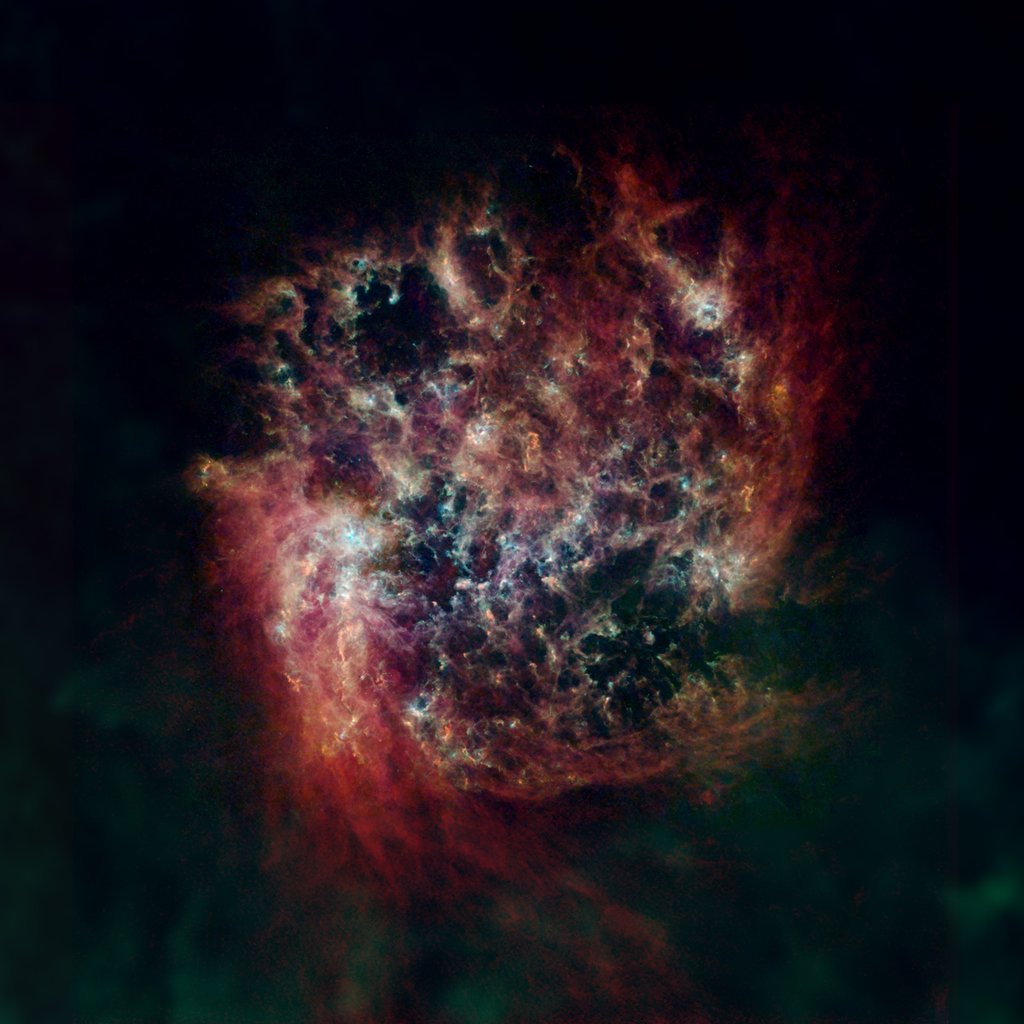 The Large Magellanic Cloud (LMC) is a satellite of the Milky Way, containing about 30 billion stars. Seen here in a far-infrared and radio view, the LMC’s cool and warm dust are shown in green and blue, respectively, with hydrogen gas in red.

The stunning perspectives show four of our galactic neighbors in a different light.

New images using data from ESA (European Space Agency) and NASA missions showcase the dust that fills the space between stars in four of the galaxies closest to our own Milky Way. More than striking, the snapshots are also a scientific trove, lending insight into how dramatically the density of dust clouds can vary within a galaxy.

With a consistency similar to smoke, dust is created by dying stars and is one of the materials that forms new stars. The dust clouds observed by space telescopes are constantly shaped and molded by exploding stars, stellar winds, and the effects of gravity. Almost half of all the starlight in the universe is absorbed by dust. Many of the heavy chemical elements essential to forming planets like Earth are locked up in dust grains in interstellar space. So understanding dust is an essential part of understanding our universe. 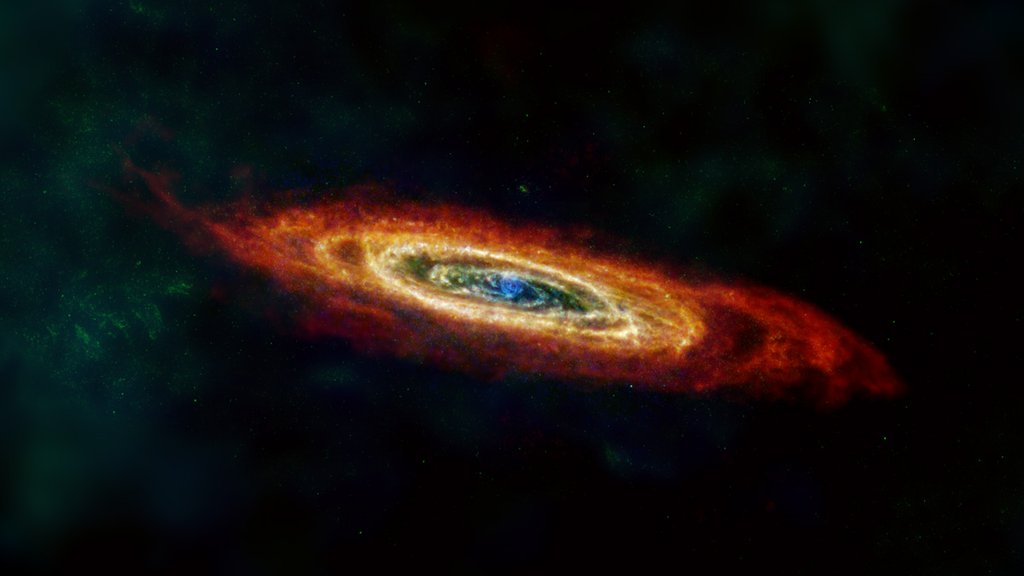 The Andromeda galaxy, or M31, is shown here in far-infrared and radio wavelengths of light. Some of the hydrogen gas (red) that traces the edge of Andromeda’s disc was pulled in from intergalactic space, and some was torn away from galaxies that merged with Andromeda far in the past.

The new observations were made possible through the work of ESA’s Herschel Space Observatory, which operated from 2009 to 2013. NASA’s Jet Propulsion Laboratory in Southern California contributed key parts of two instruments on the spacecraft. Herschel’s supercold instruments were able to detect the thermal glow of dust, which is emitted as far-infrared light, a range of wavelengths longer than what human eyes can detect.

Herschel’s images of interstellar dust provide high-resolution views of fine details in these clouds, revealing intricate substructures. But the way the space telescope was designed meant that it often couldn’t detect light from more spread out and diffuse clouds, especially in the outer regions of galaxies, where the gas and dust become sparse and thus fainter.

For some nearby galaxies, that meant Herschel missed up to 30% of all the light given off by dust. With such a significant gap, astronomers struggled to use the Herschel data to understand how dust and gas behaved in these environments. To fill out the Herschel dust maps, the new images combine data from three other missions: ESA’s retired Planck observatory, along with two retired NASA missions, the Infrared Astronomical Satellite (IRAS) and Cosmic Background Explorer (COBE).

The images show the Andromeda galaxy, also known as M31; the Triangulum galaxy, or M33; and the Large and Small Magellanic Clouds – dwarf galaxies orbiting the Milky Way that do not have the spiral structure of the Andromeda and Triangulum galaxies. All four are within 3 million light-years of Earth. 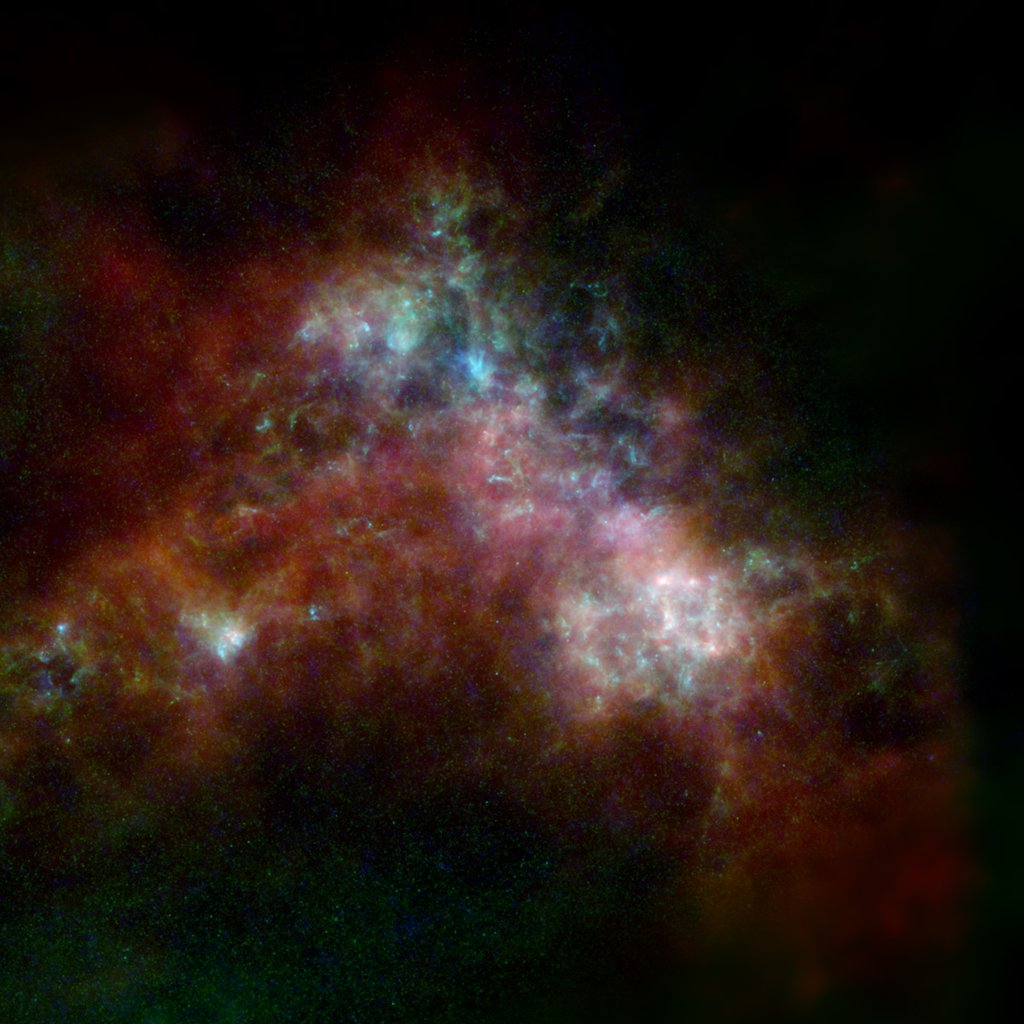 The Small Magellanic Cloud is a satellite of the Milky Way, containing about 3 billion stars. This far-infrared and radio view of it shows the cool (green) and warm (blue) dust, as well as the hydrogen gas (red).

In the images, red indicates hydrogen gas, the most common element in the universe. This data was collected using multiple radio telescopes located around the globe. The image of the Large Magellanic Cloud shows a red tail coming off the bottom left of the galaxy that was likely created when it collided with the Small Magellanic Cloud about 100 million years ago. Bubbles of empty space indicate regions where stars have recently formed, because intense winds from the newborn stars blow away the surrounding dust and gas. The green light around the edges of those bubbles indicates the presence of cold dust that has piled up as a result of those winds. Warmer dust, shown in blue, indicates where stars are forming or other processes have heated the dust.

Many heavy elements in nature – including carbon, oxygen, and iron – can get stuck to dust grains, and the presence of different elements changes the way dust absorbs starlight. This, in turn, affects the view astronomers get of events like star formation.

In the densest dust clouds, almost all the heavy elements can get locked up in dust grains, which increases the dust-to-gas ratio. But in less dense regions, the destructive radiation from newborn stars or shockwaves from exploding stars will smash the dust grains and return some of those locked-up heavy elements back into the gas, changing the ratio once again. Scientists who study interstellar space and star formation want to better understand this ongoing cycle. The Herschel images show that the dust-to-gas ratio can vary within a single galaxy by up to a factor of 20, far more than previously estimated. 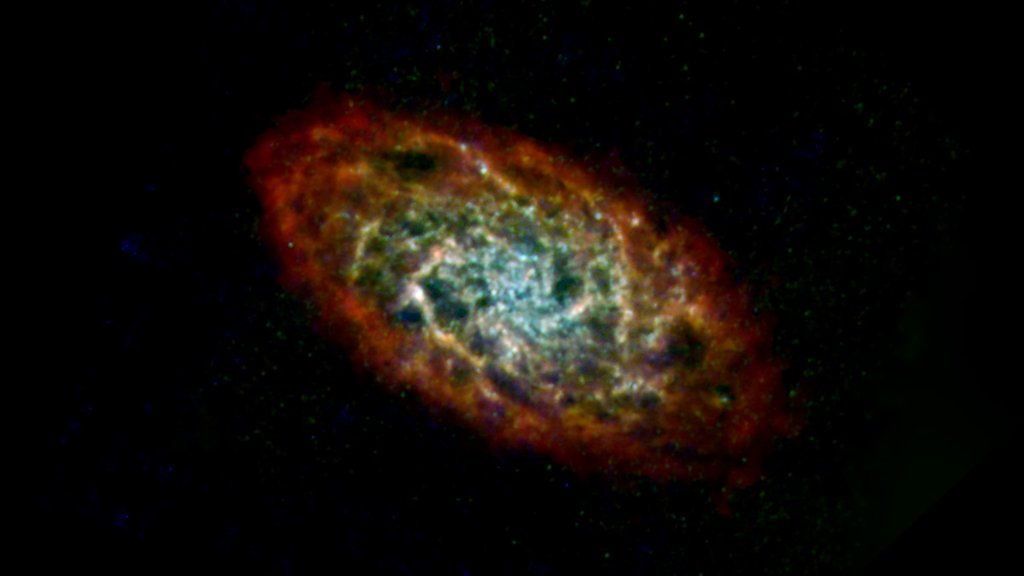 The Triangulum galaxy, or M33, is shown here in far-infrared and radio wavelengths of light. Some of the hydrogen gas (red) that traces the edge of the Triangulum’s disc was pulled in from intergalactic space, and some was torn away from galaxies that merged with Triangulum far in the past.

“These improved Herschel images show us that the dust ‘ecosystems’ in these galaxies are very dynamic,” said Christopher Clark, an astronomer at the Space Science Telescope Institute in Maryland, who led the work to create the new images.

NASA’s Herschel Project Office was based at JPL. The NASA Herschel Science Center was based at IPAC at Caltech in Pasadena, California. Caltech manages JPL for NASA.

Launched in 1983, NASA’s IRAS was the first space telescope to detect infrared light, setting the stage for future observatories like the agency’s Spitzer Space Telescope and James Webb Space Telescope. IRAS was a joint project of NASA, the Netherlands Agency for Aerospace Programmes, and the United Kingdom's Science and Engineering Research Council. JPL and NASA’s Ames Research Center managed the telescope development. IPAC provided expertise and support for the processing and analysis of data from IRAS, and NASA’s Infrared Science Archive (IRSA) at IPAC manages the IRAS archive.

The Planck observatory, launched in 2009, and COBE, launched in 1989, both studied the cosmic microwave background, or light left over from the big bang. The COBE satellite was developed by NASA’s Goddard Space Flight Center. NASA’s Planck Project Office was based at JPL, which also contributed mission-enabling technology for both of Planck’s science instruments. European, Canadian, and U.S. Planck scientists work together to analyze the Planck data. IPAC serves as the U.S. Planck Data Center, hosted at IRSA.