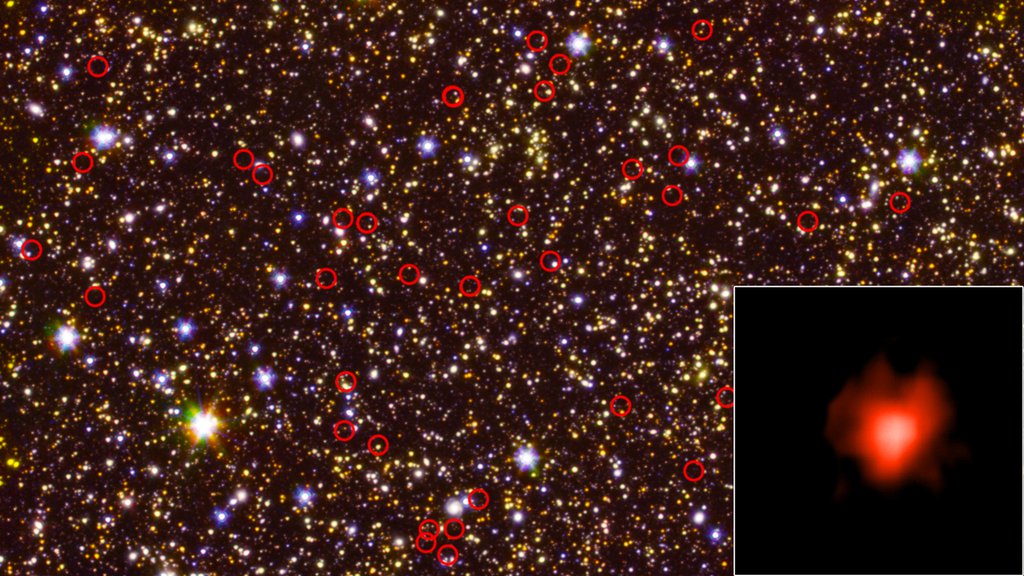 This deep-field view of the sky (center) taken by NASA's Hubble and Spitzer space telescopes is dominated by galaxies - including some very faint, very distant ones - circled in red. The bottom right inset shows the light collected from one of those galaxies during a long-duration observation.› Full image and caption
Credit: NASA/JPL-Caltech/ESA/Spitzer/P. Oesch/S. De Barros/I.Labbe 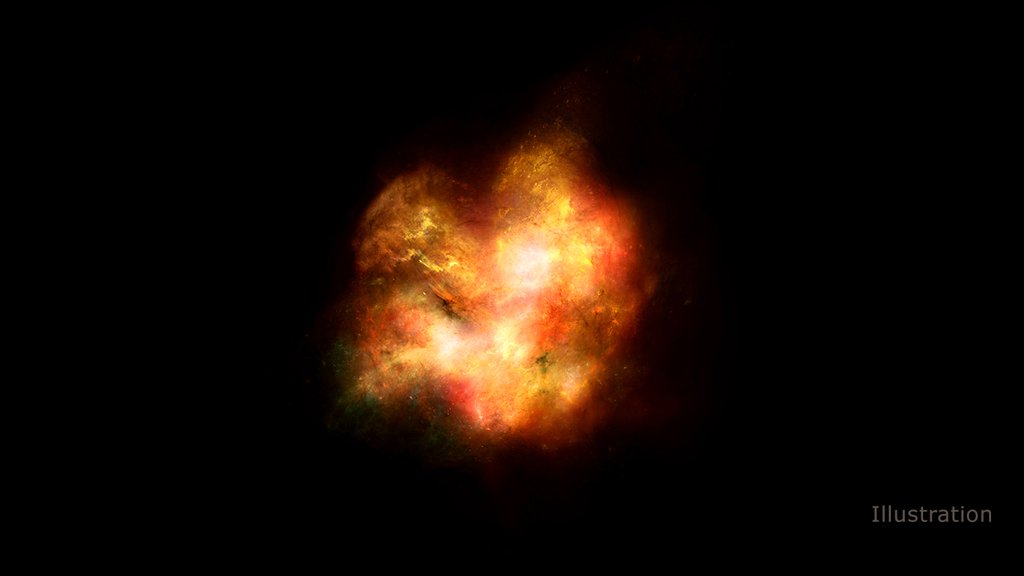 This artist's illustration shows what one of the very first galaxies in the universe might have looked like. High levels of violent star formation and star death would have illuminated the gas filling the space between stars, making the galaxy largely opaque and without a clear structure.
Credit: James Josephides (Swinburne Astronomy Productions)

An ambitious new study using NASA's Spitzer Space Telescope shows that ancient galaxies were brighter than scientists anticipated and that their light may have changed the universe.

NASA's Spitzer Space Telescope has revealed that some of the universe's earliest galaxies were brighter than expected. The excess light is a byproduct of the galaxies releasing incredibly high amounts of ionizing radiation. The finding offers clues to the cause of the Epoch of Reionization, a major cosmic event that transformed the universe from being mostly opaque to the brilliant starscape seen today.

In a new study, researchers report on observations of some of the first galaxies to form in the universe, less than 1 billion years after the big bang (or a little more than 13 billion years ago). The data show that in a few specific wavelengths of infrared light, the galaxies are considerably brighter than scientists anticipated. The study is the first to confirm this phenomenon for a large sampling of galaxies from this period, showing that these were not special cases of excessive brightness, but that even average galaxies present at that time were much brighter in these wavelengths than galaxies we see today.

No one knows for sure when the first stars in our universe burst to life. But evidence suggests that between about 100 million and 200 million years after the big bang, the universe was filled mostly with neutral hydrogen gas that had perhaps just begun to coalesce into stars, which then began to form the first galaxies. By about 1 billion years after the big bang, the universe had become a sparkling firmament. Something else had changed, too: Electrons of the omnipresent neutral hydrogen gas had been stripped away in a process known as ionization. The Epoch of Reionization - the changeover from a universe full of neutral hydrogen to one filled with ionized hydrogen - is well documented.

Before this universe-wide transformation, long-wavelength forms of light, such as radio waves and visible light, traversed the universe more or less unencumbered. But shorter wavelengths of light - including ultraviolet light, X-rays and gamma rays - were stopped short by neutral hydrogen atoms. These collisions would strip the neutral hydrogen atoms of their electrons, ionizing them.

But what could have possibly produced enough ionizing radiation to affect all the hydrogen in the universe? Was it individual stars? Giant galaxies? If either were the culprit, those early cosmic colonizers would have been different than most modern stars and galaxies, which typically don't release high amounts of ionizing radiation. Then again, perhaps something else entirely caused the event, such as quasars - galaxies with incredibly bright centers powered by huge amounts of material orbiting supermassive black holes.

"It's one of the biggest open questions in observational cosmology," said Stephane De Barros, lead author of the study and a postdoctoral researcher at the University of Geneva in Switzerland. "We know it happened, but what caused it? These new findings could be a big clue."

To peer back in time to the era just before the Epoch of Reionization ended, Spitzer stared at two regions of the sky for more than 200 hours each, allowing the space telescope to collect light that had traveled for more than 13 billion years to reach us.

As some of the longest science observations ever carried out by Spitzer, they were part of an observing campaign called GREATS, short for GOODS Re-ionization Era wide-Area Treasury from Spitzer. GOODS (itself an acronym: Great Observatories Origins Deep Survey) is another campaign that performed the first observations of some GREATS targets. The study, published in the Monthly Notices of the Royal Astronomical Society, also used archival data from NASA's Hubble Space Telescope.

Using these ultra-deep observations by Spitzer, the team of astronomers observed 135 distant galaxies and found that they were all particularly bright in two specific wavelengths of infrared light produced by ionizing radiation interacting with hydrogen and oxygen gases within the galaxies. This implies that these galaxies were dominated by young, massive stars composed mostly of hydrogen and helium. They contain very small amounts of "heavy" elements (like nitrogen, carbon and oxygen) compared to stars found in average modern galaxies.

These stars were not the first stars to form in the universe (those would have been composed of hydrogen and helium only) but were still members of a very early generation of stars. The Epoch of Reionization wasn't an instantaneous event, so while the new results are not enough to close the book on this cosmic event, they do provide new details about how the universe evolved at this time and how the transition played out.

"We did not expect that Spitzer, with a mirror no larger than a Hula-Hoop, would be capable of seeing galaxies so close to the dawn of time," said Michael Werner, Spitzer's project scientist at NASA's Jet Propulsion Laboratory in Pasadena, California. "But nature is full of surprises, and the unexpected brightness of these early galaxies, together with Spitzer's superb performance, puts them within range of our small but powerful observatory."

NASA's James Webb Space Telescope, set to launch in 2021, will study the universe in many of the same wavelengths observed by Spitzer. But where Spitzer's primary mirror is only 85 centimeters (33.4 inches) in diameter, Webb's is 6.5 meters (21 feet) - about 7.5 times larger - enabling Webb to study these galaxies in far greater detail. In fact, Webb will try to detect light from the first stars and galaxies in the universe. The new study shows that due to their brightness in those infrared wavelengths, the galaxies observed by Spitzer will be easier for Webb to study than previously thought.

"These results by Spitzer are certainly another step in solving the mystery of cosmic reionization," said Pascal Oesch, an assistant professor at the University of Geneva and a co-author on the study. "We now know that the physical conditions in these early galaxies were very different than in typical galaxies today. It will be the job of the James Webb Space Telescope to work out the detailed reasons why."

JPL manages the Spitzer Space Telescope mission for NASA's Science Mission Directorate in Washington. Science operations are conducted at the Spitzer Science Center at Caltech in Pasadena. Space operations are based at Lockheed Martin Space Systems in Littleton, Colorado. Data are archived at the Infrared Science Archive housed at IPAC at Caltech. Caltech manages JPL for NASA.