How Cold Can You Go? Cooler Tested for NASA Telescope 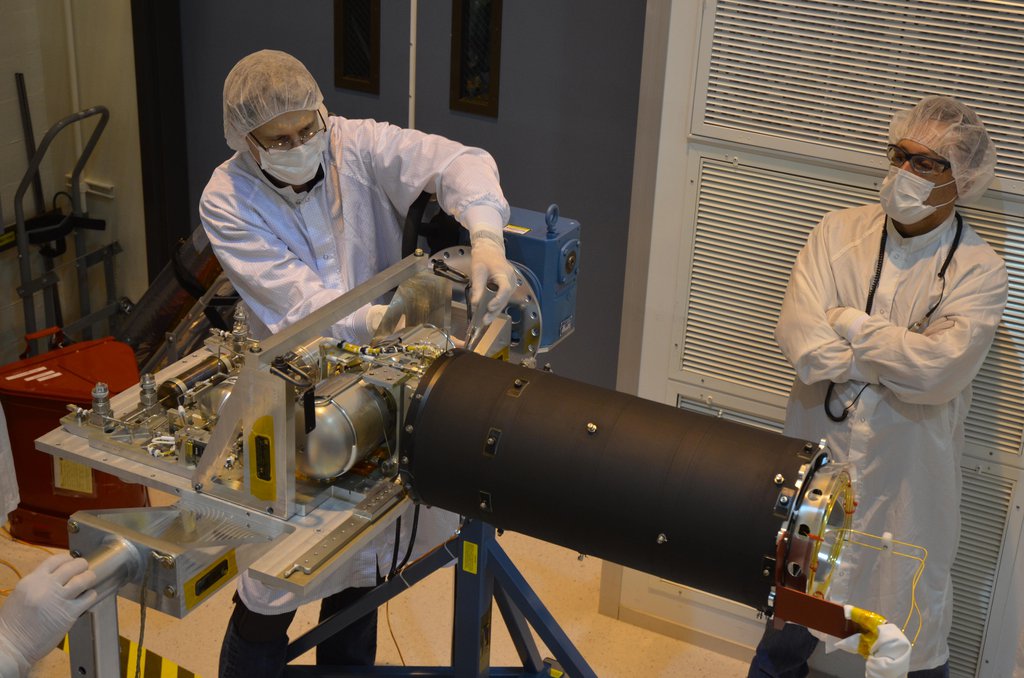 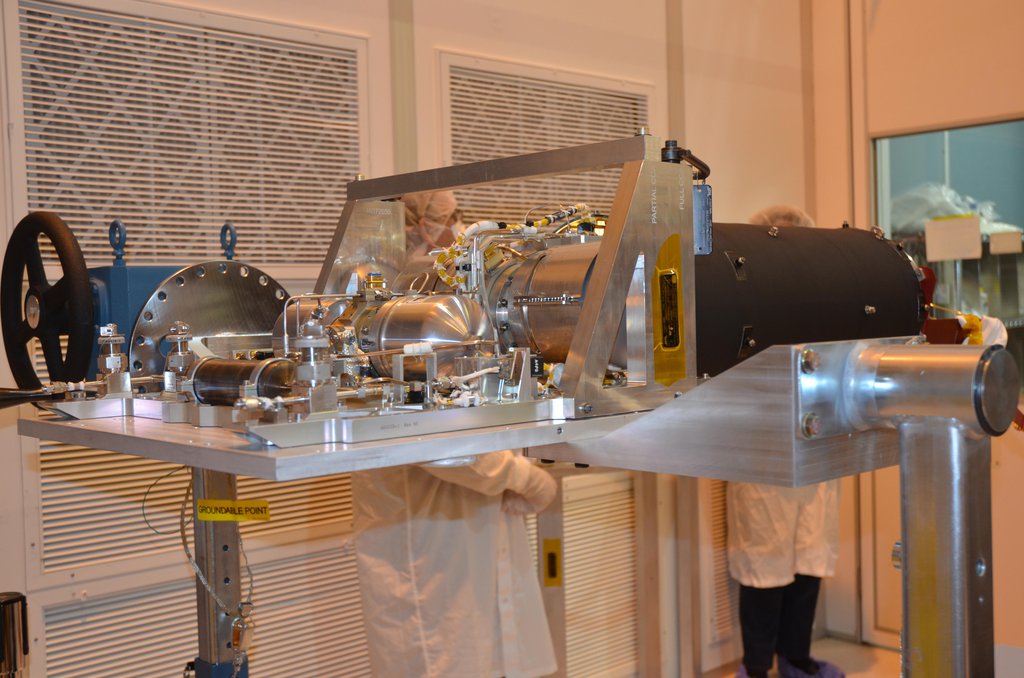 This image shows the cooling device for the Mid-Infrared Instrument, or MIRI, one of the James Webb Space Telescope's four instruments.
Credit: NASA/JPL-Caltech
Full Image Details

About the size of a household fridge, this cooler has a far more important role than chilling sodas and snacks. It is key to catching faint whispers of light from the very first stars born in our universe billions of years ago. The cooler will chill one of the Webb telescope's four instruments, called the Mid-Infrared Instrument, or MIRI, which will also study other stars, exoplanets and galaxies.

"When did stars start looking like they do today?" asks Michael Ressler, project scientist for the U.S. portion of the MIRI instrument at JPL. "MIRI will help us narrow in on the era of first light."

On May 24, MIRI's cooler officially passed its pre-ship review. Its main portion, called the cryocooler compressor assembly, was shipped May 26 to its next destination: the Northrop Grumman Aerospace Systems facility in Redondo Beach, California. There, the cooler will be united with the body of the Webb spacecraft. The MIRI instrument itself is currently at NASA's Goddard Space Flight Center in Greenbelt, Maryland, where it is part of the integrated telescope and instruments. Eventually, those components will make their way to Northrop Grumman too, where the whole observatory will come together in preparation for its momentous 2018 launch.

"We fully expect that the MIRI will open up a whole new territory of astronomy, enabled by this cooler," said John Mather, Webb's lead project scientist and Nobel laureate at NASA Goddard.

MIRI is a joint project of Europe and the United States, with the U.S. portion being managed by JPL. The MIRI cooler was developed by Northrop Grumman, and then later sent to JPL for testing to demonstrate its performance and verify its readiness for spaceflight. The Webb telescope mission itself is managed by NASA Goddard.

MIRI will be the coldest instrument onboard the telescope, operating at beyond-frostbite temperatures of no more than 6.7 degrees above absolute zero, or minus 448 degrees Fahrenheit. Why so cold? MIRI sees what is known as mid-infrared light, which is given off by objects at around room temperature. Desks, people and the air we breathe, for example, are aglow with mid-infrared light that we can't see with our eyes. Specialized instruments like MIRI are designed to pick up this mid-infrared glow, but they must be chilled to avoid background infrared light that can drown out what astronomers want to see.

By comparison, Webb's three other science instruments, which record near-infrared light, all need to be cold too, but not as cold. The telescope optics and near-infrared instruments passively reach temperatures of around 40 degrees above absolute zero, i.e., 40 Kelvin, which is about minus 388 degrees Fahrenheit, by simply being in the shade of the observatory's tennis court-sized sunshield.

"The instrument has to be cold enough to not detect itself," said Ressler, explaining that the instrument gives off its own heat. Moreover, MIRI's mid-infrared detectors, which convert light into electrical signals the way a camera chip inside a cell phone does to take photos, need to be chilled to less than 7 degrees above absolute zero to even work right.

Other infrared telescopes, such as NASA's Spitzer Space Telescope and Wide-field Infrared Survey Telescope (WISE), used thermos-bottle-like coolers filled with coolants, such as liquid helium and solid hydrogen, to chill their instruments. But those systems can be large and heavier to launch. Their biggest downside is that they have finite lifetimes, warming up when their coolants run out.

MIRI started out with a design like this, but was later changed to an active cooling system, which works more like a common refrigerator. The MIRI cooler, also called a cryocooler, can chill the instrument without the need for a consumable coolant.

"You can cool drinks with an ice chest full of ice, or you can put them in a fridge," said Konstantin Penanen, the cryocooler delivery manager at JPL. "Our cryocooler is equivalent to the fridge option." The ice in the ice chest eventually melts and then the drinks inside warm up, but the fridge uses electricity to keep things cool indefinitely.

The basic principle of active cooling is to compress a gas, then let it expand -- a process that cools the gas. The same thing happens in refrigerators and air conditioners, which are heat pumps that move heat from a colder place to a warmer place, in reverse of what occurs naturally. A gas or "refrigerant" is compressed by a pump, then allowed to expand where you want the cooling to happen. The process of expansion absorbs heat, and the expanded gas is pumped away and its absorbed heat is dumped away by a radiator. The gas is then recycled and recompressed and the process begins anew. Active cooling on the Webb telescope is much more complicated than a household refrigerator.

To avoid excess heat and vibrations affecting MIRI, the Webb telescope's designers had to place the majority of the cooler behind the telescope's massive sunshield. Webb's telescope and main instrument module are protected from the heat of the sun by a shade about as big as a tennis court. With the pumping portion of the cooler on the other side of the shield, a pair of refrigerant lines -- one feed line and one return line, each roughly one-sixteenth of an inch in diameter -- are used to connect it to MIRI. In total, the cooling system involves roughly 67 feet (20 meters) worth of the thin tubing that snakes delicately throughout the observatory, carrying the recirculating helium coolant.

"There's nothing quite like this," said Kalyani Sukhatme, the instrument's U.S. project manager at JPL. "One of the complexities of this system is how distributed it is."

The MIRI cooling system has four stages, chilling gas down successively to lower and lower temperatures. The first three stages make up the majority of the cooler and take place in the cold compressor assembly -- the largest portion of the cooler. That compressor, as well as its controlling electronics, recently passed cold and vibration tests at JPL. Engineers first fitted the compressor and their electronics into a special cold chamber and tested it, then they vibrated the compressor to mimic the effects of a rocket launch, and finally tested it once again in the cold chamber, checking-out its full range of performance.

The results showed that the device is twice as efficient as required. "If a lot of extra unanticipated heat is generated by the telescope, we can take care of it," said Sukhatme.

For more information about the MIRI instrument, visit:

For more information about the James Webb Space Telescope, visit: