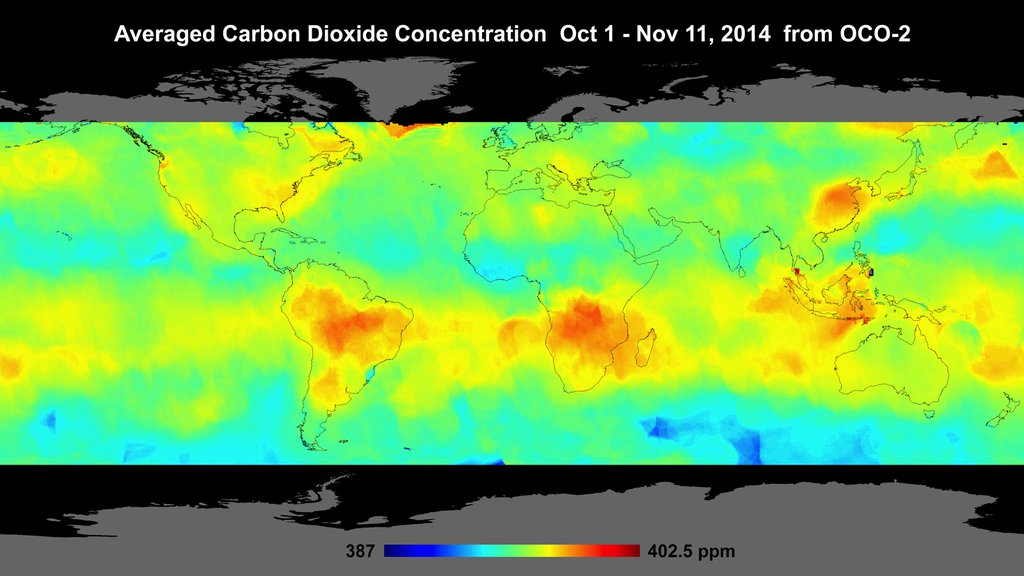 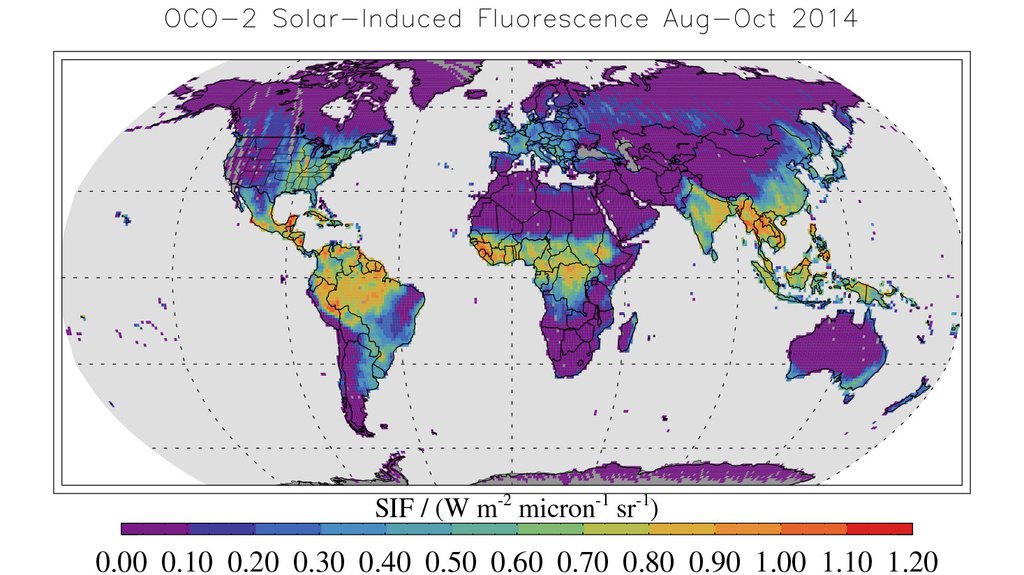 This map shows solar-induced fluorescence, a plant process that occurs during photosynthesis, from Aug. through Oct. 2014 as measured by NASA's Orbiting Carbon Observatory-2.› Full image and caption
Credit: NASA/JPL-Caltech

"Preliminary analysis shows these signals are largely driven by the seasonal burning of savannas and forests," said OCO-2 Deputy Project Scientist Annmarie Eldering, of JPL. The team is comparing these measurements with data from other satellites to clarify how much of the observed concentration is likely due to biomass burning.

The time period covered by the new maps is spring in the Southern Hemisphere, when agricultural fires and land clearing are widespread. The impact of these activities on global carbon dioxide has not been well quantified. As OCO-2 acquires more data, Eldering said, its Southern Hemisphere measurements could lead to an improved understanding of the relative importance in these regions of photosynthesis in tropical plants, which removes carbon dioxide from the atmosphere, and biomass burning, which releases carbon dioxide to the atmosphere.

The early OCO-2 data hint at some potential surprises to come. "The agreement between OCO-2 and models based on existing carbon dioxide data is remarkably good, but there are some interesting differences," said Christopher O'Dell, an assistant professor at CSU and member of OCO-2's science team. "Some of the differences may be due to systematic errors in our measurements, and we are currently in the process of nailing these down. But some of the differences are likely due to gaps in our current knowledge of carbon sources in certain regions -- gaps that OCO-2 will help fill in."

Carbon dioxide in the atmosphere has no distinguishing features to show what its source was. Elevated carbon dioxide over a region could have a natural cause -- for example, a drought that reduces plant growth -- or a human cause. At today's briefing, JPL scientist Christian Frankenberg introduced a map using a new type of data analysis from OCO-2 that can help scientists distinguish the gas's natural sources.

Through photosynthesis, plants remove carbon dioxide from the air and use sunlight to synthesize the carbon into food. Plants end up re-emitting about one percent of the sunlight at longer wavelengths. Using one of OCO-2's three spectrometer instruments, scientists can measure the re-emitted light, known as solar-induced chlorophyll fluorescence (SIF). This measurement complements OCO-2's carbon dioxide data with information on when and where plants are drawing carbon from the atmosphere.

"Where OCO-2 really excels is the sheer amount of data being collected within a day, about one million measurements across a narrow swath," Frankenberg said. "For fluorescence, this enables us, for the first time, to look at features on the five- to 10-kilometer scale on a daily basis." SIF can be measured even through moderately thick clouds, so it will be especially useful in understanding regions like the Amazon where cloud cover thwarts most spaceborne observations.

The changes in atmospheric carbon dioxide that OCO-2 seeks to measure are so small that the mission must take unusual precautions to ensure the instrument is free of errors. For that reason, the spacecraft was designed so that it can make an extra maneuver. In addition to gathering a straight line of data like a lawnmower swath, the instrument can point at a single target on the ground for a total of seven minutes as it passes overhead. That requires the spacecraft to turn sideways and make a half cartwheel to keep the target in its sights.

The targets OCO-2 uses are stations in the Total Carbon Column Observing Network (TCCON), a collaborative effort of multiple international institutions. TCCON has been collecting carbon dioxide data for about five years, and its measurements are fully calibrated and extremely accurate. At the same time that OCO-2 targets a TCCON site, a ground-based instrument at the site makes the same measurement. The extent to which the two measurements agree indicates how well calibrated the OCO-2 sensors are.

Additional maps released today showed the results of these targeting maneuvers over two TCCON sites in California and one in Australia. "Early results are very promising," said Paul Wennberg, a professor at Caltech and head of the TCCON network. "Over the next few months, the team will refine the OCO-2 data, and we anticipate that these comparisons will continue to improve."

To learn more about OCO-2, visit: