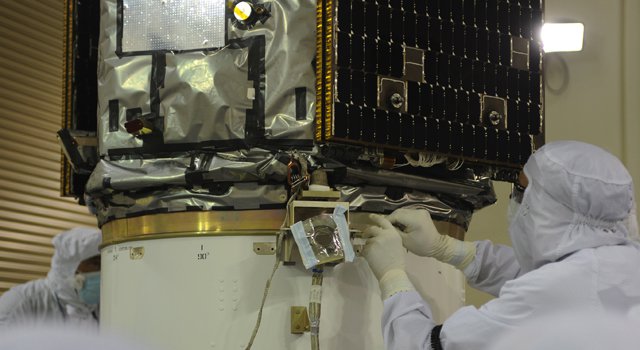 The launch of NASA's Orbiting Carbon Observatory-2 mission (OCO-2) at Vandenberg Air Force Base (VAFB) in California, is scheduled for Tuesday, July 1.

The launch of NASA's Orbiting Carbon Observatory-2 mission (OCO-2) at Vandenberg Air Force Base (VAFB) in California, is scheduled for Tuesday, July 1. Liftoff from Space Launch Complex 2 aboard a United Launch Alliance Delta II rocket at VAFB is targeted for 2:56 a.m. PDT (5:56 a.m. EDT) at the opening of a 30-second launch window.

The observatory will measure the global geographic distribution of these sources and sinks and study their changes over time.

The spacecraft's final circular polar orbit will be 438 miles (705 kilometers) at an inclination of 98.2 degrees.

The prelaunch news conference and mission science briefing will be held from 4 to 6 p.m. PDT (7 to 9 p.m. EDT) on Sunday, June 29 at Vandenberg Air Force Base. The briefing will be carried live on NASA Television and streamed on NASA.gov.

Note: NASA has added a media and social media event to the activities at the OCO-2 launch site for Monday, June 30. From 9:30 to 11 a.m. PDT (12:30 to 2 p.m. EDT), NASA will host a live broadcast featuring interactive discussions, including an OCO-2 mission overview, launch details and an engineering and science panel. The event will be aired live on NASA TV and streamed on NASA.gov.

After launch, an OCO-2 post-launch news conference will be held at Vandenberg. Observatory and mission officials will provide the spacecraft status and discuss its state of health. The event will begin at 5:30 a.m. PDT (8:30 a.m. EDT) and will be carried live on NASA Television and on NASA.gov.

The prelaunch news conference and other OCO-2 events also will be webcast at: http://www.nasa.gov/nasatv

For information on receiving NASA TV and for the schedule of covered events, go to: http://www.nasa.gov/multimedia/nasatv/index.html

Extensive prelaunch and launch day coverage of the liftoff of OCO-2 aboard the Delta II rocket will be available on NASA's home page at: http://www.nasa.gov

A prelaunch webcast for the OCO-2 mission will be streamed on NASA's website at noon PDT (3 p.m. EDT) on Monday, June 30. To view the webcast and the countdown blog or to learn more about the OCO-2 mission, visit: http://www.nasa.gov/oco2

Some of the events carried live on NASA TV and NASA.gov will also be streamed on: http://www.ustream.tv/NASAJPL2

Join the conversation and follow the OCO-2 mission online by using #OCO2 and #EarthRightNow on Twitter at: https://twitter.com/lamOCO2