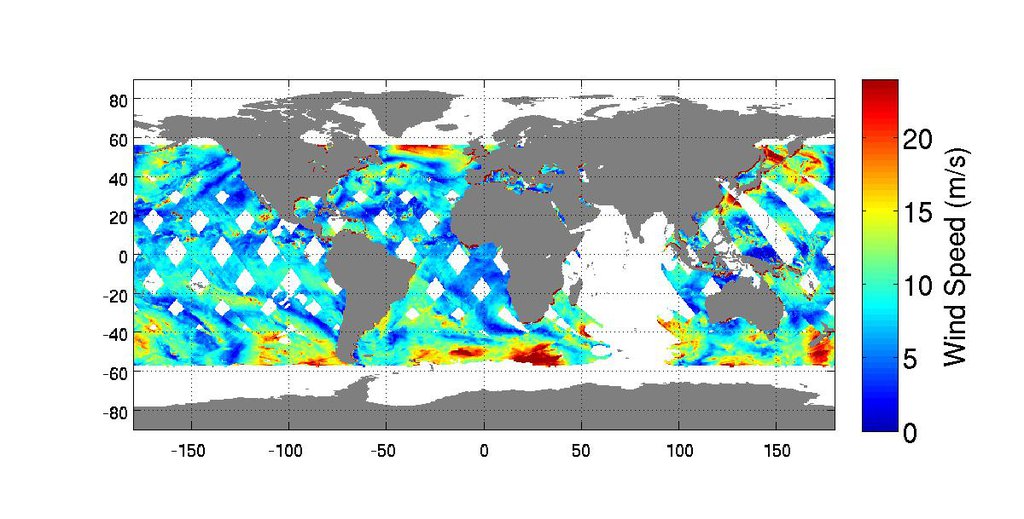 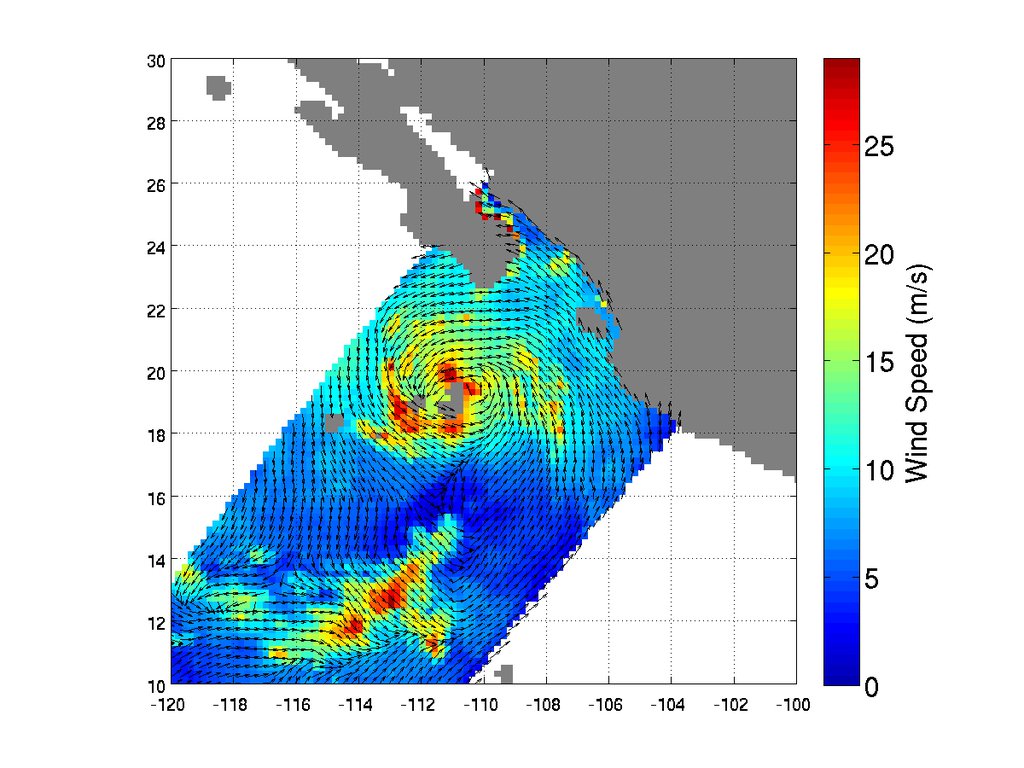 This image shows Tropical Storm Simon as seen by ISS-RapidScat as the storm approached Mexico's Baja California peninsula at 7:10 p.m. PDT on Oct. 3. Wind speeds are shown in color, with reds and yellows indicating the highest wind speeds. Wind directions are shown as arrows.
Credit: NASA-JPL/Caltech

NASA's newest Earth observing mission, the International Space Station-Rapid Scatterometer, or ISS-RapidScat, is collecting its first science data on ocean wind speeds and direction following its successful installation and activation on the exterior of the station's Columbus module.

Ground controllers at NASA's Johnson Space Center in Houston robotically assembled the RapidScat instrument and its nadir adapter, which orients the instrument to point at Earth, on Sept. 29 to 30. On Oct. 1, the instrument was powered on, its antenna began spinning and it started transmitting and receiving its first winds data. The team then began checking out the instrument, a process expected to take about two weeks. Checkout activities to date are proceeding nominally. Following instrument checkout, the team will perform two weeks of preliminary calibration and validation of science data. RapidScat will then be ready to begin its two-year science mission.

On Oct. 3, mission scientists processed their first winds data and produced their first uncalibrated images: a partial global map of wind speeds and a close-up image of what was then Tropical Storm Simon, brewing off the west coast of Mexico, showing its wind speeds and wind directions at approximately 7 p.m. local time. The new images are available at:

"Most satellite missions require weeks or even months to produce data of the quality that we seem to be getting from the first few days of RapidScat," said RapidScat Project Scientist Ernesto Rodriguez of NASA's Jet Propulsion Laboratory, Pasadena, California, which built and manages the mission. "We have been very lucky that within the first days of operations we have already been able to observe a developing tropical cyclone.

"The quality of these data reflect the level of testing and preparation that the team has put in prior to launch," Rodriguez said. "It also reflects the quality of the spare QuikScat hardware from which RapidScat was partially assembled."

RapidScat is the first science payload to be robotically assembled in space since the space station itself. Launched Sept. 21 from Florida's Cape Canaveral Air Force Station aboard a SpaceX Falcon 9 launch vehicle, RapidScat rode to orbit in the "trunk" of SpaceX's Dragon spacecraft. The Dragon reached the station on Sept. 23, was captured by the station's robotic arm and was then berthed at the station's Node 2 Nadir, or Earth-facing, port.

Following inspections of RapidScat from cameras installed in the Dragon's trunk and on the station's robotic arm, ground controllers at Johnson Space Center used the DEXTRE manipulator on the station's robotic arm to pluck RapidScat's nadir adapter from the Dragon trunk on Sept. 29. An intricate set of maneuvers by the robotic arm then followed, leading to the adapter's successful mechanical and electrical connection to the Columbus module's External Payload Facility SDX site five hours later. The robotic arm was then released from the adapter.

About 15 hours later, the RapidScat team was back at work again, using the robotic arm to remove the RapidScat instrument itself from the Dragon's trunk and install it onto the nadir adapter. The installation went so well that a process expected to take five hours was completed in just two hours and 20 minutes. Following this first payload-to-payload mate in the history of the space station program, RapidScat then began drawing its power from the space station for the first time. RapidScat is an autonomous payload that requires no interaction from space station astronauts.

RapidScat will boost global monitoring of ocean winds for improved weather and marine forecasting, including hurricane monitoring, as well as climate studies. From the unique vantage point of the space station, this space-based scatterometer instrument will use radar pulses reflected from the ocean's surface from different angles to calculate ocean surface wind speeds and directions.

The ISS-RapidScat instrument is a speedy and cost-effective replacement for NASA's former QuikScat Earth satellite, which monitored ocean winds to provide essential measurements used in weather predictions, including hurricane monitoring.

ISS-RapidScat is a partnership between JPL and the International Space Station Program Office at JSC, with support from the Earth Science Division of NASA's Science Mission Directorate, Washington. Other mission partners include the Kennedy Space Center, Florida; NASA's Marshall Space Flight Center, Huntsville, Alabama; the European Space Agency; and SpaceX.