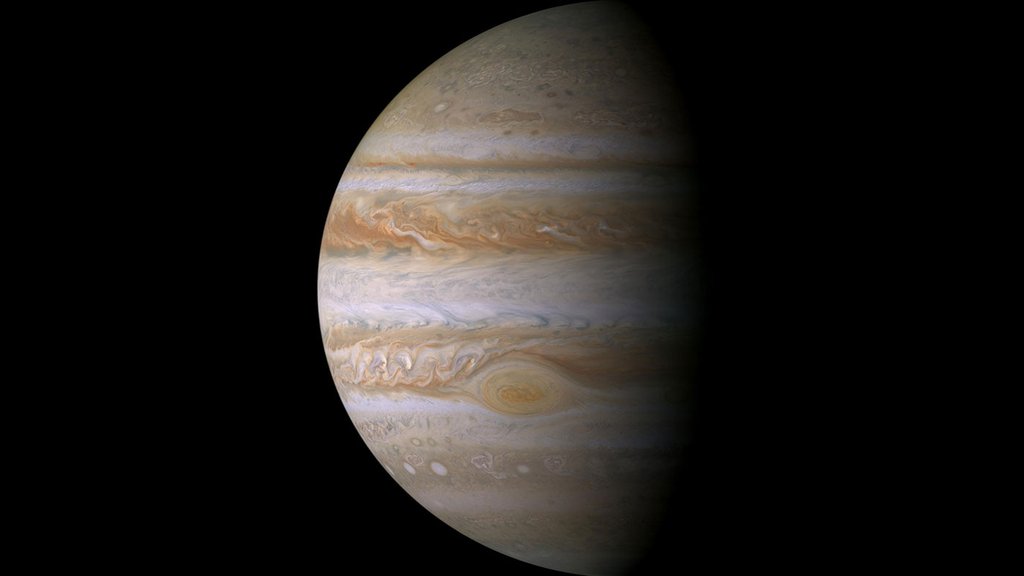 This true color mosaic of Jupiter was constructed from images taken by the narrow angle camera onboard NASA's Cassini spacecraft on December 29, 2000, during its closest approach to the giant planet at a distance of approximately 10 million kilometers (6.2 million miles).› Full image and caption
Credit: NASA/JPL/Space Science Institute

Just days after celebrating its first anniversary in Jupiter orbit, NASA's Juno spacecraft will fly directly over Jupiter's Great Red Spot, the gas giant's iconic, 10,000-mile-wide (16,000-kilometer-wide) storm. This will be humanity's first up-close and personal view of the gigantic feature -- a storm monitored since 1830 and possibly existing for more than 350 years.

"Jupiter's mysterious Great Red Spot is probably the best-known feature of Jupiter," said Scott Bolton, principal investigator of Juno from the Southwest Research Institute in San Antonio. "This monumental storm has raged on the solar system's biggest planet for centuries. Now, Juno and her cloud-penetrating science instruments will dive in to see how deep the roots of this storm go, and help us understand how this giant storm works and what makes it so special."

The data collection of the Great Red Spot is part of Juno's sixth science flyby over Jupiter's mysterious cloud tops. Perijove (the point at which an orbit comes closest to Jupiter's center) will be on Monday, July 10, at 6:55 p.m. PDT (9:55 p.m. EDT). At the time of perijove, Juno will be about 2,200 miles (3,500 kilometers) above the planet's cloud tops. Eleven minutes and 33 seconds later, Juno will have covered another 24,713 miles (39,771 kilometers) and will be directly above the coiling crimson cloud tops of Jupiter's Great Red Spot. The spacecraft will pass about 5,600 miles (9,000 kilometers) above the Giant Red Spot clouds. All eight of the spacecraft's instruments as well as its imager, JunoCam, will be on during the flyby.

On July 4 at 7:30 p.m. PDT (10:30 p.m. EDT), Juno will have logged exactly one year in Jupiter orbit. At the time, the spacecraft will have chalked up about 71 million miles (114.5 million kilometers) in orbit around the giant planet.

"The success of science collection at Jupiter is a testament to the dedication, creativity and technical abilities of the NASA-Juno team," said Rick Nybakken, project manager for Juno from NASA's Jet Propulsion Laboratory in Pasadena, California. "Each new orbit brings us closer to the heart of Jupiter's radiation belt, but so far the spacecraft has weathered the storm of electrons surrounding Jupiter better than we could have ever imagined."