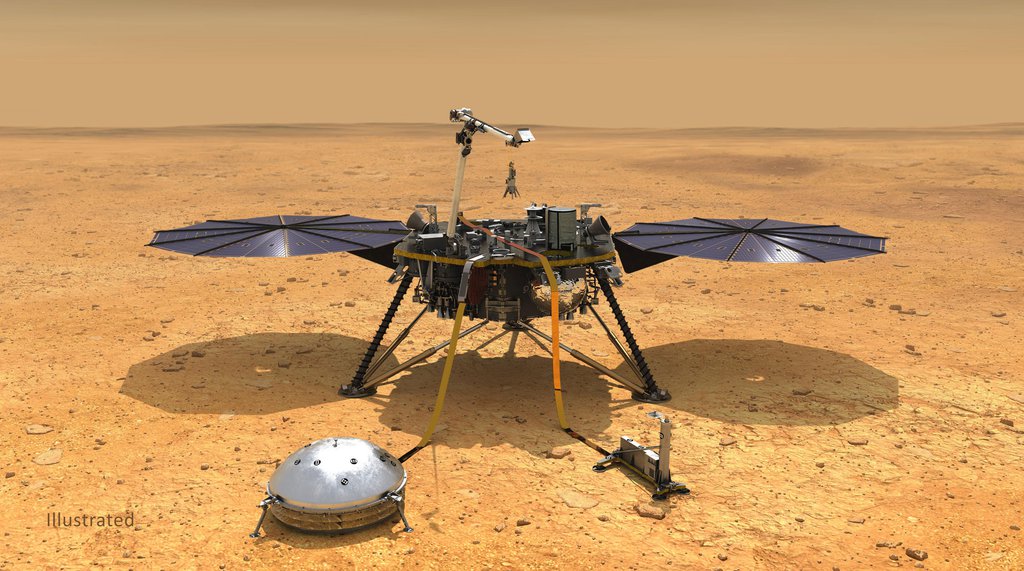 The lander's unique science can teach us how planets are born.

After touching down in November, NASA's InSight spacecraft will spread its solar panels, unfold a robotic arm ... and stay put. Unlike the space agency's rovers, InSight is a lander designed to study an entire planet from just one spot.

This sedentary science allows InSight to detect geophysical signals deep below the Martian surface, including marsquakes and heat. Scientists will also be able to track radio signals from the stationary spacecraft, which vary based on the wobble in Mars' rotation. Understanding this wobble could help solve the mystery of whether the planet's core is solid.

Here are five things to know about how InSight conducts its science.

1. InSight Can Measure Quakes Anywhere on the Planet

Quakes on Earth are usually detected using networks of seismometers. InSight has only one - called SEIS (Seismic Experiment for Interior Structure) - so its science team will use some creative measurements to analyze seismic waves as they occur anywhere on the planet.

SEIS will measure seismic waves from marsquakes and meteorite strikes as they move through Mars. The speed of those waves changes depending on the material they're traveling through, helping scientists deduce what the planet's interior is made of.

Seismic waves come in a surprising number of flavors. Some vibrate across a planet's surface, while others ricochet off its center. They also move at different speeds. Seismologists can use each type as a tool to triangulate where and when a seismic event has happened.

This means InSight could have landed anywhere on Mars and, without moving, gathered the same kind of science.

Seismometers are touchy by nature. They need to be isolated from "noise" in order to measure seismic waves accurately.

SEIS is sensitive enough to detect vibrations smaller than the width of a hydrogen atom. It will be the first seismometer ever set on the Martian surface, where it will be thousands of times more accurate than seismometers that sat atop the Viking landers.

To take advantage of this exquisite sensitivity, engineers have given SEIS a shell: a wind-and-thermal shield that InSight's arm will place over the seismometer. This protective dome presses down when wind blows over it; a Mylar-and-chainmail skirt keeps wind from blowing in. It also gives SEIS a cozy place to hide away from Mars' intense temperature swings, which can create minute changes in the instrument's springs and electronics.

3. InSight Has a Self-Hammering Nail

Have you ever tried to hammer a nail? Then you know holding it steady is key. InSight carries a nail that also needs to be held steady.

This unique instrument, called HP3 (Heat Flow and Physical Properties Package), holds a spike attached to a long tether. A mechanism inside the spike will hammer it up to 16 feet (5 meters) underground, dragging out the tether, which is embedded with heat sensors.

At that depth, it can detect heat trapped inside Mars since the planet first formed. That heat shaped the surface with volcanoes, mountain ranges and valleys. It may even have determined where rivers ran early in Mars' history.

4. InSight Can Land in a Safe Spot

Because InSight needs stillness - and because it can collect seismic and heat data from anywhere on the planet - the spacecraft is free to land in the safest location possible.

InSight's team selected a location on Mars' equator called Elysium Planitia - as flat and boring a spot as any on Mars. That makes landing just a bit easier, as there's less to crash into, fewer rocks to land on and lots of sunlight to power the spacecraft. The fact that InSight doesn't use much power and should have plenty of sunlight at Mars' equator means it can provide lots of data for scientists to study.

InSight has two X-band antennas on its deck that make up a third instrument, called RISE (Rotation and Interior Structure Experiment). Radio signals from RISE will be measured over months, maybe even years, to study the tiny "wobble" in the rotation of the planet. That wobble is a sign of whether Mars' core is liquid or solid - a trait that could also shed light on the planet's thin magnetic field.

Collecting detailed data on this wobble hasn't happened since Mars Pathfinder's three-month mission in 1997 (although the Opportunity rover made a few measurements in 2011 while it remained still, waiting out the winter). Every time a stationary spacecraft sends radio signals from Mars, it can help scientists improve their measurements.