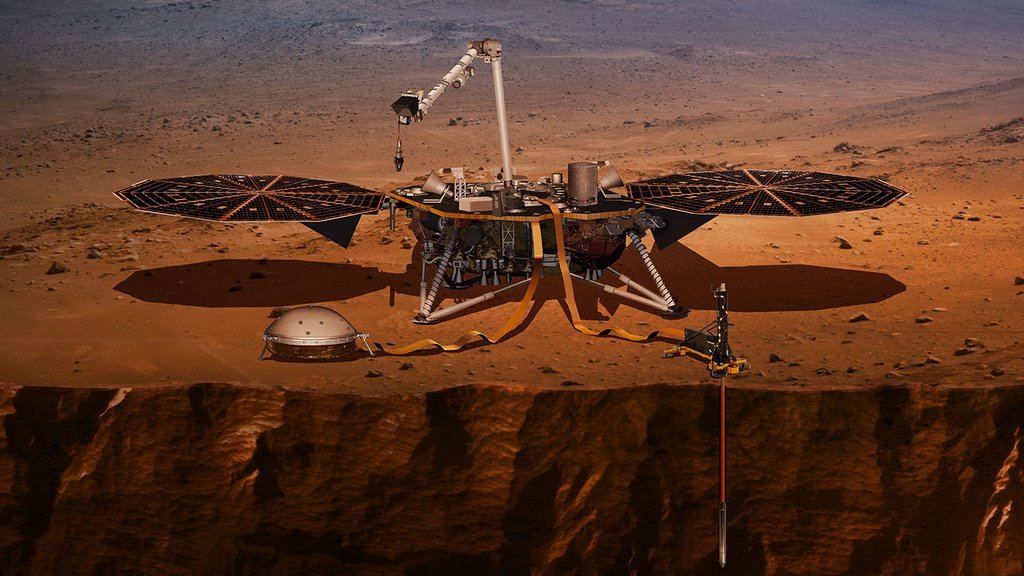 All systems are go for NASA's next launch to the Red Planet.

All systems are go for NASA's next launch to the Red Planet.

The early-morning liftoff on Saturday of the Mars InSight lander will mark the first time in history an interplanetary launch will originate from the West Coast. InSight will launch from the U.S. Air Force Vandenberg Air Force Base Space Launch Complex 3E. The two-hour launch window will open on May 5 at 4:05 a.m. PDT (7:05 a.m. EDT).

InSight, for Interior Exploration using Seismic Investigations, Geodesy and Heat Transport, will launch aboard aUnited Launch Alliance (ULA) Atlas V rocket. InSight will study the deep interior of Mars to learn how all rocky planets formed, including Earth and its Moon. The lander's instruments include a seismometer to detect marsquakes, and a probe that will monitor the flow of heat from the planet's interior.

The ULA rocket will carry the spacecraft over the Channel Islands just off the California Coast and continue climbing out over the Pacific, shadowing the coastline south beyond Baja California. InSight's Atlas will reach orbit about 13 minutes after launch, when the rocket is about 1,200 miles (1,900 kilometers) northwest of Isabella Island, Ecuador.

"For those Southern Californians who are interested in rockets or space exploration, or have insomnia, we hope to put on a great show this Saturday," said Tom Hoffman, InSight project manager from NASA's Jet Propulsion Laboratory in Pasadena, California. "But for those who want to sleep in on Saturday, there will be another opportunity to engage with this historic mission. We will be landing on Mars in the western Elysium Planitia region on Monday, Nov. 26, around noon Pacific time. You will be able to watch a live stream of this landing while working on your holiday shopping."

Getting a Mars mission flying requires a great many milestones. Among those still to come are the official start of the countdown to launch -- which comes on Friday, May 4 at 10:14 p.m. PDT (Saturday, May 5, 1:14 a.m. EDT). A little over an hour later, at about 11:30 p.m. PDT (May 5, 2:30 a.m. EDT), the 260-foot-tall (80-meter) Mobile Service Tower -- a structure that has been protecting the Atlas V launch vehicle and its InSight payload during their vertical assembly -- will begin a 20-minute long, 250-foot (about 80-meter) roll away from the Atlas. Four hours and 25 minutes later, the launch window will open.

"I've been to several rocket launches, but it is a whole different vibe when there is something you've been working on for years sitting in the nose cone waiting to get hurled beyond our atmosphere," said Bruce Banerdt, InSight principal investigator at JPL. "But as exciting as launch day will be, it's just a first step in a journey that should tell us not only why Mars formed the way it did, but how planets take shape in general."

InSight's launch period is May 5 through June 8, 2018, with multiple launch opportunities over windows of approximately two hours each date. Launch opportunities are set five minutes apart during each date's window.Whichever date the launch occurs, InSight's landing on Mars is planned for Nov. 26, 2018, around noon PST (3 p.m. EST).

Live televised coverage of the launch will be available at:

For information on viewing the launch in person, visit: