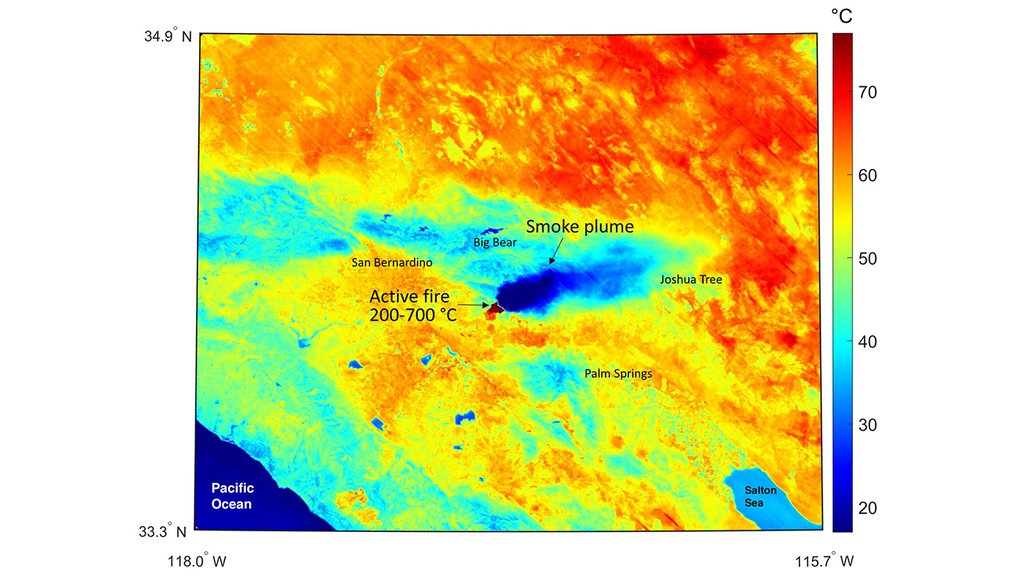 This ECOSTRESS temperature map shows the region surrounding the Apple fire that was raging in Southern California on Aug. 1, 2020.› Full image and caption
Credit: NASA/JPL-Caltech

As the wildfire rages in Southern California, an Earth-observing instrument aboard the International Space Station was able to measure its heat and dark smoke plume.

The wildfire began on the evening of Friday, July 31, after two smaller fires merged and rapidly grew in the hot conditions in Riverside County, east of Los Angeles, prompting the evacuation of thousands of residents. Air temperatures have soared past 100 degrees Fahrenheit (38 degrees Celsius), stressing the vegetation and turning the area into a tinderbox. By Monday, the wildfire had exploded to over 26,000 acres.

ECOSTRESS recorded the image above at 1:15 p.m. PST (4:15 p.m. EDT) on Saturday, Aug. 1, 2020, when the burn area was approximately 4,000 acres in size. In the image, the black smoke plume can be seen drifting east and over Joshua Tree National Park in the Mojave Desert. With a spatial resolution of about 77 by 77 yards (70 by 70 meters), the image enables researchers to study surface-temperature conditions down to the size of a football field. In the active burn area, temperatures of between 390 and 1290 degrees Fahrenheit (200 and 700 degrees Celsius) were recorded, and in one pixel in the ECOSTRESS image of the burn zone, a peak temperature of 1387 degrees Fahrenheit (753 degrees Celsius) was detected.

Tasked with detecting plant water use and stress, ECOSTRESS's primary mission is to measure the temperature of plants heating up as they run out of water. But it can also measure and track heat-related phenomena like fires, heat waves, and volcanoes. Due to the space station's unique orbit, the mission can acquire images of the same regions at different times of the day, as opposed to crossing over each area at the same time of day like satellites in other orbits do. This is advantageous when monitoring plant stress in the same area throughout the day, for example.