A self-portrait of NASA's Curiosity rover taken on Sol 2082 (June 15, 2018). A Martian dust storm has reduced sunlight and visibility at the rover's location in Gale Crater.

A new paper enriches scientists’ understanding of where the rock record preserved or destroyed evidence of Mars’ past and possible signs of ancient life.

Today, Mars is a planet of extremes – it’s bitterly cold, has high radiation, and is bone-dry. But billions of years ago, Mars was home to lake systems that could have sustained microbial life. As the planet’s climate changed, one such lake – in Mars’ Gale Crater – slowly dried out. Scientists have new evidence that supersalty water, or brines, seeped deep through the cracks, between grains of soil in the parched lake bottom and altered the clay mineral-rich layers beneath. 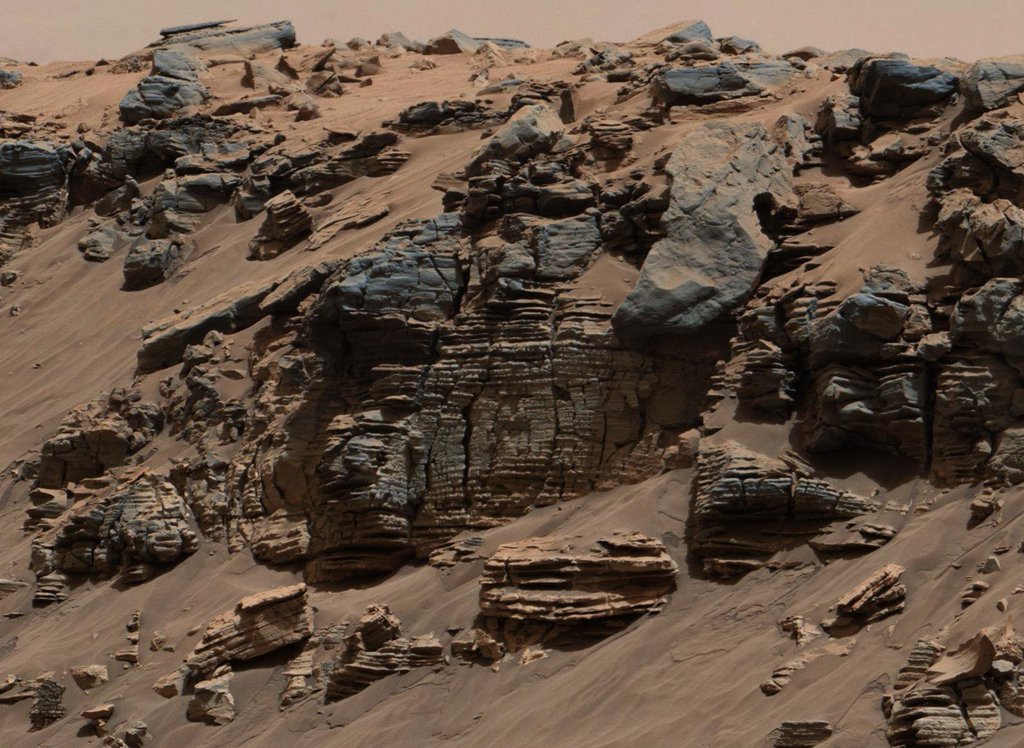 This evenly layered rock photographed by the Mast Camera (Mastcam) on NASA's Curiosity Mars Rover shows a pattern typical of a lake-floor sedimentary deposit not far from where flowing water entered a lake.

The findings published in the July 9 edition of the journal Science and led by the team in charge of the Chemistry and Mineralogy, or CheMin, instrument – aboard NASA’s Mars Science Laboratory Curiosity rover – help add to the understanding of where the rock record preserved or destroyed evidence of Mars’ past and possible signs of ancient life.

“We used to think that once these layers of clay minerals formed at the bottom of the lake in Gale Crater, they stayed that way, preserving the moment in time they formed for billions of years,” said Tom Bristow, CheMin principal investigator and lead author of the paper at NASA’s Ames Research Center in California’s Silicon Valley. “But later brines broke down these clay minerals in some places – essentially resetting the rock record.”

Mars: It Goes on Your Permanent Record

Mars has a treasure trove of incredibly ancient rocks and minerals compared with Earth. And with Gale Crater’s undisturbed layers of rocks, scientists knew it would be an excellent site to search for evidence of the planet’s history, and possibly life.

Using CheMin, scientists compared samples taken from two areas about a quarter-mile apart from a layer of mudstone deposited billions of years ago at the bottom of the lake at Gale Crater. Surprisingly, in one area, about half the clay minerals they expected to find were missing. Instead, they found mudstones rich with iron oxides – minerals that give Mars its characteristic rusty red color.

Scientists knew the mudstones sampled were about the same age and started out the same – loaded with clays – in both areas studied. So why then, as Curiosity explored the sedimentary clay deposits along Gale Crater, did patches of clay minerals – and the evidence they preserve – “disappear”?

Minerals are like a time capsule; they provide a record of what the environment was like at the time they formed. Clay minerals have water in their structure and are evidence that the soils and rocks that contain them came into contact with water at some point. 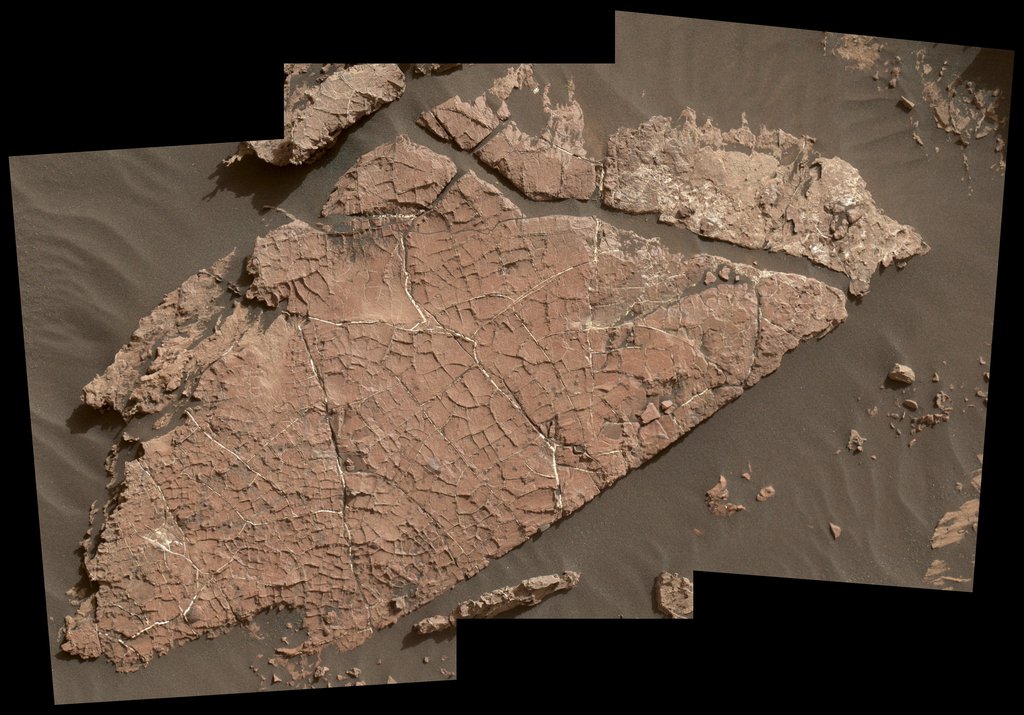 The network of cracks in this Martian rock slab called "Old Soaker" may have formed from the drying of a mud layer more than 3 billion years ago.

“Since the minerals we find on Mars also form in some locations on Earth, we can use what we know about how they form on Earth to tell us about how salty or acidic the waters on ancient Mars were,” said Liz Rampe, CheMin deputy principal investigator and co-author at NASA’s Johnson Space Center in Houston.

Previous work revealed that while Gale Crater’s lakes were present and even after they dried out, groundwater moved below the surface, dissolving and transporting chemicals. After they were deposited and buried, some mudstone pockets experienced different conditions and processes due to interactions with these waters that changed the mineralogy. This process, known as “diagenesis,” often complicates or erases the soil’s previous history and writes a new one.

Diagenesis creates an underground environment that can support microbial life. In fact, some very unique habitats on Earth – in which microbes thrive – are known as “deep biospheres.”

“These are excellent places to look for evidence of ancient life and gauge habitability,” said John Grotzinger, CheMin co-investigator and co-author at the California Institute of Technology, or Caltech, in Pasadena, California. “Even though diagenesis may erase the signs of life in the original lake, it creates the chemical gradients necessary to support subsurface life, so we are really excited to have discovered this.”

By comparing the details of minerals from both samples, the team concluded that briny water filtering down through overlying sediment layers was responsible for the changes. Unlike the relatively freshwater lake present when the mudstones formed, the salty water is suspected to have come from later lakes that existed within an overall drier environment. Scientists believe these results offer further evidence of the impacts of Mars’ climate change billions of years ago. They also provide more detailed information that is then used to guide the Curiosity rover’s investigations into the history of the Red Planet. This information also will be utilized by NASA’s Mars 2020 Perseverance rover team as they evaluate and select rock samples for eventual return to Earth.

“We’ve learned something very important: There are some parts of the Martian rock record that aren’t so good at preserving evidence of the planet’s past and possible life,” said Ashwin Vasavada, Curiosity project scientist and co-author at NASA’s Jet Propulsion Laboratory in Southern California. “The fortunate thing is we find both close together in Gale Crater, and can use mineralogy to tell which is which.”

Curiosity is in the initial phase of investigating the transition to a “sulfate-bearing unit,” or rocks thought to have formed while Mars’ climate dried out.

The mission is managed by JPL, a division of Caltech, for NASA’s Science Mission Directorate, Washington. Colleagues in NASA’s Astromaterials Research and Exploration Science Division at Johnson and NASA’s Goddard Space Flight Center in Greenbelt, Maryland, also are authors on the paper, as well as other institutions working on Curiosity.

The Mast Camera (Mastcam) on NASA's Curiosity Mars rover captured this mosaic as it explored the "clay-bearing unit" on Feb. 3, 2019 (Sol 2309). This landscape includes the rocky landmark nicknamed "Knockfarril Hill" (center right) and the edge of Vera Rubin Ridge, which runs along the top of the scene.