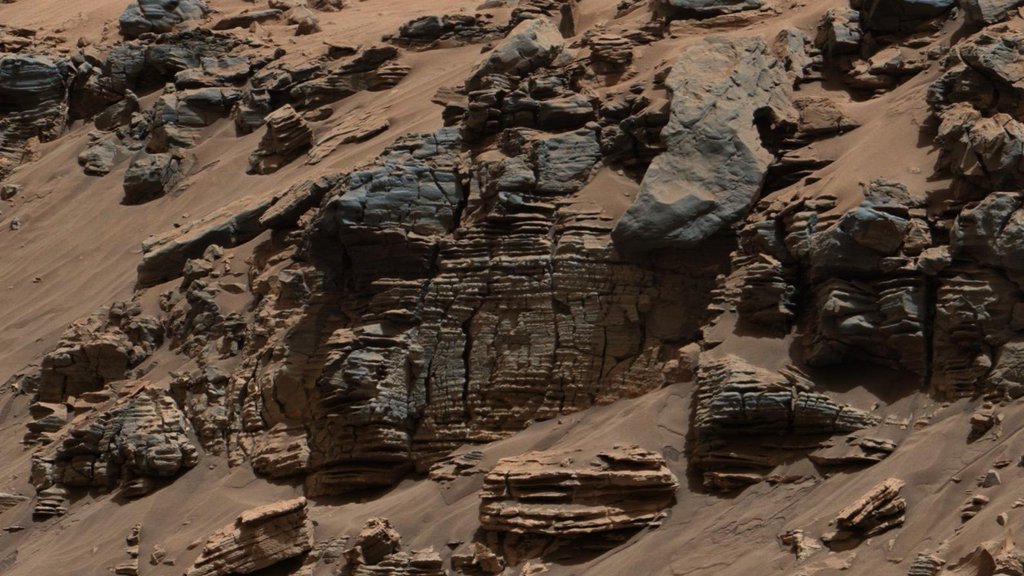 This evenly layered rock imaged in 2014 by the Mastcam on NASA's Curiosity Mars rover shows a pattern typical of a lake-floor sedimentary deposit near where flowing water entered a lake. Shallow and deep parts of an ancient Martian lake left different clues in mudstone formed from lakebed deposits.› Full image and caption
Credit: NASA/JPL-Caltech/MSSS 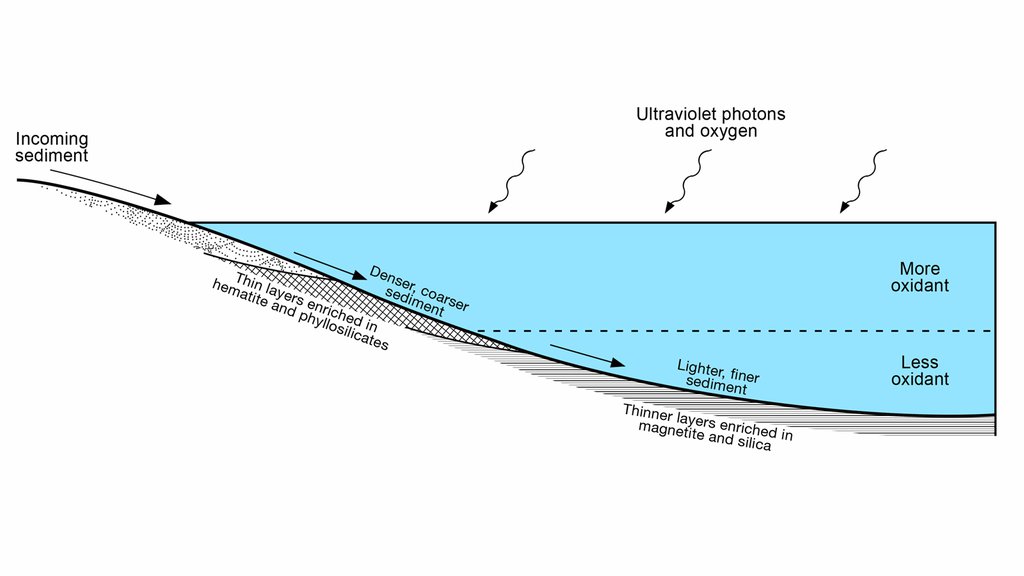 This diagram presents some of the processes and clues related to a long-ago lake on Mars that became stratified, with the shallow water richer in oxidants than deeper water was.› Full image and caption
Credit: NASA/JPL-Caltech/Stony Brook University

A long-lasting lake on ancient Mars provided stable environmental conditions that differed from one part of the lake to another, NASA's Curiosity rover mission has found.

› NASA's Curiosity Mars rover mission has provided an unprecedented level of detail about an ancient lake environment on Mars that offered favorable conditions for microbial life.

› A lake in Mars' Gale Crater long ago was stratified, with oxidant-rich shallows and oxidant-poor depths.

A long-lasting lake on ancient Mars provided stable environmental conditions that differed significantly from one part of the lake to another, according to a comprehensive look at findings from the first three-and-a-half years of NASA's Curiosity rover mission.

Previous work had revealed the presence of a lake more than three billion years ago in Mars' Gale Crater. This study defines the chemical conditions that existed in the lake and uses Curiosity's powerful payload to determine that the lake was stratified. Stratified bodies of water exhibit sharp chemical or physical differences between deep water and shallow water. In Gale's lake, the shallow water was richer in oxidants than deeper water was.

"These were very different, co-existing environments in the same lake," said Joel Hurowitz of Stony Brook University, Stony Brook, New York, lead author of a report of the findings in the June 2 edition of the journal Science. "This type of oxidant stratification is a common feature of lakes on Earth, and now we've found it on Mars. The diversity of environments in this Martian lake would have provided multiple opportunities for different types of microbes to survive, including those that thrive in oxidant-rich conditions, those that thrive in oxidant-poor conditions, and those that inhabit the interface between those settings."

Whether Mars has ever hosted any life is still unknown, but seeking signs of life on any planet -- whether Earth, Mars or more-distant icy worlds -- begins with reconstruction of the environment to determine if it was capable of supporting life.

Curiosity's primary goal when it landed inside Gale Crater in 2012 was to determine whether Mars has ever offered environmental conditions favorable for microbial life. In its first year, on the crater floor at "Yellowknife Bay," the rover found evidence of ancient freshwater river and lake environments with all the main chemical ingredients for life and a possible energy source for life. Curiosity has since driven to the base of Mount Sharp, a layered mountain inside the crater, and inspected rock layers that grow progressively younger as the rover gains elevation on lower Mount Sharp.

Differences in the physical, chemical and mineral characteristics of several sites on lower Mount Sharp at first presented a puzzle to the rover team. For example, some rocks showed thicker layering with a larger proportion of an iron mineral called hematite, while other rocks showed very fine layers and more of an iron mineral called magnetite. Comparing these properties suggested very distinctive environments of deposition.

Researchers considered whether these differences could have resulted from environmental conditions fluctuating over time or differing from place to place.

"We could tell something was going on," Hurowitz said. "What was causing iron minerals to be one flavor in one part of the lake and another flavor in another part of the lake? We had an 'Aha!' moment when we realized that the mineral information and the bedding-thickness information mapped perfectly onto each other in a way you would expect from a stratified lake with a chemical boundary between shallow water and deeper water."

In addition to revealing new information about chemical conditions within the lake, the report by Hurowitz and 22 co-authors also documents fluctuations in the climate of ancient Mars. One such change happened between the time crater-floor rocks were deposited and the time the rocks that now make up the base of Mount Sharp were deposited. Those later rocks are exposed at "Pahrump Hills" and elsewhere.

The method the team used for detecting changes in ancient climate conditions on Mars resembles how ice cores are used to study past temperature conditions on Earth. It is based on comparing differences in the chemical composition of layers of mud-rich sedimentary rock that were deposited in quiet waters in the lake. While the lake was present in Gale, climate conditions changed from colder and drier to warmer and wetter. Such short-term fluctuations in climate took place within a longer-term climate evolution from the ancient warmer and wetter conditions that supported lakes, to today's arid Mars.

"These results give us unprecedented detail in answering questions about ancient environmental conditions on Mars," said Curiosity Project Scientist Ashwin Vasavada of NASA's Jet Propulsion Laboratory, Pasadena, California. "I'm struck by how these fascinating conclusions on habitability and climate took everything the mission had to offer: a set of sophisticated science instruments, multiple years and miles of exploration, a landing site that retained a record of the ancient environment, and a lot of hard work by the mission team."

In mid-2017, Curiosity is continuing to reach higher and younger layers of Mount Sharp to study how the ancient lake environment evolved to a drier environment more like modern Mars. The mission is managed by JPL, a division of Caltech in Pasadena, for NASA's Science Mission Directorate, Washington. Curiosity and other Mars science missions are all part of ambitious robotic exploration to understand Mars, which helps lead the way for sending humans to Mars in the 2030s. For more about Curiosity, visit: