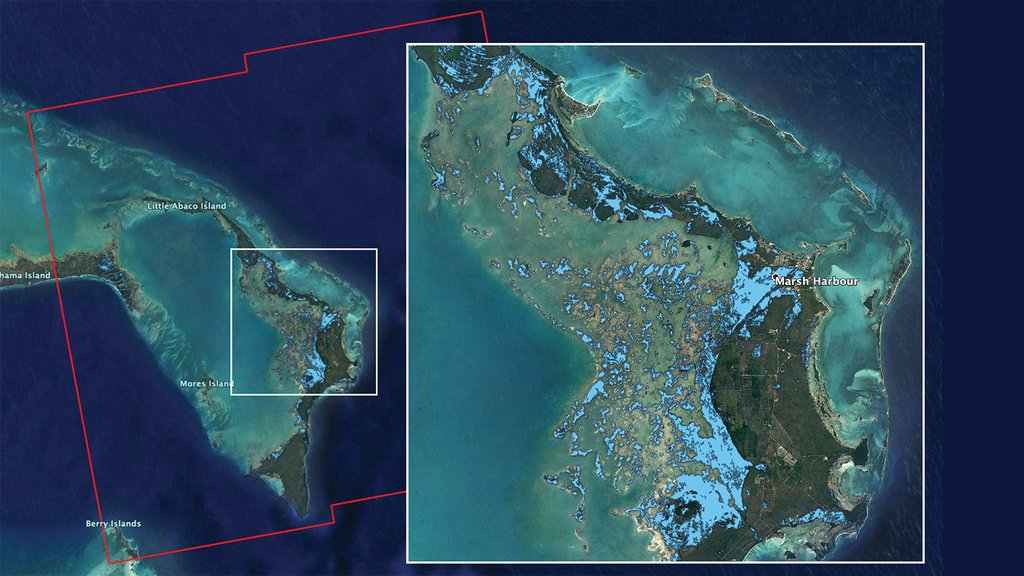 NASA's ARIA team used satellite data acquired on Sept. 2, 2019 to map flooding on the Abaco Islands in the Bahamas.

While many NASA missions are tracking Hurricane Dorian as the storm makes its way toward the United States, some researchers are looking at what Dorian has already left behind.

The Advanced Rapid Imaging and Analysis (ARIA) team at NASA's Jet Propulsion Laboratory in Pasadena, California, in collaboration with the Earth Observatory of Singapore (EOS), used synthetic aperture radar data from the European Union's Copernicus Sentinel-1 satellites to produce this flood map of the Bahamas. The light blue color indicates areas that were likely flooded when the data were acquired on Sept. 2, 2019. In particular, the map shows flooding in and around Marsh Harbour in the Abaco Islands.

The map covers an area of about 109 miles by 106 miles (176 kilometers by 170 kilometers) shown by the large red polygon. Each pixel measures about 32 yards (30 meters) across. Authorities and responders can use flood maps like this one as guidance to identify areas that are likely experiencing flooding; the map may be less reliable over urban or vegetated areas.

NASA works to leverage the power of our views of Earth from space and research aircraft to assist communities around the world as they plan for - and recover from - a wide range of disasters, from earthquakes to wildfires and severe weather events like hurricanes. NASA's Disasters Program, part of the Earth Science Division in the Science Mission Directorate, draws together expertise from across the agency when disaster strikes to provide information products for emergency responders.

More information on NASA's Disasters program can be found here: