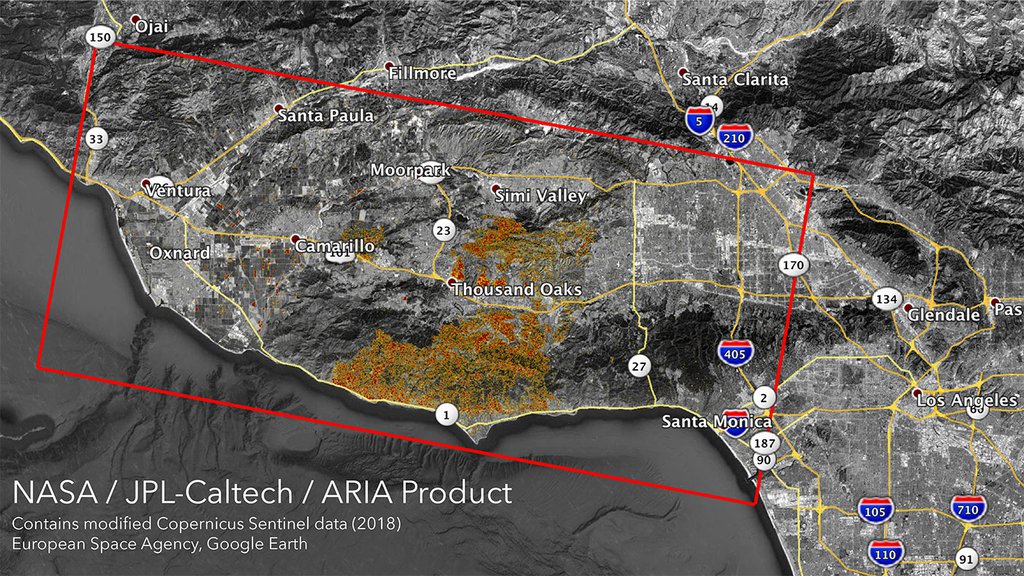 NASA instrument observes California's wildfires - and the damage they're leaving behind - from space.

California continues to be plagued by wildfires - including the Woolsey Fire near Los Angeles and the Camp Fire in Northern California, now one of the deadliest in the state's history. NASA satellites are observing these fires - and the damage they're leaving behind - from space.

The Advanced Rapid Imaging and Analysis (ARIA) team at NASA's Jet Propulsion Laboratory in Pasadena, California, produced new damage maps using synthetic aperture radar images from the Copernicus Sentinel-1 satellites. The first map shows areas likely damaged by the Woolsey Fire as of Sunday, Nov. 11. It covers an area of about 50 miles by 25 miles (80 km by 40 km) - framed by the red polygon. The color variation from yellow to red indicates increasing ground surface change, or damage.

The second map (above) shows damage from the Camp Fire in Northern California as of Saturday, Nov. 10. It depicts an area of about 55 miles by 48 miles (88 km by 77 km) and includes the city of Paradise, one of the most devastated areas. Like the previous map, red areas show the most severe surface change, or damage. The ARIA team compared the data for both images to the Google Crisismap for preliminary validation.

Although the maps may be less reliable over vegetated terrain, like farmland, they can help officials and first responders identify heavily damaged areas and allocate resources as needed.