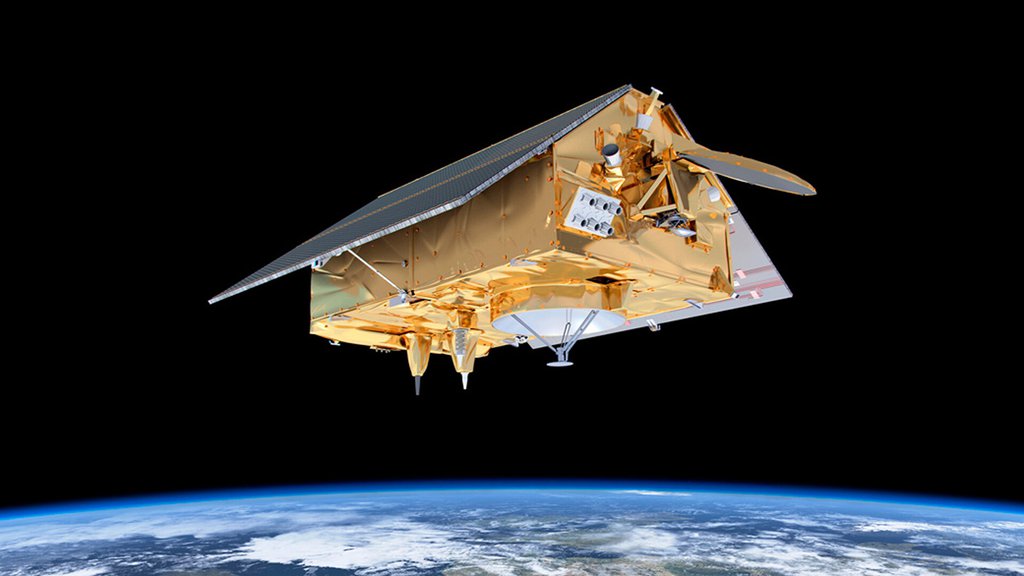 In this illustration, the Sentinel-6 Michael Freilich spacecraft - the world's latest sea-level satellite - is in space with its deployable solar panels extended.
Credit: NASA/JPL-Caltech

The U.S.-European collaboration aims to measure sea level and will launch from the California coast in late November.

NASA is targeting 12:17 p.m. EST (9:17 a.m. PST) Saturday, Nov. 21, for the launch of the Sentinel-6 Michael Freilich satellite, the first of two identical satellites to head into Earth orbit five years apart to continue sea level observations for at least the next decade.

Live launch coverage will begin at 11:45 a.m. EST (8:45 a.m. PST), on NASA Television and the agency's website, with prelaunch and science briefings the day before on Nov. 20.

Sentinel-6 Michael Freilich will head into orbit on a SpaceX Falcon 9 rocket from Space Launch Complex 4 at Vandenberg Air Force Base (VAFB) in California. The launch is managed by NASA's Launch Services Program, based at the agency's Kennedy Space Center in Florida. NASA's Jet Propulsion Laboratory in Southern California manages the agency's contribution to the mission.

The Sentinel-6 Michael Freilich satellite is named in honor of the former director of NASA's Earth Science Division, who was instrumental in advancing space-based ocean measurements. It follows the most recent U.S.-European sea level observation satellite, Jason-3, which launched in 2016 and is currently providing high-precision and timely observations of the topography of the global ocean.

The Sentinel-6/Jason-CS (Continuity of Service) mission, consisting of the Sentinel-6 Michael Freilich and Sentinel-6B satellites, is being jointly developed by ESA (European Space Agency), the European Organisation for the Exploitation of Meteorological Satellites (EUMETSAT), NASA, and the National Oceanic and Atmospheric Administration (NOAA), with funding support from the European Commission and support from France's National Centre for Space Studies (CNES).

The Sentinel-6/Jason-CS mission is part of Copernicus, the European Union's Earth observation program, managed by the European Commission. Continuing the legacy of the Jason series missions, Sentinel-6/Jason-CS will extend the records of sea level into their fourth decade, collecting accurate measurements of sea surface height for more than 90% of the world's oceans, and providing crucial information for operational oceanography, marine meteorology, and climate studies. Sentinel-6 Michael Freilich's twin, Sentinel-6B, is scheduled to launch in 2025.

NASA's contributions to the Sentinel-6/Jason-CS mission are three science instruments for each of the two satellites: the Advanced Microwave Radiometer, the Global Navigation Satellite System - Radio Occultation, and the Laser Retroreflector Array. NASA is also contributing launch services, ground systems supporting operation of the NASA science instruments, the science data processors for two of these instruments, and support for the U.S. members of the international Ocean Surface Topography Science Team.

Full mission coverage is as follows (all times Eastern):

This will air on NASA TV, as well as on the NASA Edge Facebook page and YouTube channel.

As we finalize launch preparations, we are excited to invite the public to join our virtual NASA Social (https://fb.me/e/1bC2vFNls). Stay up to date on the latest mission activities; interact with NASA, NOAA, ESA, and EUMETSAT team members in real time; and watch the launch of the SpaceX Falcon 9 rocket that will boost Sentinel-6 Michael Freilich into orbit for its journey #SeeingTheSeas

Print, fold, and get ready to fill your virtual launch passport. Stamps will be emailed following launches to all registrants (who submit an email registration via Eventbrite). Passports available now:

Stay connected with the mission on social media, and let people know you're following it on Twitter, Facebook, and Instagram using the hashtag #SeeingTheSeas and tag these accounts: