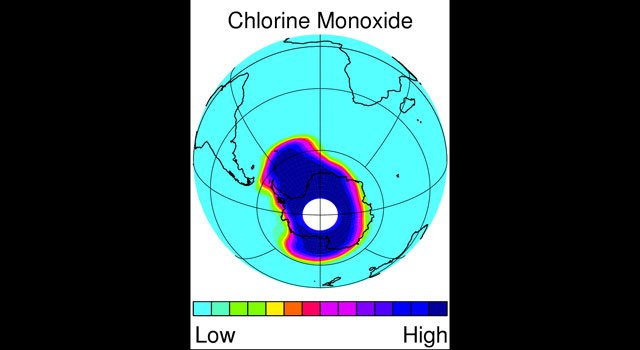 Map of chlorine monoxide, the primary agent of ozone destruction in the Antarctic 'ozone hole,' as measured by the Microwave Limb Sounder instrument on NASA's Aura satellite at an altitude of approximately 18 kilometers (11.2 miles) within the ozone layer.
Credit: NASA/JPL

A new NASA study of Earth's polar ozone layer reinforces scientists' understanding of how human-produced chlorine chemicals involved in the destruction of ozone interact with each other.

PASADENA, Calif. – A new NASA study of Earth's polar ozone layer reinforces scientists' understanding of how human-produced chlorine chemicals involved in the destruction of ozone interact with each other.

A team of scientists led by Michelle Santee of NASA's Jet Propulsion Laboratory, Pasadena, Calif., examined how nighttime temperatures affect chlorine monoxide, a key chemical involved in ozone destruction. Combining NASA satellite measurements with a state-of-the-art chemical model, they found this relationship to be more consistent with recent laboratory work than with some older laboratory and field observational data. This verification is important, because scientists have not been able to conduct appropriate laboratory experiments relevant to understanding how polar chlorine monoxide behaves at night at the lowest temperatures of the stratosphere, Earth's second lowest atmospheric layer.

Santee and her team published their findings this month in the Proceedings of the National Academy of Sciences. The data came from the Microwave Limb Sounder instrument on NASA's Aura satellite.

"Our comprehensive study uses multiple years of Arctic and Antarctic satellite observations to quantify the nighttime balance of ozone-destroying chlorine chemical compounds," said Santee. "By gaining a better knowledge of this balance, scientists will be able to make more accurate predictions of polar ozone loss, especially in twilight and in the Arctic, where conditions are often only marginally favorable for ozone destruction."

At night, chlorine monoxide molecules combine to form chlorine peroxide, and the balance between these two chemicals is highly temperature-sensitive. Studying this balance quantitatively is challenging. Previous studies in the laboratory and using aircraft and satellites had found significantly different degrees of balance. The Microwave Limb Sounder's very large number of measurements has quantified this balance far better than before.

The new research contributes to scientific understanding of the phenomenon more commonly known as the "ozone hole." Each year in late winter and early spring in the southern hemisphere, chlorine and bromine from human-produced compounds cause the nearly total destruction of ozone in Earth's stratosphere in a layer about 20 kilometers (12 miles) above Antarctica. These source gases that are responsible for the greatest destruction of the ozone layer are now declining in response to the 1985 Montreal Protocol and its amendments.

Since its launch in 2004, the Microwave Limb Sounder has monitored most of the polar regions of both hemispheres daily, compiling tens of thousands of measurements of nighttime chlorine monoxide levels, along with various other chemicals, including ozone. These data are allowing scientists to test their understanding of chlorine-related chemistry on an unprecedented scale.

For more information on the Microwave Limb Sounder, see http://mls.jpl.nasa.gov/ .