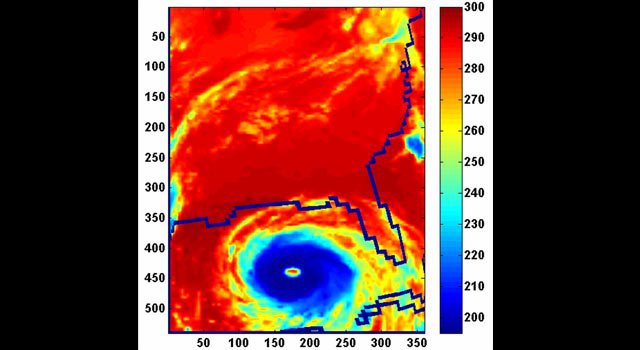 Extremely high clouds, known as deep convective clouds, are typically associated with severe storms and rainfall. In this AIRS image of Hurricane Katrina, taken August 28, 2005, the day before Katrina made landfall in Louisiana, the eye of the storm was surrounded by a "super cluster" of 528 deep convective clouds (depicted in dark blue). The temperatures of the tops of such clouds are colder than 210 degrees Kelvin (-82 degrees Fahrenheit).
Credit: NASA/JPL

The frequency of extremely high clouds in Earth's tropics -- the type associated with severe storms and rainfall -- is increasing as a result of global warming, according to a study by scientists at NASA's Jet Propulsion Laboratory, Pasadena, Calif.

PASADENA, Calif. -- The frequency of extremely high clouds in Earth's tropics -- the type associated with severe storms and rainfall -- is increasing as a result of global warming, according to a study by scientists at NASA's Jet Propulsion Laboratory, Pasadena, Calif.

In a presentation today to the fall meeting of the American Geophysical Union in San Francisco, JPL Senior Research Scientist Hartmut Aumann outlined the results of a study based on five years of data from the Atmospheric Infrared Sounder (AIRS) instrument on NASA's Aqua spacecraft. The AIRS data were used to observe certain types of tropical clouds linked with severe storms, torrential rain and hail. The instrument typically detects about 6,000 of these clouds each day. Aumann and his team found a strong correlation between the frequency of these clouds and seasonal variations in the average sea surface temperature of the tropical oceans.

For every degree Centigrade (1.8 degrees Fahrenheit) increase in average ocean surface temperature, the team observed a 45-percent increase in the frequency of the very high clouds. At the present rate of global warming of 0.13 degrees Celsius (0.23 degrees Fahrenheit) per decade, the team inferred the frequency of these storms can be expected to increase by six percent per decade.

Climate modelers have long speculated that the frequency and intensity of severe storms may or may not increase with global warming. Aumann said results of the study will help improve their models.

"Clouds and rain have been the weakest link in climate prediction," said Aumann. "The interaction between the daytime warming of the sea surface under clear-sky conditions and increases in the formation of low clouds, high clouds and, ultimately, rain is very complicated. The high clouds in our observations—typically at altitudes of 20 kilometers (12 miles) and higher—present the greatest difficulties for current climate models, which aren't able to resolve cloud structures smaller than about 250 kilometers (155 miles) in size."

Aumann said the results of his study, published recently in Geophysical Research Letters, are consistent with another NASA-funded study by Frank Wentz and colleagues in 2005. That study found an increase in the global rain rate of 1.5 percent per decade over 18 years, a value that is about five times higher than the value estimated by climate models that were used in the 2007 report of the Intergovernmental Panel on Climate Change.

JPL is managed for NASA by the California Institute of Technology in Pasadena.
Mission site