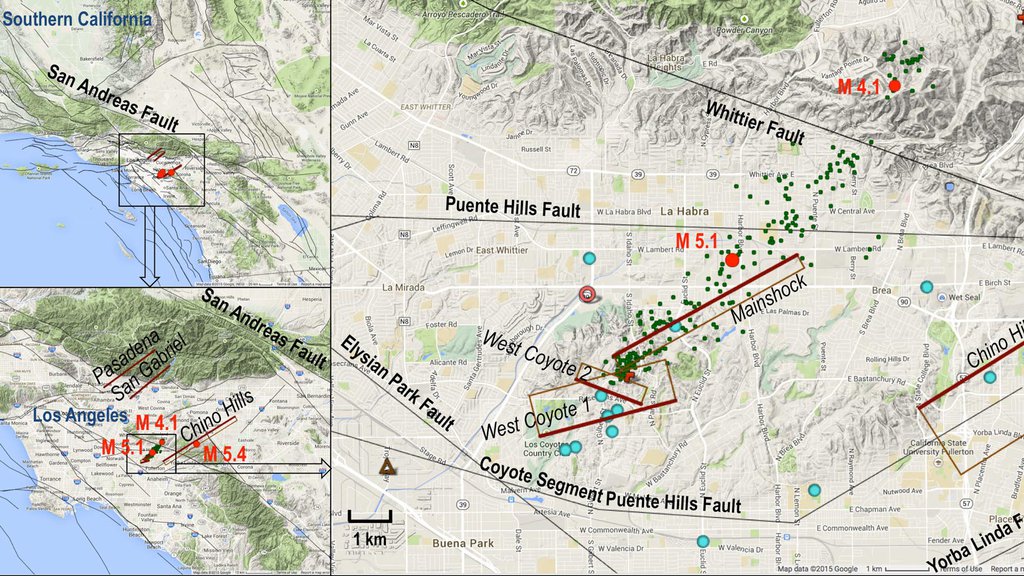 Setting of the La Habra quake. Red dots show the magnitude 5.1 main shock, magnitude 4.1 aftershock and magnitude 5.4 Chino quake in 2008. Relocated aftershocks are green dots. Modeled faults are in brown, with the heavier reddish brown line denoting the bottom of the fault and labeled with italics.
Credit: NASA/JPL-Caltech 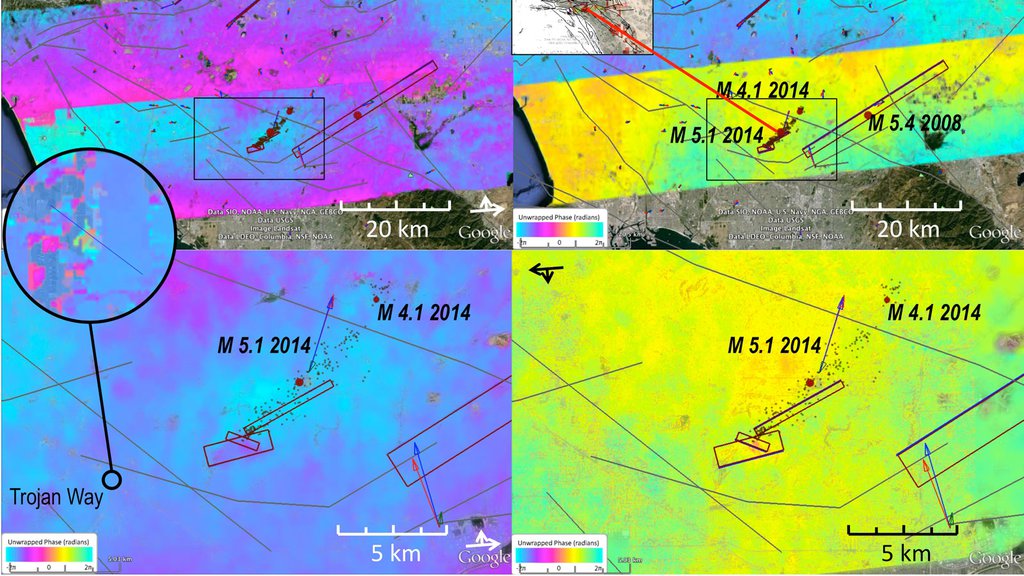 A new NASA-led analysis of a moderate earthquake that shook Greater Los Angeles in 2014 offers new insights into the potential for future earthquakes in the region.

A new NASA-led analysis of a moderate magnitude 5.1 earthquake that shook Greater Los Angeles in 2014 finds that the earthquake deformed Earth's crust across a broad region encompassing the northern Los Angeles Basin and northern Orange County. The shallow ground movements observed from this earthquake likely reflect strain accumulated on deeper faults, which remain locked and may be capable of producing future earthquakes.

A team of NASA and university researchers led by geophysicist Andrea Donnellan of NASA's Jet Propulsion Laboratory, Pasadena, California, used GPS and NASA airborne radar data to measure surface deformation in Earth's crust caused by the March 28, 2014, earthquake, which was centered in La Habra, California. The earthquake was felt widely in Orange, Los Angeles, Ventura, Riverside, San Bernardino, Kern and San Diego counties. While the earthquake was relatively moderate in size, the earthquake's depth (3.6 miles, or 5.85 kilometers) and location within a highly populated region resulted in more than $12 million in damage. Most of the damage occurred within a 3.7-mile (6-kilometer) radius of the epicenter, with a substantial amount of damage south of the main rupture.

Donnellan's team found the earthquake deformed Earth's crust across a broad region, but mostly south of the main rupture, consistent with the observed damage. They measured 3.1 inches (80 millimeters) of northward horizontal motion and about 0.2 to 0.4 inches (5 to 10 millimeters) of upward motion.

They also discovered that the total amount of surface deformation associated with the La Habra earthquake was larger than what would be expected from the magnitude 5.1 main shock. Eighty-two percent of the surface motion was attributed to the earthquake itself, with the remaining 18 percent occurring aseismically, without producing any ground shaking. The amount of aseismic motion was greater than expected. The team's results show that even moderate earthquakes near Los Angeles can produce ground deformation and damage to water mains away from their epicenters.

The team used computer models to explain the observed patterns of ground deformation and found that the best explanation for the observed ground deformation was shallow movement along several active buried fault-like zones in the West Coyote Hills in northern Orange County; in the Chino Hills on the border of Orange, Los Angeles and San Bernardino Counties; and in the San Gabriel Valley. The modeled movements identified by the team in the San Gabriel Valley and Chino Hills are part of a series of incompletely mapped active faults in a geologically complex region. It is likely the deeper portions of these faults remain locked and thus are capable of producing future earthquakes.

"The earthquake faults in this region are part of a system of faults," said Donnellan. "They can move together in an earthquake and produce measurable surface deformation, even during moderate magnitude earthquakes. This fault system accommodates the ongoing shortening of Earth's crust in the northern Los Angeles region." Tectonic motion across the Los Angeles region is distributed on an intricate network of horizontally and vertically moving faults that eventually release accumulated strain in the form of earthquakes, such as the destructive 1994 magnitude-6.7 Northridge earthquake.

Co-author Lisa Grant Ludwig of the University of California, Irvine, said the team's analysis can be used by policymakers and government agencies to improve assessments of earthquake risk in the Los Angeles area that are critical for disaster planning.

"The study builds upon more than two decades of NASA-led research to develop new methods to better measure and monitor movements of the solid Earth using satellite and airborne data and advanced computer modeling," Donnellan said. "It also provides a means of using these technologies to identify which faults moved during earthquakes, to measure exactly how much Earth's surface deformed during earthquakes, and to use these measurements to estimate future earthquake potential."

Study results are published in the journal Earth and Space Science. Other participating institutions include Indiana University, Bloomington; University of California, Davis; and University of Nevada, Reno.