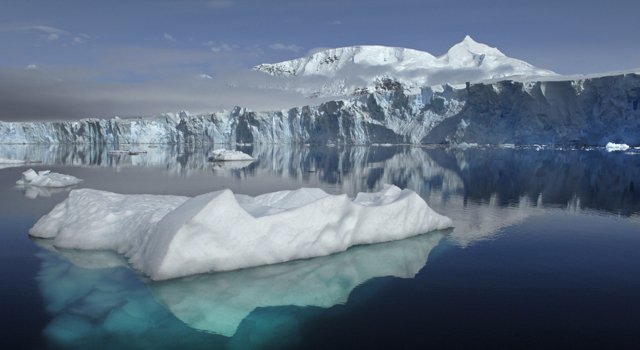 View of Sheldon Glacier with Mount Barre in the background, seen from Ryder Bay near Rothera Research Station, Adelaide Island, Antarctica. A new NASA/British Antarctic Survey study examines why Antarctic sea ice cover has increased under the effects of climate change over the past two decades.› Full image and caption 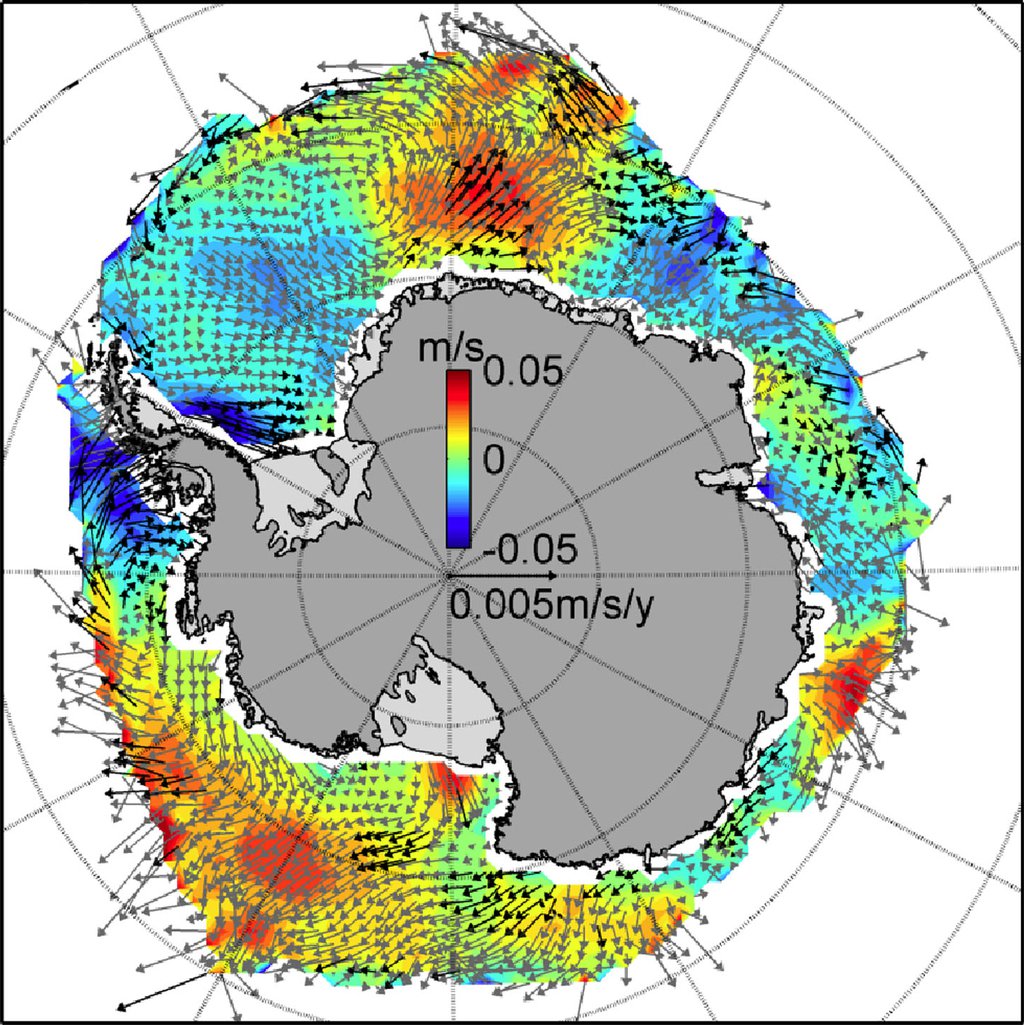 Trends in Antarctic sea ice motion over the 19-year study period are shown by the arrows, in meters per second per year. The background colors show the change in northward ice speed, with reds being fastest and blues slowest. The image highlights the tremendous variability in wind-driven ice drift around the Antarctic continent.
Credit: NASA/JPL-Caltech/British Antarctic Survey

"Until now, these changes in ice drift were only speculated upon, using computer models of Antarctic winds," said Holland, lead author of the study published this week in the journal Nature Geosciences. "This study of direct satellite observations shows the complexity of climate change. The total Antarctic sea ice cover is increasing slowly, but individual regions are actually experiencing much larger gains and losses that are almost offsetting each other overall.

"We now know that these regional changes are caused by changes in the winds, which, in turn, affect the ice cover through changes in both ice drift and air temperature," he continued. "The changes in ice drift also suggest large changes in the ocean surrounding Antarctica, which is very sensitive to the cold and salty water produced by sea ice growth."

Holland said sea ice around Antarctica is constantly being blown away from the continent by strong northward winds. "Since 1992, this ice drift has changed," he said. "In some areas, the export of ice away from Antarctica has doubled, while in others it has decreased significantly."

Sea ice plays a key role in Earth's environment, reflecting heat from the sun and providing a habitat for marine life. At both poles, sea ice cover is at its minimum during late summer. However, during the winter freeze in Antarctica, this ice cover expands to an area roughly twice the size of Europe. Ranging in thickness from less than three feet (a meter) to several meters, the ice insulates the warm ocean from the frigid atmosphere above.

This new research also helps explain why observed changes in the amount of sea ice cover are so different in the two polar regions. The Arctic has experienced dramatic ice losses in recent decades, while the overall ice extent in the Antarctic has increased slightly. However, this small Antarctic increase is actually the result of much larger regional increases and decreases, which are now shown to be caused by wind-driven changes. In places, increased northward winds have caused the sea ice cover to expand outwards from Antarctica. In contrast, the Arctic Ocean is surrounded by land, so changed winds cannot cause Arctic ice to expand in the same way.

"The Antarctic sea ice cover interacts with the global climate system very differently than that of the Arctic, and these results highlight the sensitivity of the Antarctic ice coverage to changes in the strength of the winds around the continent," said Kwok.

Climate change has had contrasting impacts across Antarctica in recent decades. The Antarctic Peninsula has warmed as much as anywhere in the Southern Hemisphere, while East Antarctica has shown little change or even a small cooling around the coast. The new research improves understanding of present and future climate change. The authors note it is important to distinguish between the Antarctic Ice Sheet - glacial ice - which is losing volume, and Antarctic sea ice - frozen seawater - which is expanding.

The research was funded by NASA and the Natural Environment Research Council.