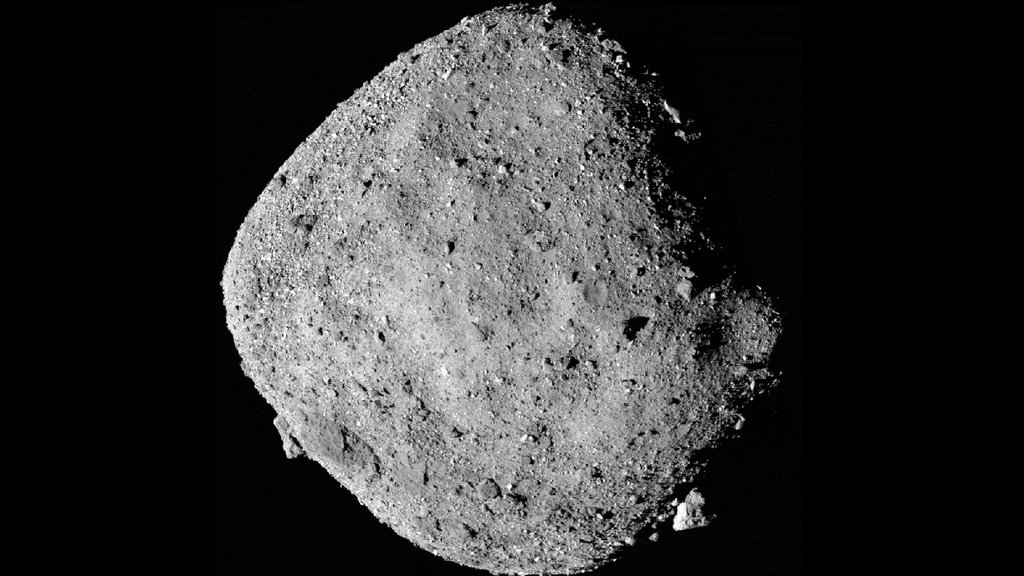 This mosaic image of asteroid Bennu is composed of 12 images collected on Dec. 2, 2018, by the OSIRIS-REx spacecraft's PolyCam instrument from a range of 15 miles (24 kilometers).
Credit: NASA/Goddard/University of Arizona 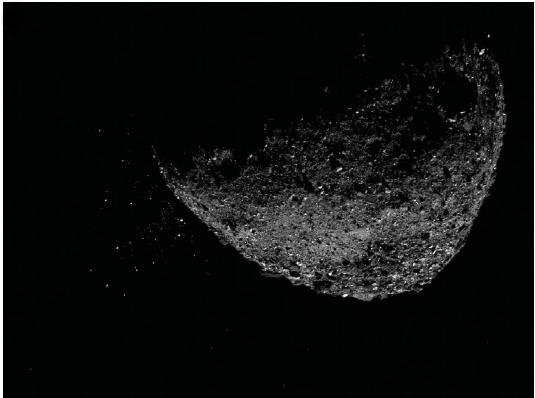 This view of asteroid Bennu ejecting particles from its surface on Jan. 6, 2019, was created by combining two images taken by the NavCam 1 imager aboard NASA's OSIRIS-REx spacecraft.
Credit: NASA/Goddard/University of Arizona/Lockheed Martin
Full Image Details

The asteroid, which is being studied by NASA's OSIRIS-REx, shows some surprising activity on its surface, and scientists are beginning to understand what might be causing it.

When NASA's OSIRIS-REx spacecraft arrived at asteroid (101955) Bennu, mission scientists knew that their spacecraft was orbiting something special. Not only was the boulder-strewn asteroid shaped like a rough diamond, its surface was crackling with activity, shedding small pieces of rock into space. Now, after more than a year and a half up close with Bennu, they're starting to better understand these dynamic particle-ejection events.

A collection of studies in a special edition of the Journal of Geophysical Research: Planets homes in on the asteroid and these enigmatic particles. The studies provide a detailed look at how these particles act when in space, possible clues as to how they're ejected, and even how their trajectories can be used to approximate Bennu's weak gravitational field.

Typically, we consider comets, not asteroids, to be the active ones. Comets are composed of ice, rock, and dust. As those ices are heated by the Sun, the vapor fizzes from the surface, dust and chunks of the comet nucleus are lost to space, and a long dusty tail forms. Asteroids, on the other hand, are composed mainly of rock and dust (and perhaps a smaller quantity of ice), but it turns out some of these space rocks can be surprisingly lively, too.

"We thought that Bennu's boulder-covered surface was the wild card discovery at the asteroid, but these particle events definitely surprised us," said Dante Lauretta, the OSIRIS-REx principal investigator and a professor at the University of Arizona. "We've spent the last year investigating Bennu's active surface, and it's provided us with a remarkable opportunity to expand our knowledge of how active asteroids behave."

Cameras on OSIRIS-REx (short for Origins, Spectral Interpretation, Resource Identification, and Security-Regolith Explorer) spotted rock particles being repeatedly launched into space during a January 2019 survey of the asteroid, which is about a third of a mile (565 meters) wide at its equator.

One of the studies, led by senior research scientist Steve Chesley at NASA's Jet Propulsion Laboratory in Southern California, found that most of these pebble-size pieces of rock, typically measuring around a quarter-inch (7 millimeters), were pulled back to Bennu under the asteroid's weak gravity after a short hop, sometimes even ricocheting back into space after colliding with the surface. Others took longer to return to the surface, remaining in orbit for a few days and up to 16 revolutions. And some were ejected with enough oomph to completely escape from the Bennu environs.

Using data collected by NASA's OSIRIS-REx mission, this animation shows the trajectories of rock particles after being ejected from asteroid (101955) Bennu's surface.

By tracking the journeys of hundreds of ejected particles, Chesley and his collaborators were also able to better understand what might be causing the particles to launch from the surface of Bennu. The particle sizes match what is expected for thermal fracturing (as the asteroid's surface is repeatedly heated and cooled while it rotates), but the locations of the ejection events also match the modeled impact locations of meteoroids (small rocks hitting the surface of Bennu as it orbits the Sun). It may even be a combination of these phenomena, added Chesley. But to come to a definitive answer, more observations are needed.

While their very existence poses numerous scientific questions, the particles also served as high-fidelity probes of Bennu's gravity field. Many particles were orbiting Bennu far closer than would be safe for the OSIRIS-REx spacecraft, and so their trajectories were highly sensitive to the irregular gravity of Bennu. This allowed researchers to estimate the Bennu's gravity even more precisely than was possible with OSIRIS-REx's instruments.

"The particles were an unexpected gift for gravity science at Bennu since they allowed us to see tiny variations in the asteroid's gravity field that we would not have known about otherwise," said Chesley.

On average, only one or two particles are ejected per day, and because they are in a very low-gravity environment, most are moving slowly. As such, they pose little threat to OSIRIS-REx, which will attempt to briefly touch down on the asteroid on Oct. 20 to scoop up surface material, which may even include particles that were ejected before dropping back to the surface.

If all goes as planned, the spacecraft will return to Earth in September 2023 with a cache of Bennu's material for scientists to study further.

NASA's Goddard Space Flight Center in Greenbelt, Maryland, provides overall mission management, systems engineering, and the safety and mission assurance for OSIRIS-REx. Dante Lauretta of the University of Arizona in Tucson is the principal investigator, and the University of Arizona also leads the science team and the mission's science observation planning and data processing. Lockheed Martin Space in Denver built the spacecraft and provides flight operations. Goddard and KinetX Aerospace are responsible for navigating the OSIRIS-REx spacecraft. OSIRIS-REx is the third mission in NASA's New Frontiers Program, which is managed by NASA's Marshall Space Flight Center in Huntsville, Alabama, for the agency's Science Mission Directorate in Washington.