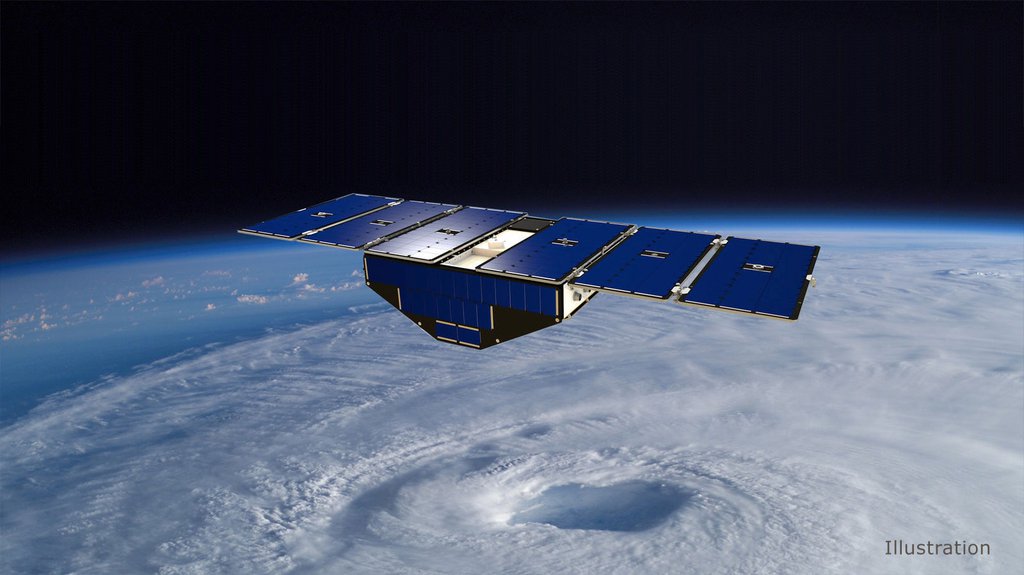 Illustration of one of the eight CYGNSS satellites in orbit above a hurricane.
Credit: NASA

The same GPS signals your phone uses for navigation can reveal winds hidden deep within hurricanes and detect water on land.

Eight briefcase-size satellites flying in a row may be key to improving forecasts of a hurricane's wind speed - detecting whether it will make landfall as a Category 1 or a Category 5. NASA's Cyclone Global Navigation Satellite System (CYGNSS) fleet, launched in 2016, was designed to show whether the same GPS signals your phone uses for navigation can be used to measure winds deep within a hurricane or typhoon. The answer appears to be a resounding yes.

Weather forecasting models have gotten much better at predicting the future track of a hurricane or typhoon, but they haven't improved at predicting its maximum wind speed, which scientists call intensity. That's because these tropical giants are steered by outside forces, such as regional winds, but their intensity depends on forces within each storm. And while many satellites can see the external winds, they can't see through a hurricane's thick clouds and rain.

CYGNSS Principal Investigator Christopher Ruf of the University of Michigan in Ann Arbor explained: "To predict intensity, you have to measure wind speed right in the middle of the storm and, until CYGNSS, there hasn't been a way to do it other than flying Hurricane Hunter planes."

The new CYGNSS data proved to be an excellent match with Hurricane Hunter data collected at the same time during 2017's hurricanes Maria, Irma and Jose. The eight small satellites - orbiting with only a 12-minute gap between each one - collected more data on each storm than could be gathered during a Hurricane Hunter flight.

How to See Through Rain and Clouds

To see what's in the atmosphere, many Earth-observing satellites send out electromagnetic signals with wavelengths that are just fractions of an inch long. To these short-wavelength signals, a drop of drizzle, speck of dust or any other airborne particle is an impenetrable obstacle. Even though the wavelengths are longer than these tiny particles, they are close enough in size that signals bounce off particles like a billiard ball colliding with another ball. By "reading" these scattered signals, researchers can discern the shape and location of clouds and other obstacles that the signals ran into.

In other words, short wavelengths let researchers see a storm but not see through it.

CYGNSS, on the other hand, uses GPS signals. Their wavelength is 7.5 inches (19 centimeters) long - far longer than either the short wavelengths most satellite instruments use or any raindrop ever measured. At that wavelength, Ruf said, "You don't see a raindrop at all. You just go right through it." That enables CYGNSS to see through a hurricane and measure the winds at the ocean surface.

GPS satellites, operated by the U.S. Air Force, are in a much higher orbit than the CYGNSS fleet. As a GPS satellite flies over a tropical cyclone, its signals pass unimpeded through the storm and bounce off the ocean surface. In their lower orbit, CYGNSS's downward-looking GPS receivers are able to intercept signals returning upward. Distortions in these bounced signals show how rough the sea is, enabling researchers to calculate the wind speed that caused the roughness.

CYGNSS' eight small satellites have worked well since launch, but the mission's scientists ran into a major hurdle on the path to processing the GPS signals into wind speed data. In designing the mission, scientists assumed that GPS signals are broadcast at constant strength. But when the scientists started to collect data, they found that the signal power from most GPS satellites changes during each orbit and that the degree of change differs from satellite to satellite. These variations threw off the CYGNSS satellites' measurements of high winds by as much as 11 mph (18 kph).

"We spent a year or more working on the problem, and we finally got it figured out," Ruf said. "Basically, the Air Force turns the power up when they go over certain parts of the world where bad guys are trying to jam the signals." Stronger signals are harder to jam.

Once the CYGNSS team understood the issue, they found a workaround. Each CYGNSS satellite carries not only a primary GPS receiver to collect signals bouncing up from Earth's surface, but also a secondary, smaller receiver for location and tracking. The team reprogrammed the smaller receivers to measure the strength of the broadcast signal arriving from overhead, which gave them the information they needed to correctly process the signals returning from below.

With that problem solved, the researchers could turn to the task of assessing how CYGNSS data would affect hurricane forecasts.

Experimenting with a research version of the same hurricane model that the National Oceanic and Atmospheric Administration (NOAA) uses for forecasts, the scientists added CYGNSS data to reconstructions of two of 2017's notable storms, hurricanes Harvey and Irma. The addition of CYGNSS data produced more realistic forecasts, not only of the storms' intensity, but of their tracks and structure. Other studies have shown similar improvements in forecasts of different storms.

To Ruf's surprise, CYGNSS has proven to have an unforeseen application. The CYGNSS team had planned to routinely turn off their receivers when the satellites fly over land, but the team decided to simplify their operations by having the satellites collect data all the time. Two postdoctoral students at NASA's Jet Propulsion Laboratory in Pasadena, California, decided to look at the data from over land. "It was really luck as much as anything, but it turns out there's all kinds of nice science you can do with the land data to measure soil moisture and flooding," Ruf said.

As the former students, Clara Chew (University Corporation for Atmospheric Research in Boulder, Colorado) and Hugo Carreno-Luengo (Barcelona, Spain), have documented the value of the data, NASA has now officially extended the scope of the mission and invited the science team to redefine the mission purposes. There may be other applications waiting to be discovered as the eight small CYGNSS satellites keep watching hidden winds in tropical storms.