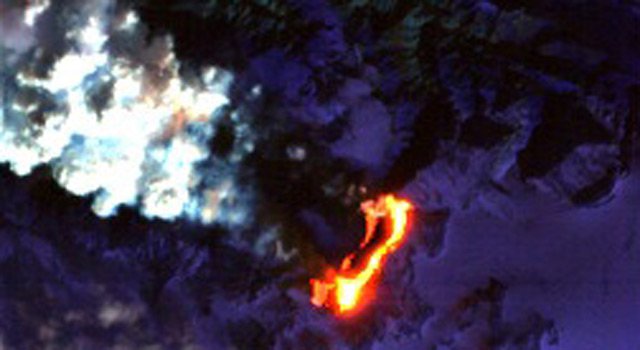 On March 20, 2010, Iceland's Eyjafjallajökull volcano (pronounced "Aya-fyatla-jo-kutl,") awakened for the first time in 120 years, spewing still-active lava fountains and flows. That day, a NASA "sensor web" -- a network of sensors on the ground and aboard NASA's Earth Observing-1 satellite, alerted researchers to this new volcanic "hot spot." The eruption was detected by autonomous "sciencecraft" software aboard the satellite, which is known as EO-1.

Sciencecraft software enables the spacecraft to analyze science data onboard to detect scientific events and respond by sending alerts, producing scientific products and/or re-imaging the event.

The software is typically able to notify researchers on the ground within 90 minutes of detecting events, and then rapidly sets up the satellite to observe them. In the case of the Iceland volcanic event, EO-1 was able to take advantage of recently uploaded "smart" software that allows the spacecraft to react quickly to an event and to rapidly downlink the data for processing by ground personnel in less than 24 hours. That process used to take three weeks for researchers working manually.

The artificial intelligence software directed EO-1's Hyperion and Advanced Land Imager instruments to target the volcano on its next passes over Iceland, which occurred on March 24, 29 and 30. After image data were transmitted to a ground station at NASA's Jet Propulsion Laboratory in Pasadena, Calif., computers automatically analyzed them and created maps and estimates of heat loss and eruption flow rate.

"Use of autonomous systems in this way represents a new way of doing science, where spacecraft can think for themselves and react to dynamic and often transient events," explained Ashley Davies, lead scientist for NASA's New Millennium Program-Space Technology 6 Autonomous Sciencecraft Experiment at JPL.

"This autonomy technology enables spacecraft to rapidly inform the ground of significant events, like the volcanic eruption," said Steve Chien, principal investigator for the Autonomous Sciencecraft at JPL. "This same technology has been used to track fires, flooding and other natural hazards."

Less than 24 hours after the satellite's first observation, the JPL team confirmed the volcano was emitting more than one billion watts of energy -- enough to power 40,000 passenger cars at the same time -- and discharging more than six tons of lava per second.

The fully automated process accelerated NASA's distribution of images to volcanologists studying the eruption. Rapid calculations of lava volume (known as the effusion rate) and location can help determine the likely direction of lava flows, while giving emergency managers advance warning to plan and deploy resources, and carry out informed evacuations.

Davies believes he and other researchers can use the "onboard autonomy" to achieve a greater and faster return rate of new Earth and planetary science data, while offering potentially life-saving benefits through rapid detection of natural events.

"There is concern that this eruption might precede another larger eruption at the Katla volcano nearby," said Davies. "If it does, we will be poised to provide imaging data of activity as the eruption evolves."