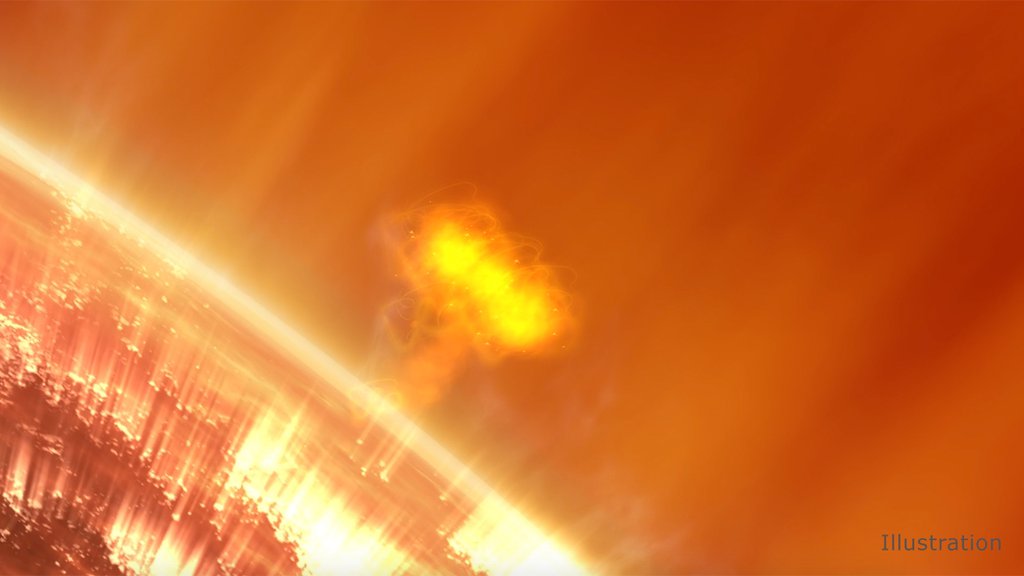 A new NASA mission called SunRISE will study what drives solar particle storms - giant surges of solar particles that erupt off of the Sun - as depicted in this illustration. Understanding how such storms affect interplanetary space can help protect spacecraft and astronauts. Credits: NASA

An array of six spacecraft, each about the size of a toaster oven, will help us understand our nearest star and better protect astronauts traveling beyond Earth.

NASA has selected a new mission to study how the Sun generates and releases giant space weather storms - known as solar particle storms - into planetary space. Not only will such information improve understanding of how our solar system works, but it ultimately can help protect astronauts traveling to the Moon and Mars by providing better information on how the Sun's radiation affects the space environment they must travel through.

The new mission, called the Sun Radio Interferometer Space Experiment (SunRISE), is an array of six CubeSats operating as one very large radio telescope. NASA has awarded $62.6 million to design, build and launch SunRISE by no earlier than July 1, 2023.

NASA chose SunRISE in August 2017 as one of two Mission of Opportunity proposals to conduct an 11-month mission concept study. In February 2019, the agency approved a continued formulation study of the mission for an additional year. SunRISE is led by Justin Kasper at the University of Michigan in Ann Arbor and managed by NASA's Jet Propulsion Laboratory (JPL) in Pasadena, California.

"We are so pleased to add a new mission to our fleet of spacecraft that help us better understand the Sun, as well as how our star influences the space environment between planets," said Nicky Fox, director of NASA's Heliophysics Division. "The more we know about how the Sun erupts with space weather events, the more we can mitigate their effects on spacecraft and astronauts."

The mission design relies on six solar-powered CubeSats - each about the size of a toaster oven - to simultaneously observe radio images of low-frequency emission from solar activity and share them via NASA's Deep Space Network. The constellation of CubeSats will fly within 6 miles (10 kilometers) of each other, above Earth's atmosphere, which otherwise blocks the radio signals SunRISE will observe. Together, the six CubeSats will create 3D maps to pinpoint where giant particle bursts originate on the Sun and how they evolve as they expand outward into space. This, in turn, will help determine what initiates and accelerates these giant jets of radiation. The six individual spacecraft will also work together to map, for the first time, the pattern of magnetic field lines reaching from the Sun out into interplanetary space.

NASA's Missions of Opportunity maximize science return by pairing new, relatively inexpensive missions with launches on spacecraft already approved and preparing to go into space. SunRISE proposed an approach for access to space as a hosted rideshare on a commercial satellite provided by Maxar of Westminster, Colorado, and built with a Payload Orbital Delivery System, or PODS. Once in orbit, the host spacecraft will deploy the six SunRISE spacecraft and then continue its prime mission.

Missions of Opportunity are part of the Explorers Program, which is the oldest continuous NASA program designed to provide frequent, low-cost access to space using principal investigator-led space science investigations relevant to the Science Mission Directorate's (SMD) astrophysics and heliophysics programs. The program is managed by NASA's Goddard Space Flight Center in Greenbelt, Maryland, for SMD, which conducts a wide variety of research and scientific exploration programs for Earth studies, space weather, the solar system and universe.

For more information about the Explorers Program, visit:

For information about NASA's heliophysics missions and activities, visit: