NASA Sees into the Eye of a Monster Storm on Saturn 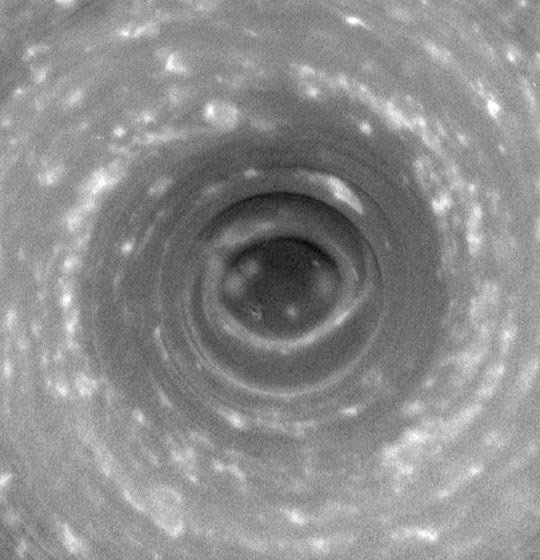 A swirling hurricane-like vortex at Saturn's south pole, where the vertical structure of the clouds is highlighted by shadows.+ Play movie (551Kb)
Credit: NASA/JPL/Space Science Institute 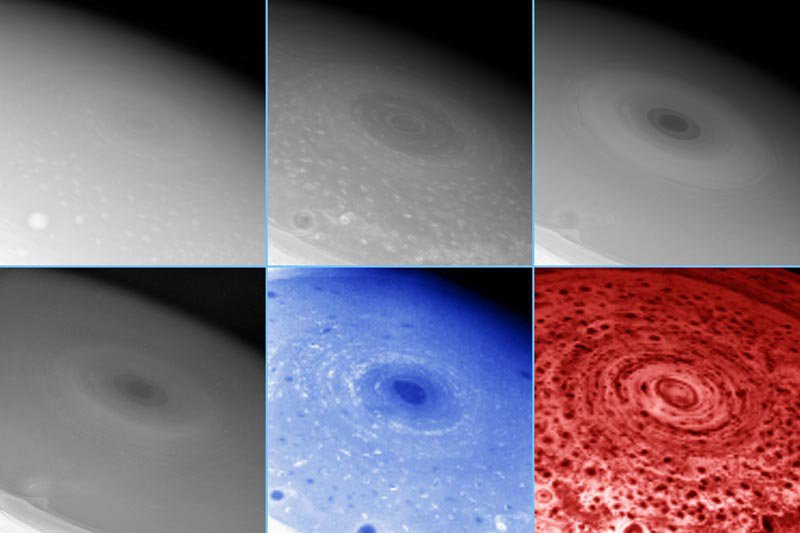 A view of the hurricane-like vortex from a different wavelength. See full image for more views.+ Full image and caption
Credit: NASA/JPL/Space Science Institute/University of Arizona 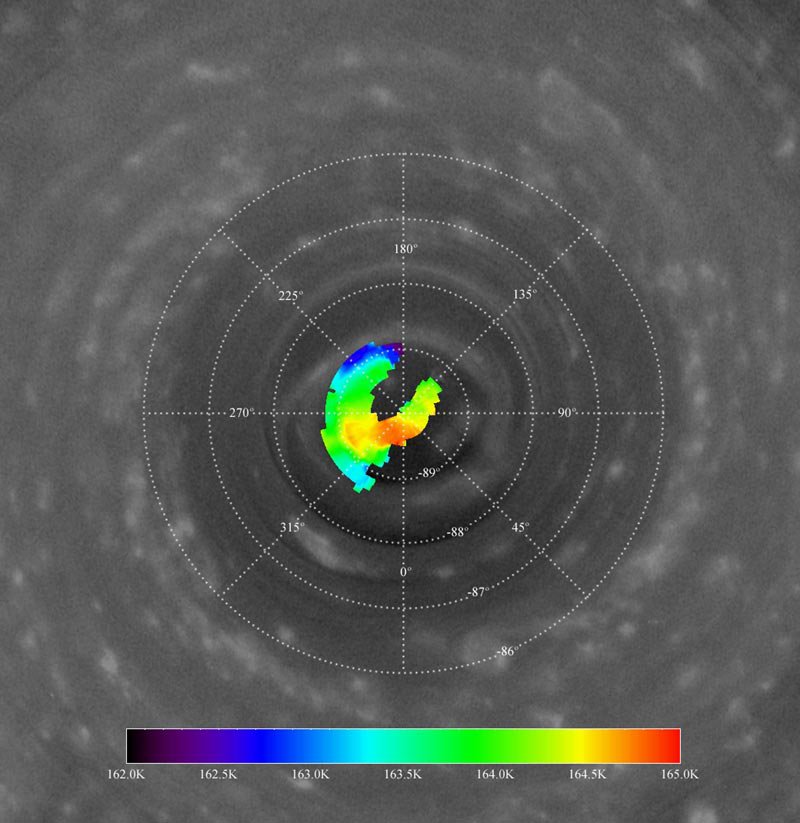 The Cassini data presented in this view appear to confirm a region of warm atmospheric descent into the eye of a hurricane-like storm locked to Saturn's south pole.+ Full image and caption
Credit: NASA/JPL/Space Science Institute/GSFC

The "hurricane" spans a dark area inside a thick, brighter ring of clouds. It is approximately 8,000 kilometers (5,000 miles) across, or two thirds the diameter of Earth.

"It looks like a hurricane, but it doesn't behave like a hurricane," said Dr. Andrew Ingersoll, a member of Cassini's imaging team at the California Institute of Technology, Pasadena. "Whatever it is, we're going to focus on the eye of this storm and find out why it's there."

A movie taken by Cassini's camera over a three-hour period reveals winds around Saturn's south pole blowing clockwise at 550 kilometers (350 miles) per hour. The camera also saw the shadow cast by a ring of towering clouds surrounding the pole, and two spiral arms of clouds extending from the central ring. These ring clouds, 30 to 75 kilometers (20 to 45 miles) above those in the center of the storm, are two to five times taller than the clouds of thunderstorms and hurricanes on Earth.

Eye-wall clouds are a distinguishing feature of hurricanes on Earth. They form where moist air flows inward across the ocean's surface, rising vertically and releasing a heavy rain around an interior circle of descending air that is the eye of the storm itself. Though it is uncertain whether such moist convection is driving Saturn's storm, the dark "eye" at the pole, the eye-wall clouds and the spiral arms together indicate a hurricane-like system.

Distinctive eye-wall clouds had not been seen on any planet other than Earth. Even Jupiter's Great Red Spot, much larger than Saturn's polar storm, has no eye or eye-wall and is relatively calm at the center.

This giant Saturnian storm is apparently different fromhurricanes on Earth because it is locked to the pole and does not drift around. Also, since Saturn is a gaseous planet, the storm forms without an ocean at its base.

In the Cassini imagery, the eye looks dark at infrared wavelengths where methane gas absorbs the light and only the highest clouds are visible.

"The clear skies over the eye appear to extend down to a level about twice as deep as the usual cloud level observed on Saturn," said Dr. Kevin H. Baines of Cassini's visual and infrared mapping spectrometer team at NASA's Jet Propulsion Laboratory, Pasadena, Calif. "This gives us the deepest view yet into Saturn over a wide range of wavelengths, and reveals a mysterious set of dark clouds at the bottom of the eye."

Infrared images taken by the Keck I telescope in Mauna Kea, Hawaii, had previously shown Saturn's south pole to be warm. Cassini's composite infrared spectrometer has confirmed this with higher-resolution temperature maps of the area. The spectrometer observed a temperature increase of about 2 Kelvin (4 degrees Fahrenheit) at the pole. The instrument measured high temperatures in the upper troposphere and stratosphere, regions higher in the atmosphere than the clouds seen by the Cassini imaging instruments.

"The winds decrease with height, and the atmosphere is sinking, compressing and heating over the South Pole," said Dr. Richard Achterberg, a member of Cassini's composite infrared spectrometer team at NASA's Goddard Spaceflight Center, Greenbelt, Md.

Observations taken over the next few years, as the south pole season changes from summer to fall, will help scientists understand the role seasons play in driving the dramatic meteorology at the south pole of Saturn.

The Cassini-Huygens mission is a cooperative project of NASA, the European Space Agency and the Italian Space Agency. The Jet Propulsion Laboratory, a division of the California Institute of Technology in Pasadena, manages the Cassini-Huygens mission for NASA’s Science Mission Directorate, Washington. The Cassini orbiter was designed, developed and assembled at JPL. The imaging team is based at the Space Science Institute, Boulder, Colo. The visual and infrared mapping spectrometer team is based at the University of Arizona. The composite infrared spectrometer team is based at Goddard.