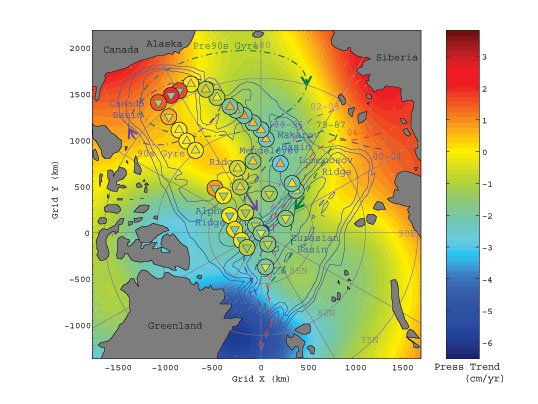 This shows contours of the trend in ocean bottom pressure from 2002 to 2006 as measured by GRACE along with hypothetical trends that would apply at the circles if ocean salinity reverted from 1990s values to climatological conditions over the same period. 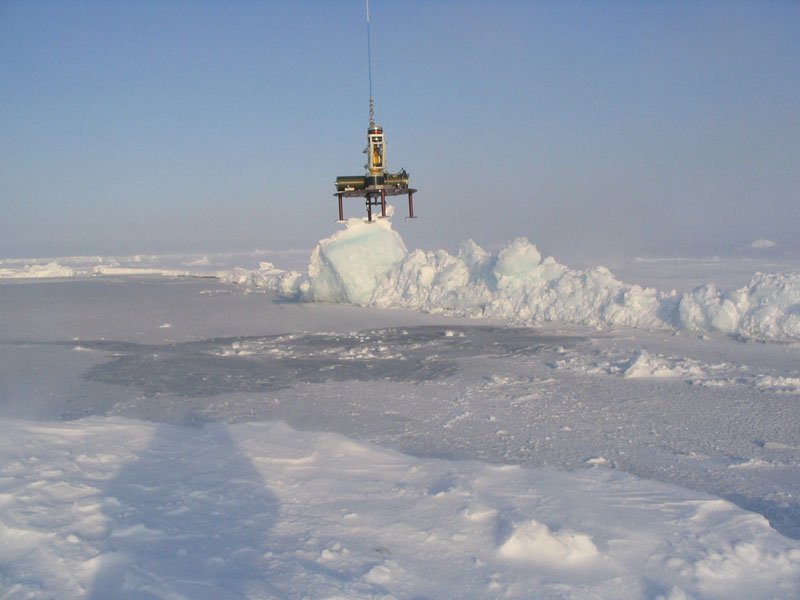 PASADENA, Calif. -- A team of NASA and university scientists has detected an ongoing reversal in Arctic Ocean circulation triggered by atmospheric circulation changes that vary on decade-long time scales.

PASADENA, Calif. – A team of NASA and university scientists has detected an ongoing reversal in Arctic Ocean circulation triggered by atmospheric circulation changes that vary on decade-long time scales. The results suggest not all the large changes seen in Arctic climate in recent years are a result of long-term trends associated with global warming.

The team, led by James Morison of the University of Washington's Polar Science Center Applied Physics Laboratory, Seattle, used data from an Earth-observing satellite and from deep-sea pressure gauges to monitor Arctic Ocean circulation from 2002 to 2006. They measured changes in the weight of columns of Arctic Ocean water, from the surface to the ocean bottom. That weight is influenced by factors such as the height of the ocean's surface, and its salinity. A saltier ocean is heavier and circulates differently than one with less salt.

The very precise deep-sea gauges were developed with help from the National Oceanic and Atmospheric Administration; the satellite is NASA's Gravity Recovery and Climate Experiment (Grace). The team of scientists found a 10-millibar decrease in water pressure at the bottom of the ocean at the North Pole between 2002 and 2006, equal to removing the weight of 10 centimeters (four inches) of water from the ocean. The distribution and size of the decrease suggest that Arctic Ocean circulation changed from the counterclockwise pattern it exhibited in the 1990s to the clockwise pattern that was dominant prior to 1990.

Reporting in Geophysical Research Letters, the authors attribute the reversal to a weakened Arctic Oscillation, a major atmospheric circulation pattern in the northern hemisphere. The weakening reduced the salinity of the upper ocean near the North Pole, decreasing its weight and changing its circulation.

"Our study confirms many changes seen in upper Arctic Ocean circulation in the 1990s were mostly decadal in nature, rather than trends caused by global warming," said Morison.

"While some 1990s climate trends, such as declines in Arctic sea ice extent, have continued, these results suggest at least for the 'wet' part of the Arctic -- the Arctic Ocean -- circulation reverted to conditions like those prevalent before the 1990s," he added.

The Arctic Oscillation was fairly stable until about 1970, but then varied on more or less decadal time scales, with signs of an underlying upward trend, until the late 1990s, when it again stabilized. During its strong counterclockwise phase in the 1990s, the Arctic environment changed markedly, with the upper Arctic Ocean undergoing major changes that persisted into this century. Many scientists viewed the changes as evidence of an ongoing climate shift, raising concerns about the effects of global warming on the Arctic.

Morison said data gathered by Grace and the bottom pressure gauges since publication of the paper earlier this year highlight how short-lived the ocean circulation changes can be. The newer data indicate the bottom pressure has increased back toward its 2002 level. "The winter of 2006-2007 was another high Arctic Oscillation year and summer sea ice extent reached a new minimum," he said. "It is too early to say, but it looks as though the Arctic Ocean is ready to start swinging back to the counterclockwise circulation pattern of the 1990s again."

Morison cautioned that while the recent decadal-scale changes in the circulation of the Arctic Ocean may not appear to be directly tied to global warming, most climate models predict the Arctic Oscillation will become even more strongly counterclockwise in the future. "The events of the 1990s may well be a preview of how the Arctic will respond over longer periods of time in a warming world," he said.

Grace monitors tiny month-to-month changes in Earth's gravity field caused primarily by the movement of water in Earth's land, ocean, ice and atmosphere reservoirs. As such it can infer changes in the weight of columns of ocean water. In contrast, the pressure gauges installed on the sea floor in 2005-2006 directly measured water pressure at the bottom of the ocean. Gauge data were remotely recovered during the first year of the study.

"Satellite altimeters, such as NASA's Jason, are ideal for studying ocean circulation but can't be used at Earth's poles due to ice cover," said study co-author Ron Kwok of NASA's Jet Propulsion Laboratory, Pasadena, Calif. "Our results show Grace can be a powerful tool for tracking changes in the distribution of mass in the Arctic Ocean, as well as its circulation."

Grace is a partnership between NASA and the German Aerospace Center (DLR). The University of Texas Center for Space Research, Austin, has overall mission responsibility. JPL developed the twin satellites. DLR provided the launch, and GeoForschungsZentrum Potsdam, Germany, operates Grace. For more on Grace: http://www.csr.utexas.edu/grace/ .

The study was funded by the National Science Foundation.