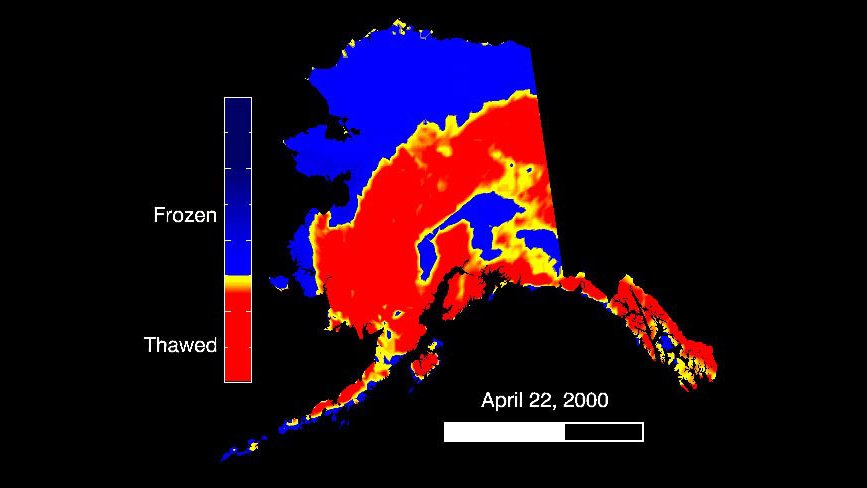 Alaska's freeze and thaw by satellite.

Using a suite of microwave remote sensing instruments aboard satellites, scientists at NASA's Jet Propulsion Laboratory, Pasadena, Calif., and the University of Montana, Missoula, have observed a recent trend of earlier thawing across the northern high latitudes.

Using a suite of microwave remote sensing instruments aboard satellites, scientists at NASA's Jet Propulsion Laboratory, Pasadena, Calif., and the University of Montana, Missoula, have observed a recent trend of earlier thawing across the northern high latitudes.

This regional thawing trend, advancing almost one day a year since 1988, has the potential to alter the cycle of atmospheric carbon dioxide intake and release by vegetation and soils across the region, potentially resulting in changes in Earth's climate. The lengthening growing season appears to be promoting more carbon uptake by the vegetation than is being released into the atmosphere for the region. How long this trend will occur depends on whether soils continue to remain cold and wet.

Research scientists have been studying the freeze/thaw dynamics in North America and Eurasia's boreal forests and tundra to decipher effects on the timing and length of the growing season. These regions encompass almost 30 percent of global land area. They store a major portion of Earth's carbon in vegetation,, in seasonally frozen and permafrost soils. Large expanses of boreal forest and tundra are underlain by permafrost, a layer of permanently frozen soil found underneath the active, seasonally thawed soil.

"Frozen soil can store carbon for hundreds to thousands of years," said lead author Dr. Kyle McDonald of JPL, "but when the permafrost thaws and begins to dry out, it releases the carbon back into the atmosphere." The concern is that eventually carbon released from the soil will prevail over the amount being taken in by growing plants. Carbon dioxide levels in the atmosphere would increase at an accelerated rate, fostering even greater warming of the region and affecting global climate.

With help from NASA radars and other orbiting satellite microwave remote sensing instruments, including the National Oceanic and Atmospheric Administration's Special Scanning Microwave/Imager, scientists can monitor growing season dynamics of the global boreal forest and tundra daily. These instruments sense the electrical properties of water in the landscape, allowing scientists to determine exactly when and where the springtime thaw occurs.

Because of the large extent and location of boreal forest and tundra, and the global reservoir of carbon stored in their vegetation and soils, this region is extremely sensitive to environmental change. It has the capacity to dramatically impact Earth's climate.

"If global climate change is happening, here's where you would expect to see it first," McDonald said.

As the research team observed, the earlier the spring thaw occurs, the longer the growing season. These changes appear to be promoting plant growth for the region. The longer growing season allows plants to remove more carbon dioxide from the atmosphere over a longer period of time.

Carbon dioxide is an important greenhouse gas that, if left in the atmosphere, would promote additional warming. The plants release oxygen and store the carbon as biomass that eventually decomposes and transfers the carbon into the soil. Soil microbes decompose dead plant material, returning a portion of the soil carbon back into the atmosphere. The rate at which soil microbes decompose plant material and release carbon to the atmosphere is also very sensitive to temperature. It could potentially increase with warming temperatures and longer growing seasons.

From this general study, McDonald, Dr. John Kimball of the University of Montana, and JPL's Erika Podest have lead three different investigations, each focusing on different noticeable changes in the boreal region. Results of three related papers on this research will be presented to the American Geophysical Union's Fall Meeting this week in San Francisco.

The research is funded by NASA's Earth Science Enterprise. The Enterprise is dedicated to understanding the Earth as an integrated system and applying Earth System Science to improve prediction of climate, weather, and natural hazards using the unique vantage point of space.

For information about NASA's Earth Science Enterprise on the Internet, visit: http://www.earth.nasa.gov .

For information about NASA, visit: http://www.nasa.gov.