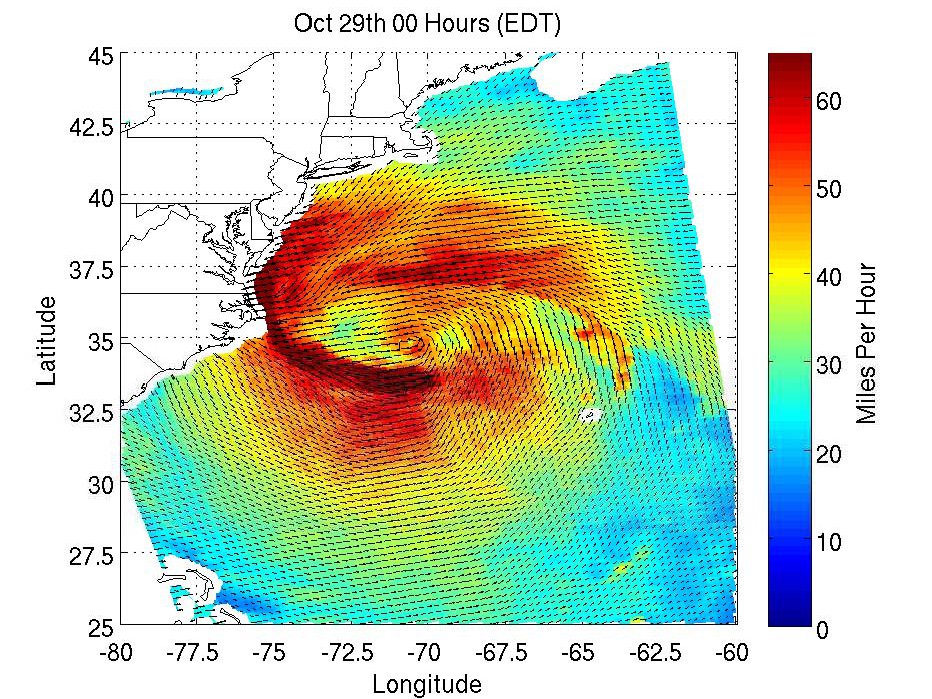 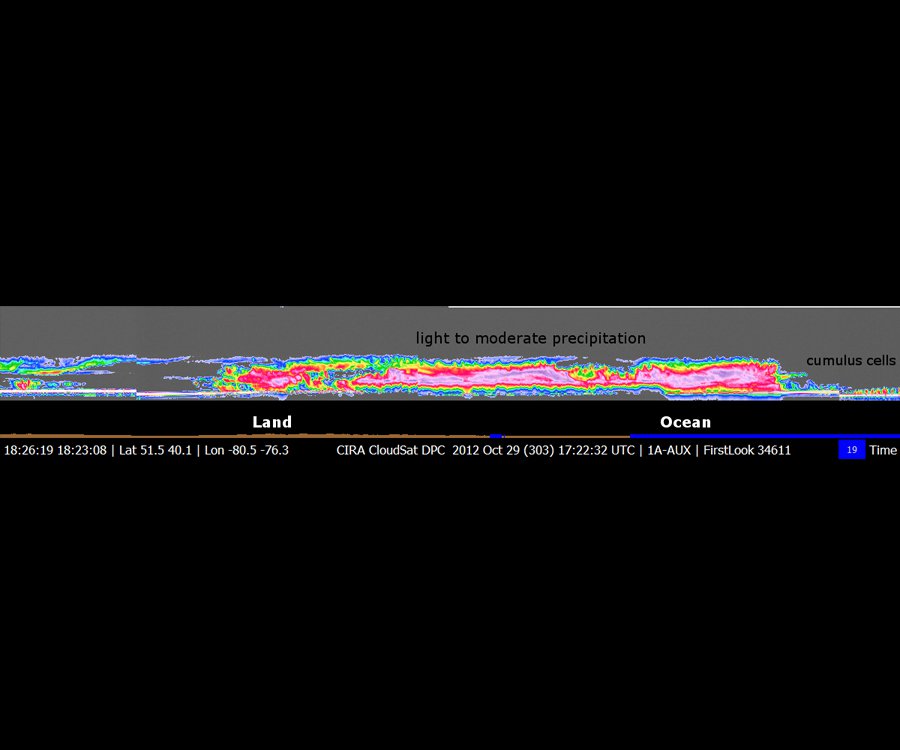 NASA's CloudSat spacecraft overpassed Hurricane Sandy on October 29, 2012 at approximately 11:25 a.m. PDT (2:25 p.m. EDT) just as Sandy was approaching the Atlantic coastline. Sandy contained estimated maximum sustained winds of 90 miles per hour (78 knots). CloudSat, flying in formation with the A-TRAIN constellation of satellites, provides detailed radar observations of clouds including the vertical distribution of precipitation and cloud structure. At the expense of horizontal resolution, CloudSat observations produce detailed vertical resolution of clouds and precipitation starting at the surface through 19 miles (30 kilometers) in the atmosphere. CloudSat profiles the clouds and distinguishes the amount and type of water, liquid or ice, found throughout these storm systems.› Full image and caption
Credit: NASA/JPL-Caltech 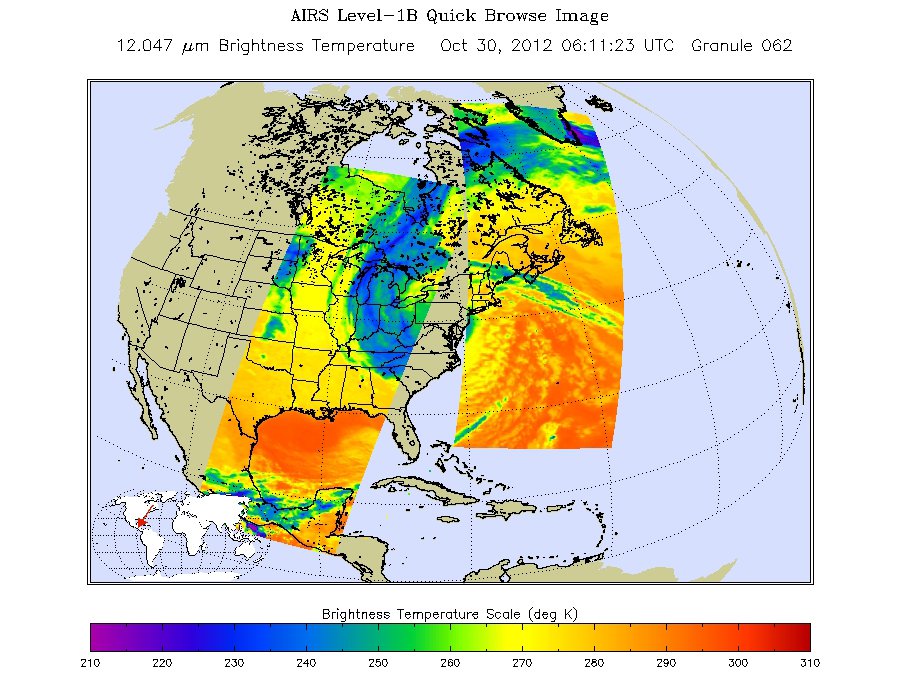 Early Tuesday, Oct. 30, 2012, Hurricane Sandy continued inland, moving to the northwest over Pennsylvania. Swaths of infrared measurements taken over two orbits of NASA's Aqua satellite by the Atmospheric Infrared Sounder are displayed here to show the area of the Northeastern United States and Canada feeling the impact of this large storm at 12:00 a.m. PDT (3:00 a.m. EDT). Each data swath is 1,023 miles across (1,650 kilometers).› Full image and caption
Credit: NASA/JPL-Caltech 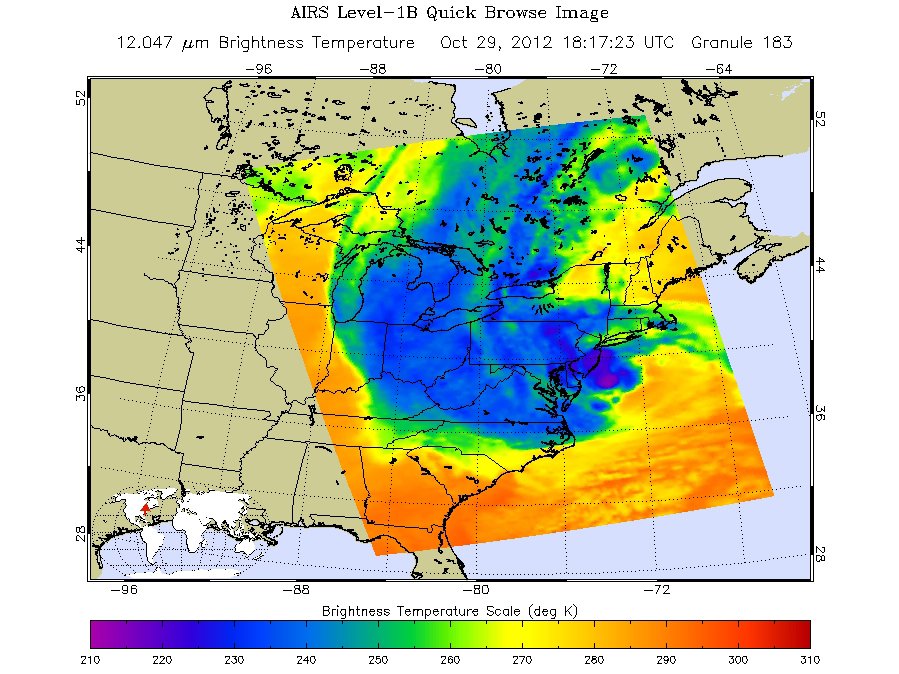 NASA's Atmospheric Infrared Sounder (AIRS) instrument on NASA's Aqua spacecraft captured this infrared image of Hurricane Sandy, another weather front to the west and cold air coming down from Canada at 2:17 p.m. EDT Oct. 29. The hurricane center is the darkest purple area in the Atlantic just to the east of the New Jersey coast, reflecting Sandy's areas of heaviest rainfall.
Credit: NASA/JPL-Caltech/ 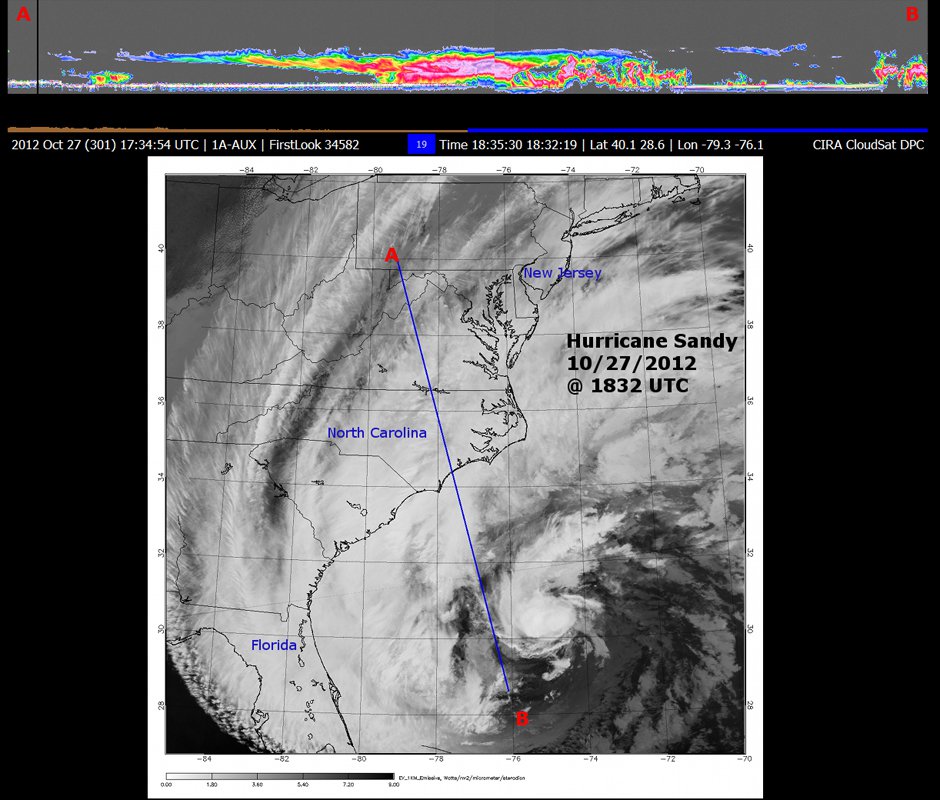 NASA CloudSat image (top) of Hurricane Sandy as it moved up the U.S. East Coast on Oct. 27 and crossed over the warm waters of the Gulf Stream. The image shows a 3-D cross-section of the storm over the path traveled, from point A to point B. Red and purple areas indicate the largest amounts of cloud water or precipitation. The black-and-white image below, from NASA's Moderate Resolution Imaging Spectroradiometer (MODIS) instrument on NASA's Aqua spacecraft, shows an aerial perspective of the storm and the CloudSat overpass.
Credit: NASA/JPL-Caltech/ 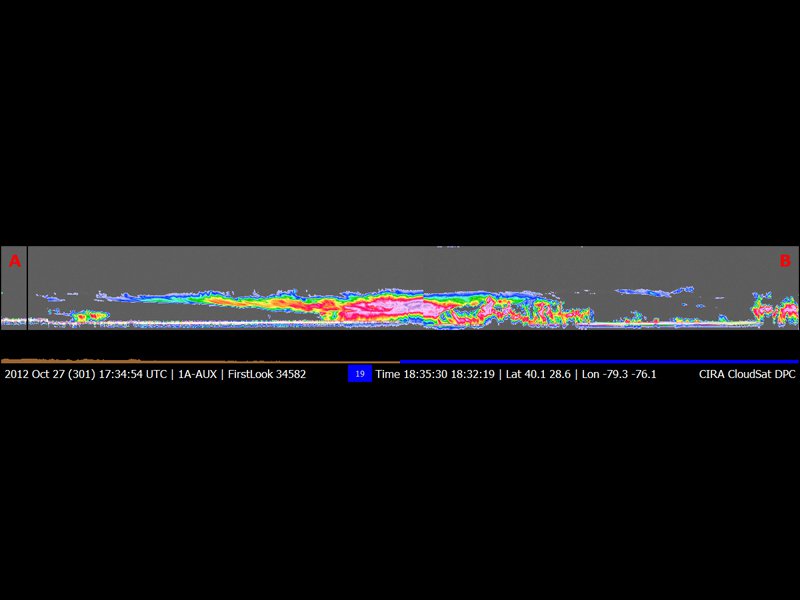 NASA's CloudSat passed over Sandy at 10:32 a.m. EDT on Oct. 27, 2012. Light to moderate precipitation associated with parts of the outer bands of Hurricane Sandy were moving on shore into parts of North Carolina where CloudSat intersected the system. Cloudsat showed heavier showers and thunderstorms further south and east of the Atlantic coastline over the open water.
Credit: NASA/JPL/The Cooperative Institute for Research in the Atmosphere (CIRA), Colorado State University

NASA satellites are observing extremely dangerous and historic Hurricane Sandy as it moves into the northeastern U.S.

Hurricane Sandy is expected to affect as many as 60 million Americans this week as it combines with other weather fronts to create an anticipated 'superstorm.' Satellites and instruments from NASA's Jet Propulsion Laboratory, Pasadena, Calif., are busy monitoring the storm. New information from the satellites will be added to this page as it becomes available.

NASA's Atmospheric Infrared Sounder (AIRS) instrument on NASA's Aqua spacecraft captured this infrared image of Hurricane Sandy at 2:17 p.m. EDT on Oct. 29, 2012. The center of the storm, denoted by the darkest purple area in the Atlantic just to the east of New Jersey, was located approximately 260 miles (418 kilometers) south-southeast of New York City, moving to the north-northwest at 18 mph (16 knots). The storm's coldest cloud-top temperatures are indicated by the brightest shades of purple, and show where Sandy's heaviest rainfall is occurring. Sandy is merging with a storm front from the west and cold air from Canada to form a 'superstorm' that is expected to affect a broad area of the eastern U.S. for days.

A 3-D side profile image and associated animation of Hurricane Sandy showing the storm's vertical structure were created from data obtained by NASA's CloudSat satellite as it flew over Hurricane Sandy at 2:32 p.m. EDT on Oct. 27, 2012. At the time, Sandy was located about 336 miles (540 kilometers) southeast of Charleston, S.C., and was a minimal Category 1 hurricane at the time, with maximum sustained winds of 75 mph (65 knots). Sandy was moving slowly to the northeast at 11 mph (10 knots), almost parallel to the southeast United States coast, and was directly crossing the warm waters of the Gulf Stream. The colors in the CloudSat image indicate the strength of the CloudSat radar's returned signal, termed the reflectivity. Red and purple areas indicate the greatest amounts of cloud water or precipitation.

CloudSat flew over the storm just to the west of its inner core, traveling from points A to B on the CloudSat image and the larger black-and-white reference image from NASA's Moderate Resolution Imaging Spectroradiometer (MODIS) instrument on NASA's Aqua spacecraft. At the time, light to moderate precipitation associated with parts of Sandy's outer bands was moving onshore into parts of North Carolina, where CloudSat intersected the system. Heavier showers and thunderstorms were located farther south and east of the Atlantic coastline over the open water, where the estimated ocean temperature is approximately 81 degrees Fahrenheit (27 degrees Celsius). CloudSat's signal tends to weaken in these areas of heavier convection when raindrops become larger than 0.12 inches (3 millimeters) in diameter. The cloud shield associated with Hurricane Sandy extended well over 620 miles (1,000 kilometers) from the storm's center, covering parts of eastern Kentucky, Tennessee, Virginia and West Virginia with mid- and high-level cloudiness (cirrus and altocumulus clouds).

The animation begins by depicting global cloud motion for the 72 hours prior to CloudSat's observation of Sandy, from NOAA's Geostationary Operational Environmental Satellites. It then zooms in to reveal the vertical cross-section of Sandy from CloudSat. The storm's most intense convection and precipitation are depicted in shades of oranges, reds and purples.

The Multi-angle Imaging SpectroRadiometer (MISR) instrument aboard NASA's Terra spacecraft captured this imagery and data over Hurricane Sandy as the storm approached the U.S. east coast on Oct. 28, 2012. The image at left covers an area 250 miles (400 kilometers) wide and extends from Massachusetts to Florida; it shows much of the western half of the hurricane. The eye of the storm is to the right and outside of the observed area. High-altitude clouds cover much of the image, with low-level clouds visible over the Bahamas.

The map at lower right is overlain with cloud-tracked wind vectors derived from MISR stereo imagery. The arrows point in the direction of wind flow, and their lengths are proportional to wind speed. The color-coding indicates the measured height of the wind field. The cyclonic (counter-clockwise) rotation of the winds associated with Hurricane Sandy are readily apparent in the low-level winds off the eastern coast of Florida, with speeds exceeding 45 mph (20 meters per second).

The map at upper right shows details of the wind field around New York, northern New Jersey, Pennsyvania and New England. In this region, the low-level winds are coming from the east, pushing water toward the coast, leading to calls for evacuations in the area. The upper-level winds seen by MISR are coming from the south, with much greater strength. Some of the wind speeds exceed 92 mph (41 meters per second) at the upper levels.

For more detailed technical information on Sandy, please visit JPL's Hurricane and Severe Storm Sentinel (HS3) portal at: http://hs3.jpl.nasa.gov/HS3/index.jsp. A Google Earth plugin is required to view the website. The website, created for scientists supporting this year's NASA HS3 field campaign, is a collaboration with other institutions. It integrates data from satellites, models and direct measurements from many sources to help researchers quickly locate information about current and recent oceanic and atmospheric conditions. The composite images and data are updated every hour and are displayed using a Google Earth plug-in. With a few mouse clicks, users can manipulate data sets to provide insights on storms that aren't possible by looking at single data sets alone. The data can be animated and downloaded on demand.