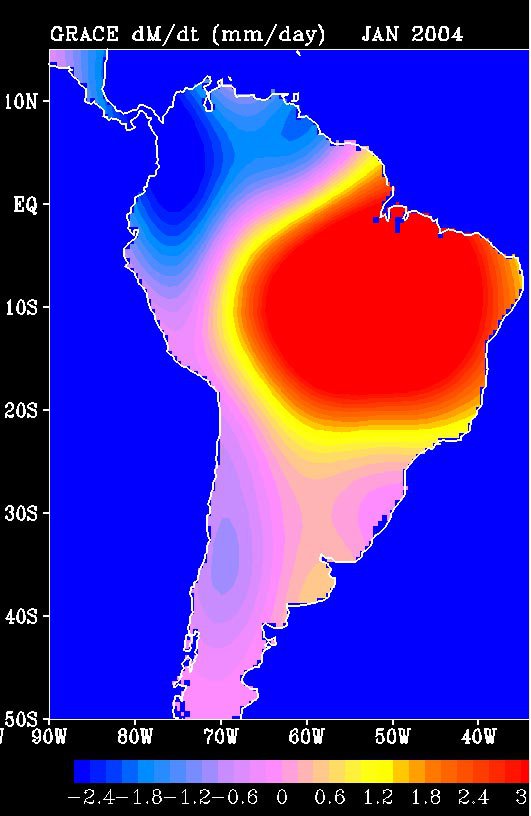 Data from NASA's Gravity Recovery and Climate Experiment (Grace) show the distribution of water over South America in January 2004. By tracking the month-to-month changes in the distribution of water mass over time and comparing it with data from other NASA satellites, scientists were able to monitor and measure the complete cycle of water movement for the continent. Red signifies higher water mass, blue lower water mass.
Credit: NASA/JPL

For the first time, NASA scientists using space-based measurements have directly monitored and measured the complete cycle of water movement for an entire continent.

For the first time, NASA scientists using space-based measurements have directly monitored and measured the complete cycle of water movement for an entire continent.

Using satellite data from three Earth-orbiting NASA missions -- Quick Scatterometer (QuikScat), Gravity Recovery and Climate Experiment (Grace), and Tropical Rainfall Measuring Mission (TRMM) -- a science team at NASA's Jet Propulsion Laboratory, Pasadena, Calif., directly observed the seasonal cycling of water into and out of South America. Their research confirmed that the amount of water as rain or snow flowing into the continent from the marine atmosphere is in balance with the estimated amount of water returned to the ocean by the continent's rivers.

The findings are significant because until now there had been no direct way to monitor continental water balance. Scientists had been estimating the balance through regional ground-based measurements and computer models. The findings are published in Geophysical Research Letters.

"Having a better understanding of the processes in which water is transported from Earth's oceans to continental land masses is important to a variety of climate and ecology studies," said Dr. Timothy Liu, science team leader at JPL. "We'll have greater understanding of floods and drought, surface and ground water quality, and the availability of freshwater resources for agriculture and ecosystems."

To calculate the continent's overall water balance equation, Liu's team compared the amount of water coming into the continent with that going out. A statistical method was developed to estimate water transport using QuikScat's surface wind data and atmospheric water vapor data from microwave radiometers. Rainfall data from NASA's TRMM were used to measure the rainfall over the continent. Water going out from the continent was measured by combining data from river flow gauges with projections from models that predict the amount of water discharged at the rivers' mouths.

The river discharge rates were collected over periods ranging from a few years to a century, depending on the river basin and locality, and were averaged to determine an annual cycle. Scientists compared that estimate with the monthly changes in South America's mass over two annual cycles, from August 2002 to July 2004, as measured by Grace. They determined that the seasonal mass change is dominated by changes in the amount of surface and underground water.

Liu said the large-scale geographic patterns of rainfall and mass change rates follow an apparent counterclockwise annual march over the northern half of South America. With relatively small amounts of evaporation, and small or slow surface water outflow, the mass change over a certain region is primarily driven by rainfall. The team found the annual variation of rainfall in the Amazon and La Plata basins -- the two largest drainage basins in South America -- correlates closely with the Grace measurements of their mass change. In addition, measurements of the flow of moisture across relevant segments of the continent's Pacific and Atlantic coasts were found to correspond with measurements of the annual cycle of rainfall in the two basins and the Andes Mountains.

Liu said the study strongly validates the credibility of space-based measurements to study continental water balance, but is only a beginning. "Planned reprocessing of QuikScat, Grace and TRMM data to improve the data quality and resolution, when combined with data from planned future missions, promises to further enhance our understanding of water balance on a global basis," he said. Those planned future missions include NASA's Global Precipitation Measurement Mission, the European Space Agency's Soil Moisture and Salinity Sensor and NASA's Aquarius satellite.

Grace is a joint partnership between NASA and the Deutsches Zentrum fur Luft- und Raumfahrt. The identical twin Grace satellites are managed by JPL. Grace tracks changes in Earth's gravity field, primarily caused by the movement of water. The University of Texas Center for Space Research has overall mission responsibility. GeoForschungsZentrum Potsdam, Potsdam, Germany, is responsible for German mission elements. Science data processing, distribution, archiving and product verification are managed jointly by JPL, the University of Texas and GeoForschungsZentrum Potsdam.

TRMM is a joint mission between NASA and the Japan Aerospace Exploration Agency that monitors and studies tropical rainfall. It is managed by NASA's Goddard Space Flight Center, Greenbelt, Md.

An animation illustrating the annual variation of South America's water balance as detected by Grace is available at: http://airsea.jpl.nasa.gov/movie/sa.qt .

For more information on Grace, QuikScat and TRMM on the Web, visit: http://www.csr.utexas.edu/grace ; http://winds.jpl.nasa.gov ; and http://trmm.gsfc.nasa.gov/ .