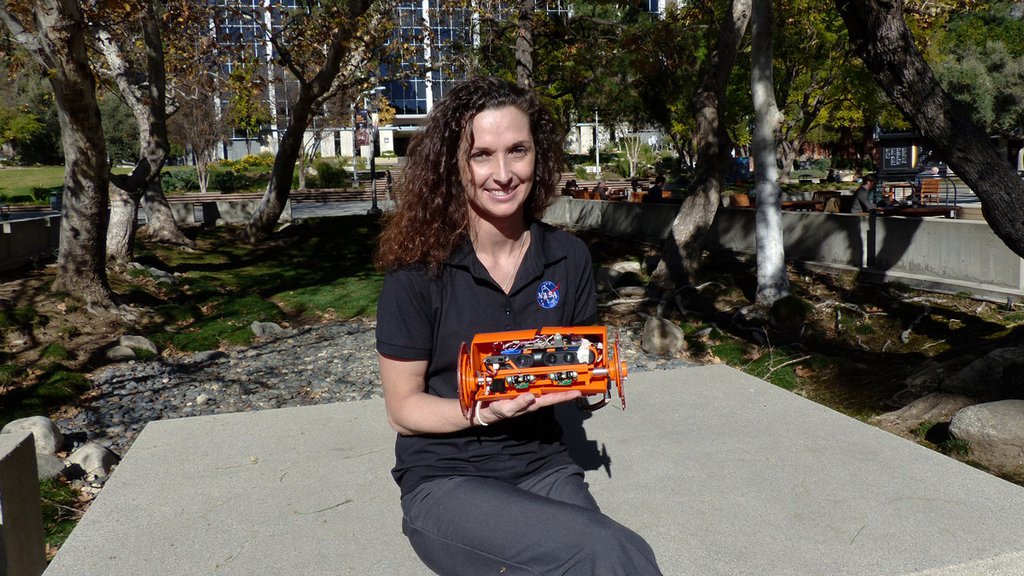 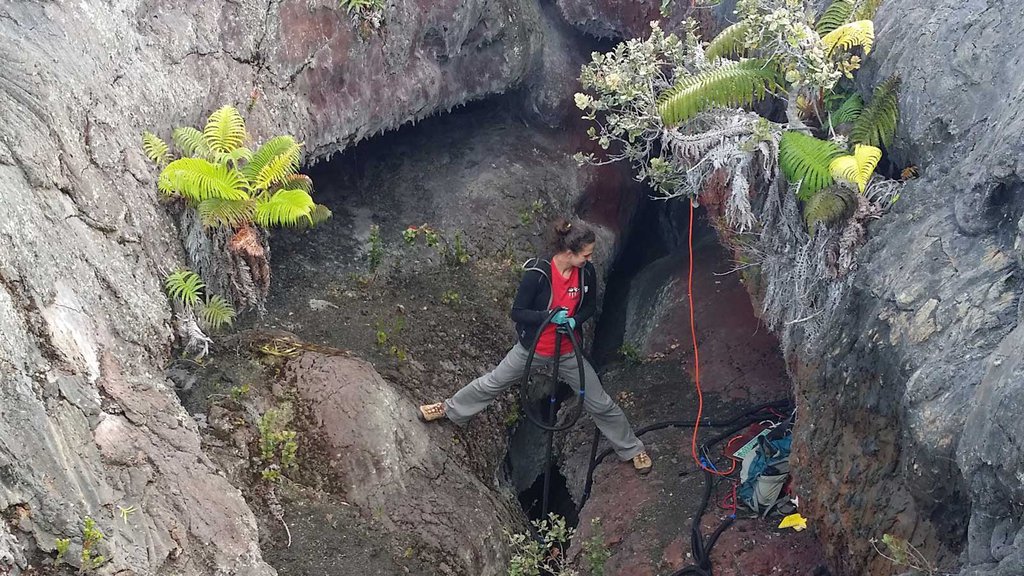 Carolyn Parcheta, a postdoctoral fellow at NASA's Jet Propulsion Laboratory, worked with VolcanoBot 1 in Hawaii in May 2014. The robot explored a fissure -- a crack that erupts magma - that is now inactive on the active Kilauea volcano in Hawaii.
Credit: NASA/JPL-Caltech 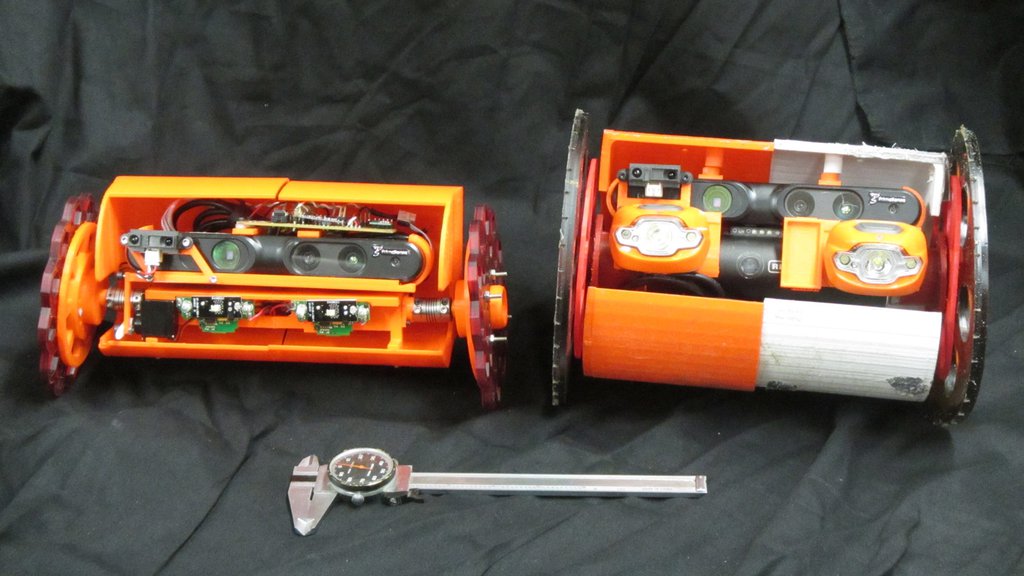 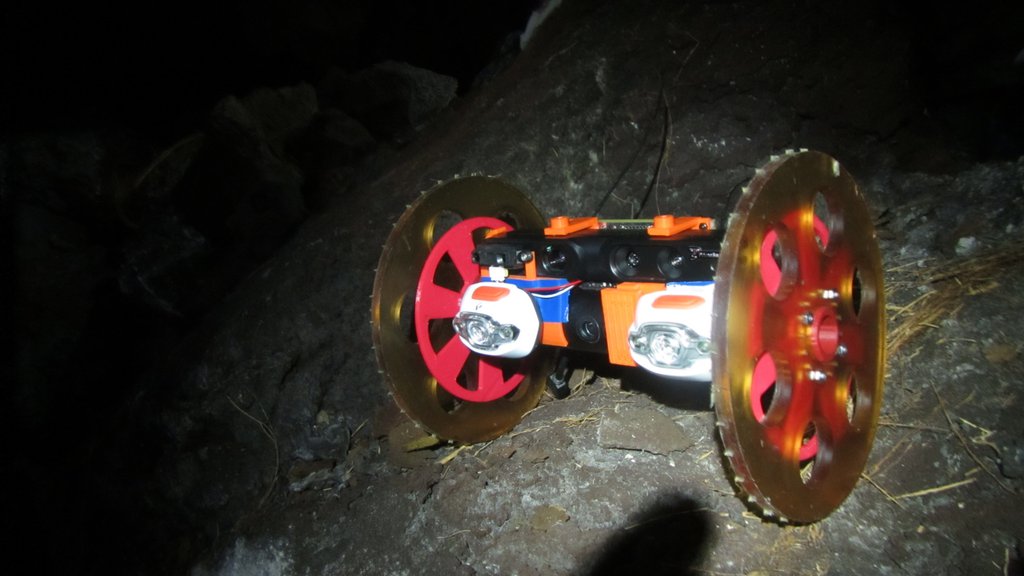 VolcanoBot 1, shown here in a lava tube -- a structure formed by lava -- explored the Kilauea volcano in Hawaii in May 2014. The robot is enabling researchers at NASA's Jet Propulsion Laboratory to put together a 3-D map of the fissure.
Credit: NASA/JPL-Caltech

-- Researchers at NASA's Jet Propulsion Laboratory are developing robots to explore volcanoes
-- VolcanoBot 1 was tested at Kilauea volcano in Hawaii
-- A lighter, smaller VolcanoBot 2 will be tested this year

"I said to myself, I'm going to do that some day," said Parcheta, now a NASA postdoctoral fellow based at NASA's Jet Propulsion Laboratory in Pasadena, California.

Exploring volcanoes is risky business. That's why Parcheta and her co-advisor, JPL robotics researcher Aaron Parness, are developing robots that can get into crevices where humans wouldn't be able to go, gaining new insights about these wondrous geological features.

"We don't know exactly how volcanoes erupt. We have models but they are all very, very simplified. This project aims to help make those models more realistic," Parcheta said.

Parcheta's research endeavors were recently honored in National Geographic's Expedition Granted campaign, which awards $50,000 to the next "great explorer." Parcheta was a finalist, and was voted number 2 by online participants for her research proposal for exploring volcanoes with robots.

"Having Carolyn in the lab has been a great opportunity for our robotics team to collaborate with someone focused on the geology. Scientists and engineers working together on such a small team is pretty rare, but has generated lots of great ideas because our perspectives on the problems are so different," Parness said.

The research has implications for extraterrestrial volcanoes. On both Earth and Mars, fissures are the most common physical features from which magma erupts. This is probably also true for the previously active volcanoes on the moon, Mercury, Enceladus and Europa, although the mechanism of volcanic eruption -- whether past or present -- on these other planetary bodies is unknown, Parcheta said.

"In the last few years, NASA spacecraft have sent back incredible pictures of caves, fissures and what look like volcanic vents on Mars and the moon. We don't have the technology yet to explore them, but they are so tantalizing! Working with Carolyn, we're trying to bridge that gap using volcanoes here on Earth for practice. We're learning about how volcanoes erupt here on Earth, too, and that has a lot of benefits in its own right," Parness said.

Parcheta, Parness, and JPL co-advisor Karl Mitchell first explored this idea last year using a two-wheeled robot they call VolcanoBot 1, with a length of 12 inches (30 centimeters) and 6.7-inch (17-centimeter) wheels. It is a spinoff of a different robot that Parness's laboratory developed, the Durable Reconnaissance and Observation Platform (DROP).

"We took that concept and redesigned it to work inside a volcano," Parcheta said.

For their experiments in May 2014, they had VolcanoBot 1 roll down a fissure - a crack that erupts magma - that is now inactive on the active Kilauea volcano in Hawaii.

Finding preserved and accessible fissures is rare. VolcanoBot 1 was tasked with mapping the pathways of magma from May 5 to 9, 2014. It was able to descend to depths of 82 feet (25 meters) in two locations on the fissure, although it could have gone deeper with a longer tether, as the bottom was not reached on either descent.

"In order to eventually understand how to predict eruptions and conduct hazard assessments, we need to understand how the magma is coming out of the ground. This is the first time we have been able to measure it directly, from the inside, to centimeter-scale accuracy," Parcheta said.

VolcanoBot 1 is enabling the researchers to put together a 3-D map of the fissure. They confirmed that bulges in the rock wall seen on the surface are also present deep in the ground, but the robot also found a surprise: The fissure did not appear to pinch shut, although VolcanoBot 1 didn't reach the bottom. The researchers want to return to the site and go even deeper to investigate further.

Specifically, Parcheta and Parness want to explore deeper inside Kilauea with a robot that has even stronger motors and electrical communications, so that more data can be sent back to the surface. They have responded to these challenges with the next iteration: VolcanoBot 2.

VolcanoBot 2 is smaller and lighter than its predecessor, at a length of 10 inches (25 centimeters). Its vision center can tip up and down, with the ability to turn and look at features around it.

"It has better mobility, stronger motors and smaller (5 inch, or 12 centimeter) wheels than the VolcanoBot 1. We've decreased the amount of cords that come up to the surface when it's in a volcano," Parcheta said.

While VolcanoBot 1 sent data to the surface directly from inside the fissure, data will be stored onboard VolcanoBot 2. VolcanoBot 2 has an electrical connection that is more secure and robust so that researchers can use the 3-D sensor's live video feed to navigate.

The team plans to test VolcanoBot 2 at Kilauea in early March.