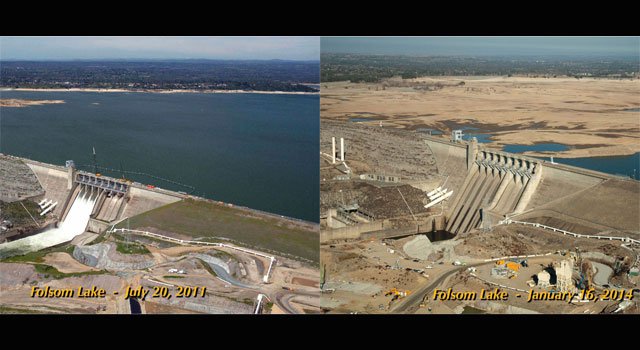 The severity of California's current drought is illustrated in these images of Folsom Lake, a reservoir in Northern California located 25 miles (40 kilometers) northeast of Sacramento.› Full image and caption
Credit: California Department of Water Resources 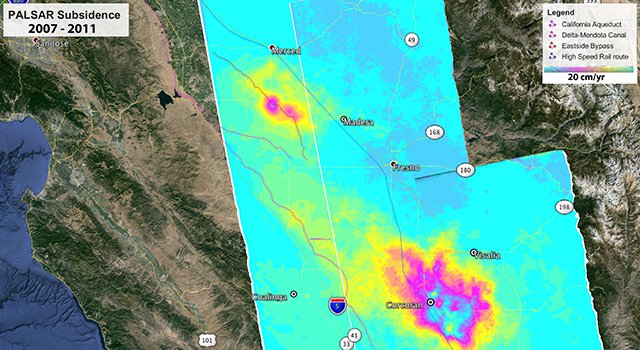 "Over the past two decades, NASA has developed capabilities to measure and provide useful information for all components of Earth's freshwater resources worldwide," said Michael Freilich, director of NASA's Earth Science Division in Washington. "Working with partners like DWR, we are leveraging NASA's unique Earth monitoring tools and science expertise to help managers address the state's water management challenges."

In January, Gov. Edmund G. Brown Jr. declared a drought state of emergency and directed state officials to take all necessary actions to prepare for water shortages as 2014 shapes up to be one of the driest years on record in California.

NASA and DWR began exploring opportunities to apply remote sensing data and research to the process of water resource management through a partnership established with funding from the 2009 American Recovery and Reinvestment Act. Ongoing collaborations include monitoring California delta levees; mapping fallowed agricultural lands; and improving estimates of precipitation, water stored in winter snowpack, and changes in groundwater resources. The agencies also are working to combine data from NASA satellites and DWR's network of agricultural weather stations to improve estimates of crop water requirements for California farmers seeking to better manage irrigation.

In April, NASA and DWR will resume flights of NASA's Airborne Snow Observatory to map the snowpack of the Tuolumne River Basin in the Sierra Nevada and the Uncompahgre watershed in the Upper Colorado River Basin. The Tuolumne watershed is the primary water supply for 2.6 million San Francisco Bay Area residents.

The airborne observatory measures how much water is in the snowpack and how much sunlight the snow absorbs, which affects how fast the snow melts. These data enable accurate estimates of how much water will flow out of a basin when the snow melts. Last year, observatory data helped water managers optimize reservoir filling and more efficiently allocate water between power generation, water supplies and ecological uses.

Another pilot project is demonstrating the feasibility of using satellite imagery to track the extent of fallowed land -- cultivated land intentionally allowed to lie idle during growing season -- in California's Central Valley. NASA is working with DWR, the U.S. Department of Agriculture, the U.S. Geological Survey (USGS) and California State University at Monterey Bay to establish an operational fallowed land monitoring service as part of a California drought early warning information system. New methods using time-series of crop data from NASA and USGS satellites can provide information on land fallowing and reductions in planted acreage early in the year. The team is preparing to produce data and maps of fallowed acreage in the Central Valley beginning this April to help monitor the impacts of the ongoing drought.

Faced with an inability to fully irrigate their crops due to drought, Central Valley farmers often must prioritize use of limited available water supplies to sustain perennial crops. Taking land out of production reduces farm income and agricultural sales and increases unemployment. Timely and accurate knowledge of the extent of fallowing can give decision makers vital insights into the severity of drought impacts and provide a basis for sound drought response decisions.

Another NASA project mapped areas of subsidence, or ground sinking, in the San Joaquin Valley from 2007 to 2011 caused by decreased groundwater levels. Groundwater is increasingly important in water resource management, yet knowledge of groundwater levels is not uniformly available. Satellite-based and airborne interferometric synthetic aperture radar can monitor groundwater levels by measuring surface deformation due to the withdrawal and recharge of aquifers.

Satellite radar maps produced to date reveal significant areas of subsidence. NASA produced regional maps of the rate and total amount of subsidence, along with animations and detailed histories of individual locations that can help researchers deduce year-to-year changes in groundwater storage. Researchers hope to extend the data to the present day to give state water managers updates on how subsidence has progressed during the drought and detect possible new areas of concern. The data can be used to focus on problem areas where too much water is being pumped. The maps also help managers of infrastructure that can be affected by subsidence, such as aqueducts, flood-control channels and the California High-Speed Rail Authority.

NASA is teaming with DWR, University of California at San Diego and others to conduct airborne campaigns, satellite studies and analyses of weather and climate models to enhance understanding and improve forecasts of atmospheric rivers. These narrow, low-altitude, elongated corridors of water vapor account for most major flooding events, provide about 40 percent of California's freshwater, and often are "drought busters." They help scientists understand and predict the global water cycle and its regional extremes.

NASA satellite data and modeling studies have contributed to a better description and understanding of the Madden-Julian Oscillation, a recurring pattern of tropical weather and climate that impacts weather in Earth's mid-latitudes, including California. Weather forecast models now demonstrate the ability to forecast this pattern as much as four weeks in advance, potentially providing new, long-lead precipitation forecast information for California. The NASA team is working with the global weather and climate forecast communities to enable and improve routine forecasts of this phenomenon.

Three of the five new Earth science missions NASA is scheduled to launch this year will contribute to water cycle research and water-related national policy decisions.

ISS-RapidScat, scheduled to launch to the International Space Station (ISS) in June, will extend the data record of ocean winds around the globe. The data are a key factor in climate research, weather and marine forecasting and tracking of storms and hurricanes.