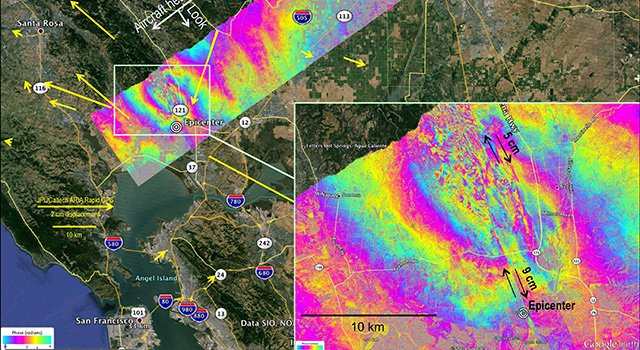 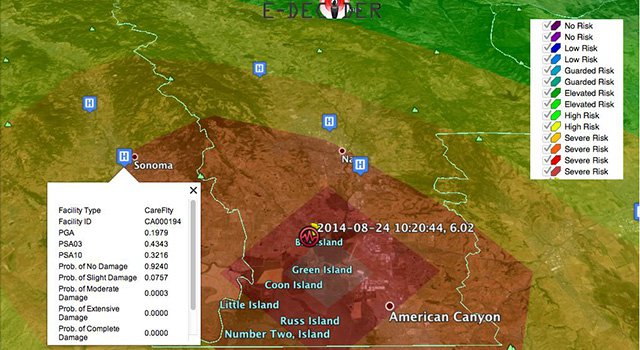 A strain magnitude map of the Aug. 24, 2014 Napa California quake, developed under NASA's E-DECIDER disaster decision support system. The map, which highlights areas where the greatest ground deformation has occurred based on a fault model, was given to state officials to assist response efforts.› Full image and caption
Credit: NASA/JPL-Caltech/ImageCat/Indiana University/UC Davis 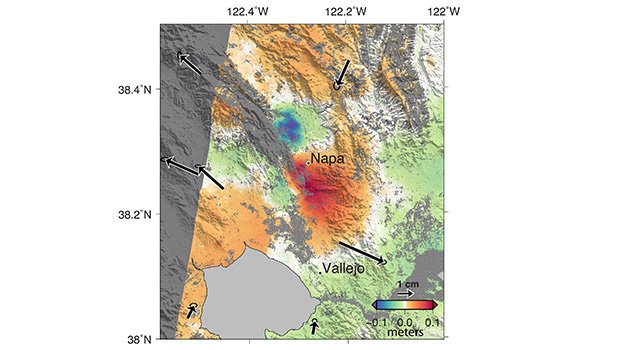 NASA data and expertise are proving invaluable in California's ongoing response to the Aug. 24 magnitude 6.0 earthquake in Napa Valley, northeast of San Francisco.

NASA data and expertise are proving invaluable in California's ongoing response to the Aug. 24 magnitude 6.0 earthquake in Napa Valley, northeast of San Francisco. The quake was the strongest to occur in the San Francisco Bay Area in a quarter-century and caused significant regional damage.

Analyses by scientists at NASA's Jet Propulsion Laboratory, Pasadena, California, of airborne data from NASA's Uninhabited Aerial Vehicle Synthetic Aperture Radar (UAVSAR), GPS data and radar imagery from the Italian Space Agency's COSMO-SkyMed satellites, are revealing important details of how the ground deformed in the region and the nature of the fault movements. In addition, a NASA-funded disaster decision support system has provided a series of rapid-response data maps to decision makers at the California Earthquake Clearinghouse. Those maps are being used to better direct response efforts.

NASA has been monitoring active earthquake faults in California using a variety of remote sensing and ground-based techniques. The JPL-developed UAVSAR, in use since 2009, is an L-band Interferometric Synthetic Aperture Radar instrument that flies mounted underneath a NASA C-20A Earth science research aircraft from NASA's Armstrong Flight Research Center, Edwards, California. UAVSAR is able to detect minute changes in Earth's surface that occur over time between flights of the instrument. UAVSAR has monitored the Napa area about every six months since November 2009.

A comparison of UAVSAR data collected on May 29, 2014, three months before the quake, and on Aug. 29, 2014, five days after the quake, reveals that multiple strands of the fault slipped near the quake's epicenter. A new UAVSAR image showing these changes is available at:

The image colors represent the amount of ground motion between the two flights in the direction from a point on the ground to the instrument, which flies at an altitude of 41,000 feet (12,497 meters). Preliminary results indicate several inches/centimeters of horizontal slip occurred on the various strands of the fault.

Further UAVSAR data analyses will reveal how deep beneath Earth's surface the faults slipped and the amount of the slip. Initial GPS analyses, shown in the image by the yellow arrows, indicate an average slip of nearly 23.6 inches (60 centimeters) along a 9.3-mile-long (15-kilometer) fault. That is equivalent to a magnitude 6.1 earthquake. This suggests that the strands of the fault continued to slip after the main earthquake, but did not produce any large aftershocks.

The Aug. 29 UAVSAR flight was conducted to assess if the earthquake damaged any of the water conveyance infrastructure of the Sacramento Delta. By Aug. 31, UAVSAR data of ground movement along the San Pablo Bay shoreline were in the hands of the California Department of Water Resources, who used it to assess levee and aqueduct damage in support of their emergency response activities. It was also provided to the United States Geological Survey to direct their ground survey crews.

"NASA's UAVSAR radar imagery of the magnitude 6.0 Napa earthquake is being widely used to identify fault slip across the full Napa fault zone for the scientific, engineering and damage assessment communities and may result in the most comprehensive fault map ever produced for an earthquake in the United States," said Gerald Bawden, program scientist at NASA Headquarters, Washington.

JPL scientists, in collaboration with the Italian Space Agency's (ASI) Center for the Interpretation of Earth Observation Data and the Universita degli studi della Basilicata, also analyzed interferometric synthetic aperture radar images from ASI's COSMO-SkyMed satellites to calculate a map of the deformation of Earth's surface caused by the quake. The deformation is shown in a new false-color map that has been combined with shaded relief topography in gray. A pair of new maps created from these data can be viewed at:

The colors in the top map indicate the amount of permanent surface movement that occurred almost entirely due to the quake, as viewed by the satellite, during a one-month interval between two COSMO-SkyMed images acquired on July 26 and Aug. 27, 2014. Scientists use these maps to build detailed models of the fault and associated land movements to better understand the impact on future earthquake activity.

The second radar map is based on the same data as the first map, but highlights very small-scale ground deformation and evidence of the fault rupture visible on Earth's surface. The inset map shows a close-up of the color cycles, revealing a discontinuity in the color cycles that identifies a potential fault rupture cutting through the Napa County Airport. United States Geological Survey and California Geological Survey field crews investigated this feature and were able to verify that the fault did break Earth's surface at this location, along a previously unidentified fault rupture.

They include an aftershock forecast map that highlights where aftershocks are likely to occur; a strain magnitude map that highlights areas where the greatest ground deformation has occurred based on a fault model; and InLET (Internet Loss Estimation Tool), which provides immediate post-event estimates of casualties and building damage for planning purposes and early response after an earthquake before more detailed data become available.

For more on the UAVSAR Napa earthquake studies, visit:

The NASA UAVSAR project serves as a technology and applications testbed for a NASA spaceborne L-band synthetic aperture radar mission now under formulation. When launched, this mission would extend the UAVSAR regional capability to a global scope. More information on this mission can be found at: