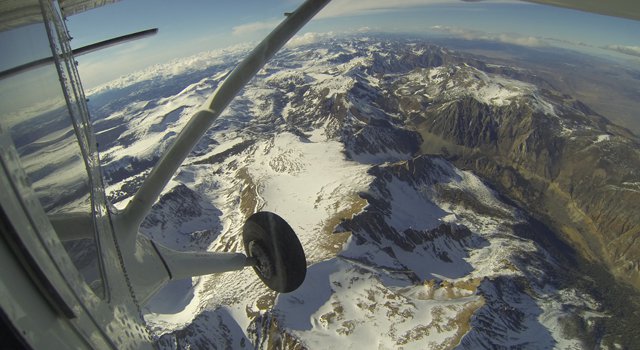 Mt. Dana and Dana Plateau in the Tuolumne River Basin within Yosemite National Park, Calif., as seen out the window of a Twin Otter aircraft carrying NASA's Airborne Snow Observatory on April 3, 2013. The patchy snow cover this early in the snowmelt season is a reflection of the poor snowfall in the Sierra Nevada this winter and spring. The Airborne Snow Observatory is producing comprehensive weekly maps of how much water this basin holds, data that will be used to estimate how much water will flow out of the basins when the snow melts. The watershed and its Hetch Hetchy Reservoir are the primary water supply for San Francisco.
Credit: NASA/JPL-Caltech 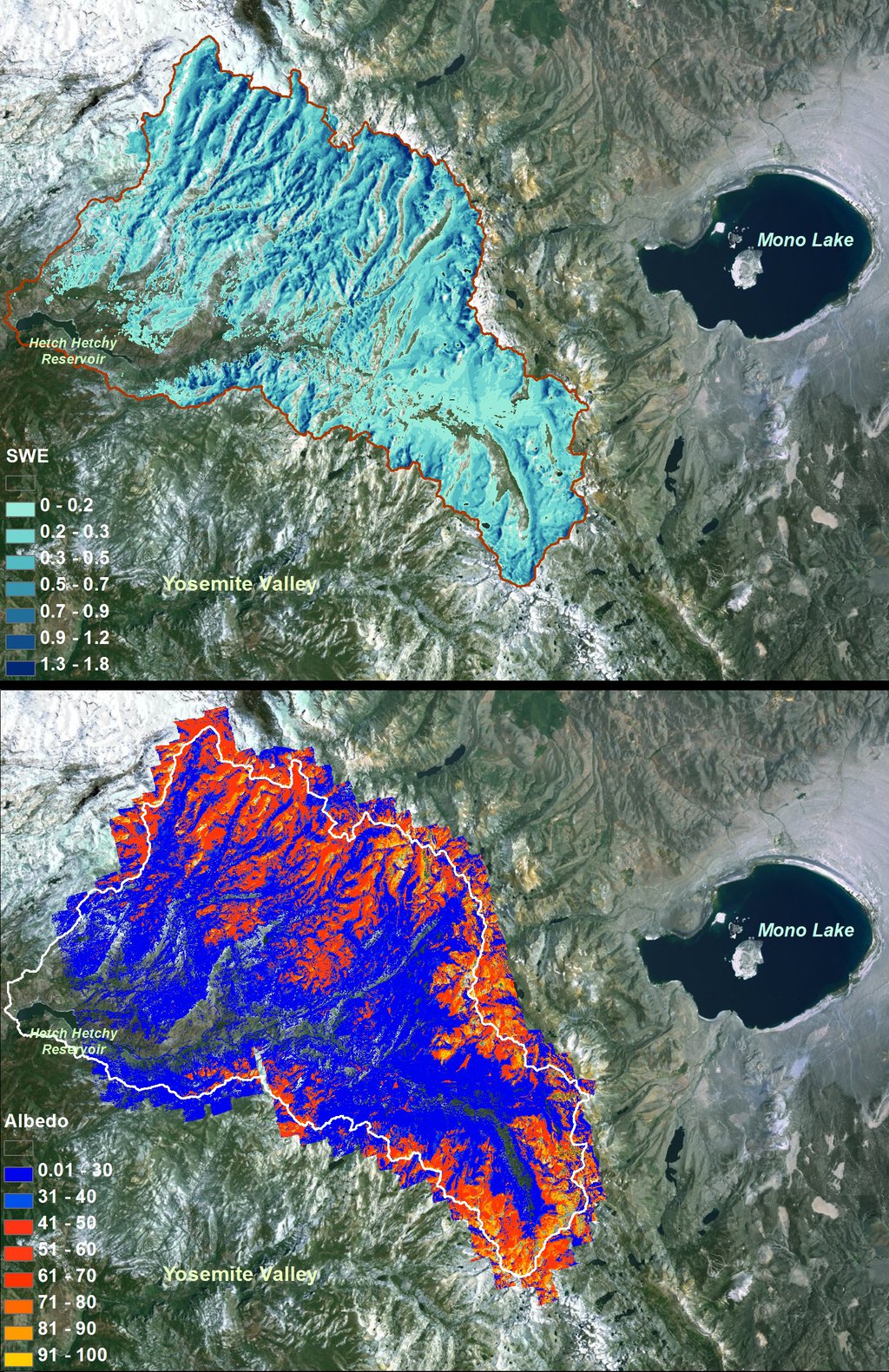 NASA Airborne Snow Observatory measurements of snow water equivalent (top image) and snow albedo, or reflectivity (bottom image) for the Tuolumne River Basin in California's Sierra Nevada on April 21, 2013. The snow water equivalent measured the total water contained as snow in the basin on that date at 375 million cubic meters, or enough to fill the Rose Bowl about 1,180 times. The albedo map expresses the percentage of sunlight reflected back to space by the snow. The lower the albedo, the faster the snowmelt rate and runoff.
Credit: NASA/JPL-Caltech 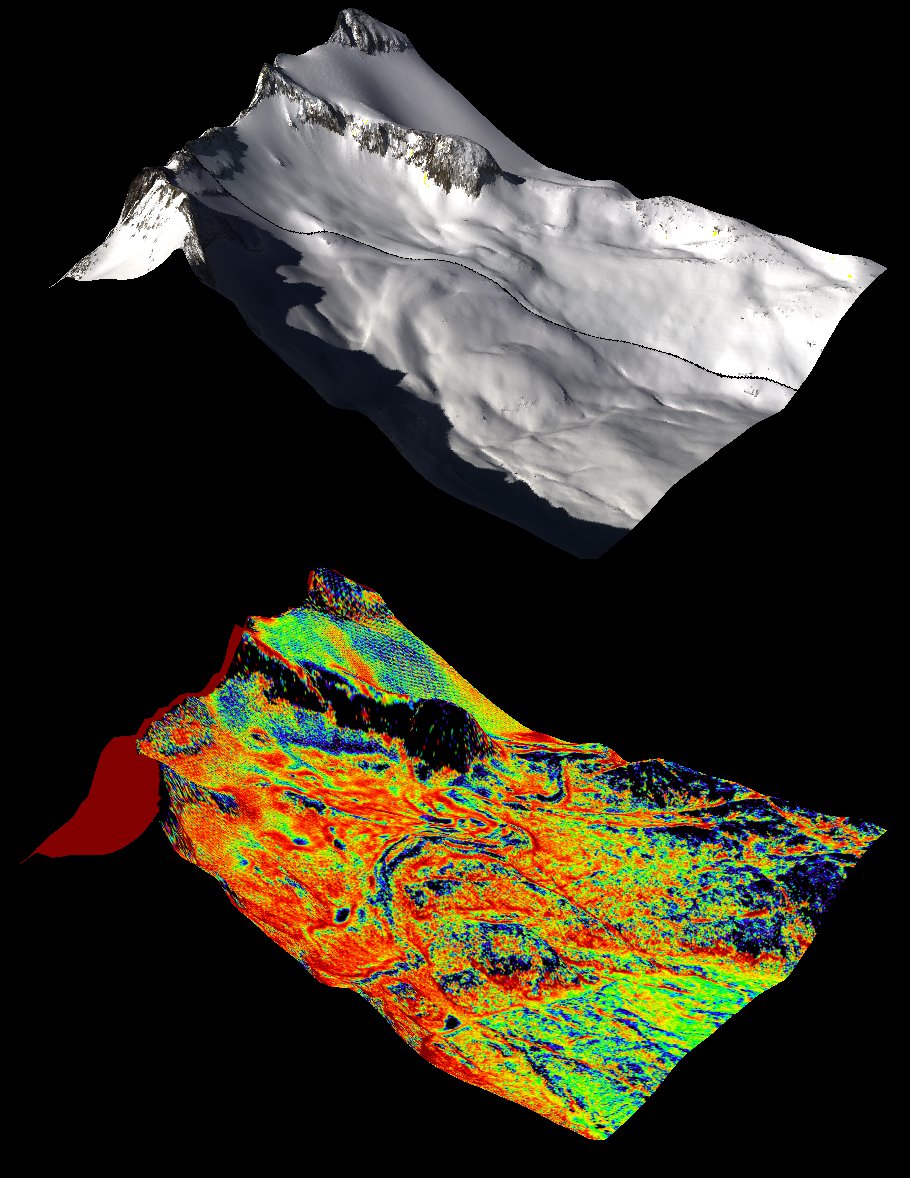 A natural color image of Mt. Lyell, the highest point in the Tuolumne River Basin (top image) is compared with a three-dimensional color composite image of Mt. Lyell from NASA's Airborne Snow Observatory depicting snow depth (bottom image). Mt. Lyell holds the Lyell glacier, which has been in sustained retreat since the 1800s.
Credit: NASA JPL/Caltech

A new NASA airborne mission is producing the most accurate measurements to date of how much water is in the snowpack of two mountain watersheds in California and Colorado.

PASADENA, Calif. - A new NASA airborne mission has created the first maps of the entire snowpack of two major mountain watersheds in California and Colorado, producing the most accurate measurements to date of how much water they hold.

The data from NASA's Airborne Snow Observatory mission will be used to estimate how much water will flow out of the basins when the snow melts. The data-gathering technology could improve water management for 1.5 billion people worldwide who rely on snowmelt for their water supply.

"The Airborne Snow Observatory is on the cutting edge of snow remote-sensing science," said Jared Entin, a program manager in the Earth Science Division at NASA Headquarters in Washington. "Decision makers like power companies and water managers now are receiving these data, which may have immediate economic benefits."

The mission is a collaboration between NASA's Jet Propulsion Laboratory, Pasadena, Calif., and the California Department of Water Resources in Sacramento.

A Twin Otter aircraft carrying NASA's Airborne Snow Observatory began a three-year demonstration mission in April that includes weekly flights over the Tuolumne River Basin in California's Sierra Nevada and monthly flights over Colorado's Uncompahgre River Basin. The flights will run through the end of the snowmelt season, which typically occurs in July. The Tuolumne watershed and its Hetch Hetchy Reservoir are the primary water supply for 2.6 million San Francisco Bay Area residents. The Uncompahgre watershed is part of the Upper Colorado River Basin that supplies water to much of the western United States.

The mission's principal investigator, Tom Painter of JPL, said the mission fills a critical need in an increasingly thirsty world, initially focusing on the western United States, where snowmelt provides more than 75 percent of the total freshwater supply.

"Changes in and pressure on snowmelt-dependent water systems are motivating water managers, governments and others to improve understanding of snow and its melt," Painter said. "The western United States and other regions face significant water resource challenges because of population growth and faster melt and runoff of snowpacks caused by climate change. NASA's Airborne Snow Observatory combines the best available technologies to provide precise, timely information for assessing snowpack volume and melt."

The observatory's two instruments measure two properties most critical to understanding snowmelt runoff and timing. Those two properties had been mostly unmeasured until now.

An imaging spectrometer built by another Canadian concern, ITRES of Calgary, Alberta, measures the second property, snow albedo. Snow albedo represents the amount of sunlight reflected and absorbed by snow. Snow albedo controls the speed of snowmelt and timing of its runoff.

By combining these data, scientists can tell how changes in the absorption of sunlight cause snowmelt rates to increase.

The Airborne Snow Observatory flies at an altitude of 17,500 to 22,000 feet (5,334 to 6,705 meters) to produce frequent maps that scientists can use to monitor changes over time. It can calculate snow depth to within about 4 inches (10 centimeters) and snow water equivalent to within five percent. Data are processed on the ground and made available to participating water managers within 24 hours.

Before now, Sierra Nevada snow water equivalent estimates have been extrapolated from monthly manual ground snow surveys conducted from January through April. These survey sites are sparsely located, primarily in lower to middle elevations that melt free of snow each spring, while snow remains at higher elevations. Water managers use these survey data to forecast annual water supplies. The information affects decisions by local water districts, agricultural interests and others. The sparse sampling can lead to large errors. In contrast, the NASA observatory can map all the snow throughout the entire snowmelt season.

"We believe this is the future of water management in the western United States," he said.