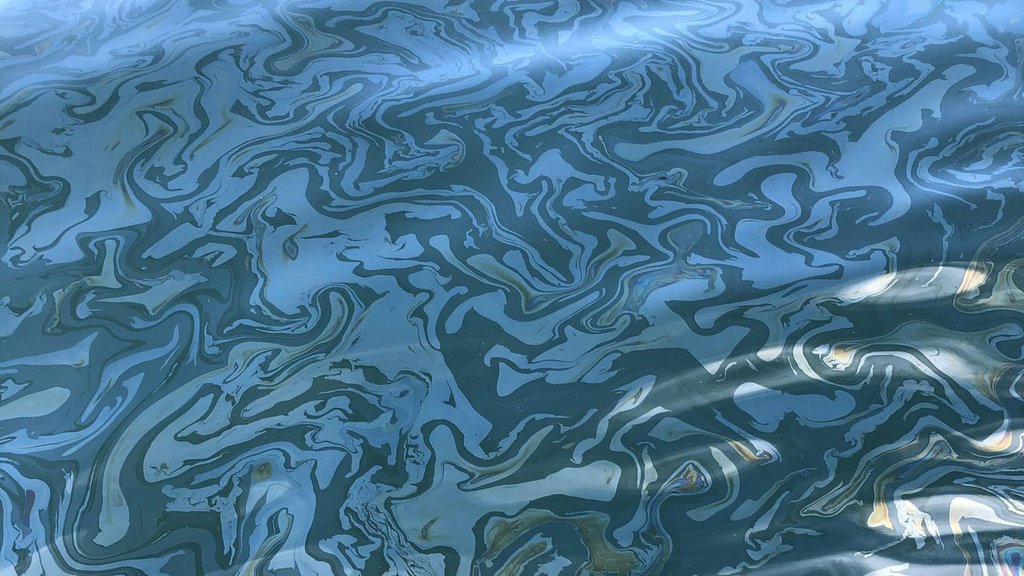 An oil slick from naturally occurring oil seeps off the coast of Santa Barbara, California. The Marine Oil Spill Thickness (MOST) project is using these natural seeps to test technology that can detect the thickest oil in a slick during an oil spill emergency. Credit: NASA/JPL-Caltech Full Image Details 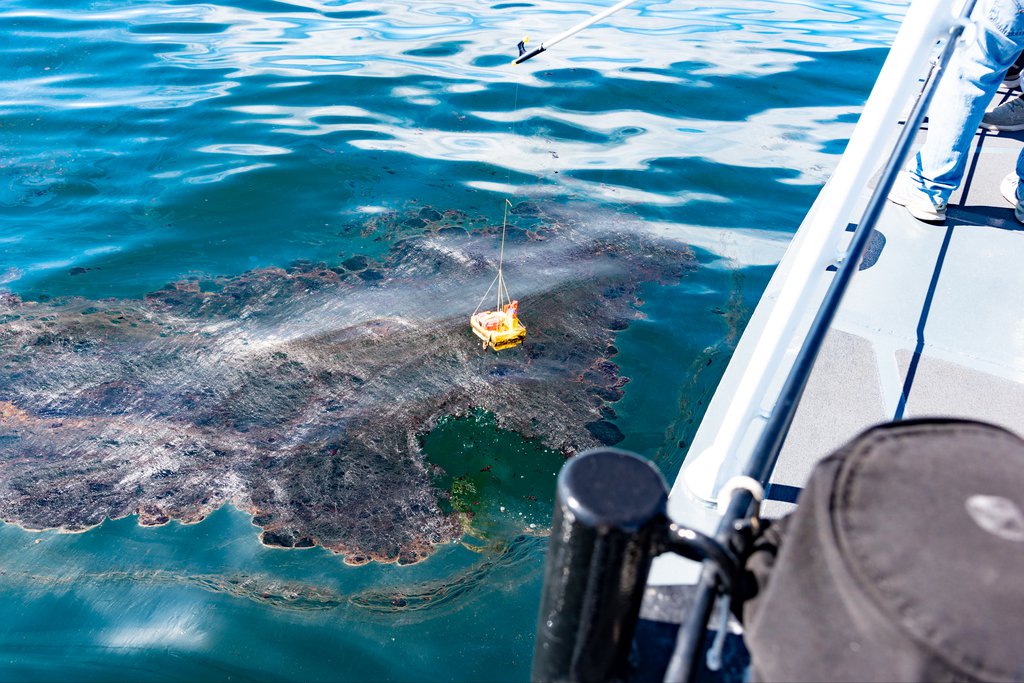 The Marine Oil Spill Thickness (MOST) project collects measurements of oil thickness in a naturally occurring oil seep off the coast of Santa Barbara, California. The measurements will be used to validate remote sensing data measurements and eventually, in a system to aid in oil spill response.

NASA and National Oceanic and Atmospheric Administration scientists are teaming up to test remote sensing technology for use in oil spill response.

Just off the coast of Santa Barbara, California, thousands of gallons of oil seep through cracks in the seafloor and rise to the surface each day. But this isn’t a disaster zone: It’s one of the largest naturally occurring oil seeps in the world and is believed to have been active for thousands of years.

The reliability of these seeps makes the area an important natural laboratory for scientists, including those with the Marine Oil Spill Thickness (MOST) project, a collaboration between NASA and the National Oceanic and Atmospheric Administration (NOAA) to generate operational automated oil spill detection, oil extent geospatial mapping analytics, and oil thickness characterization applications.

The MOST team is working to develop a way for NOAA – the lead federal agency for detecting and tracking coastal oil spills – to use remote sensing data to determine not just where oil is, but where the thickest parts are, one of the critical missing pieces to direct response and remediation activities. The team recently concluded a fall field campaign in Santa Barbara.

“We’re using a radar instrument called UAVSAR to characterize the thickness of the oil within an oil slick,” said Cathleen Jones, MOST co-investigator at NASA’s Jet Propulsion Laboratory in Southern California. “This thicker oil stays in the environment longer and damages marine life more than thin oil. And if you know where it is, you can direct responders to those problematic areas.”

NASA’s UAVSAR, or Uninhabited Aerial Vehicle Synthetic Aperture Radar, attaches to the fuselage of an airplane that collects a roughly 12-mile-wide (19-kilometer-wide) image of an area.

But SAR images are unlike those acquired from other sensors. The instrument sends radar pulses down to the surface of the ocean, and the signals that bounce back are used to detect roughness, caused by waves, at the ocean’s surface. When oil is present, it dampens the waves, creating areas of smoother water. These smooth, oily areas appear darker than the surrounding clean water in the SAR imagery – the thicker the oil, the darker the area will appear.

The airborne observations must then be validated, meaning the scientists have to go to the same area on a boat to measure the thickness of the oil by hand.

“We put the sampler, which is like a tube that’s open on both ends, in the water and let it sit there for a moment,” said Ben Holt, also a JPL co-investigator for MOST. “And then when you close off the tube, a small layer of oil and water is collected. After the oil layer settles, you can measure the oil layer thickness and compare that with the UAVSAR observations to see how closely they match up.”

As another key layer of validation, the ship deploys a drone carrying an optical sensor, which is capable of observing the slick and measuring its thickness over a broader area than can be observed from the ship.

With the MOST project, NASA and NOAA are testing radar technology to measure oil thickness in marine oil spills. The thickest oil in an oil slick is the most environmentally harmful. MOST’s goal is to develop a prototype system to help responders locate this oil during a spill so they can direct clean-up efforts to those areas.

How MOST Was Born

Initially, UAVSAR seemed an unlikely candidate to track or characterize oil. It was developed to measure changes to Earth’s surface – for instance, after an earthquake or volcanic eruption. But during the 2010 Deepwater Horizon oil spill in the Gulf of Mexico, Elijah Ramsey, a scientist with the U.S. Geological Survey, reached out to Jones about trying to use the instrument to identify the oil coming ashore in Louisiana.

“The indications were that it wouldn’t work because the instrument uses too long of a wavelength for that purpose,” Jones said. “But we said, ‘Let’s try it anyway.’”

She and Holt were glad they did.

“It was just incredible what you could see with UAVSAR because it is so much more sensitive than satellite-based instruments,” Jones said. UAVSAR is more sensitive to low returns from oil covered areas than typical satellite SAR instruments. So we were able to identify the oil and to calculate the oil concentrations present.”

Their findings were a proof of concept and were published in 2012. In subsequent years, the feasibility of scaling this innovation for further risk analysis and assessment has been examined.

In 2018, Frank Monaldo, a scientist at the University of Maryland who had worked with NOAA for many years, partnered with Jones, Holt, and a team from NOAA, the U.S. Coast Guard, and the private sector, in addition to researchers in Canada and Norway, to formulate the MOST proposal. In 2019, NASA’s Disasters program selected this concept for implementation to reduce disaster risk and strengthen resilience, and the four-year MOST project was launched.

As the MOST team was preparing to head out for their fall field campaign, scheduled to kick off the first Monday in October, authorities were responding to reports of an oil spill off the coast of Huntington Beach, California – just 130 miles (209 kilometers) south of the Santa Barbara field campaign location.

Several members of the MOST team quickly became involved with providing data on the spill. What was supposed to have been a practice campaign in controlled circumstances quickly became a real-world test of UAVSAR’s utility during an actual oil spill emergency.

“It was really different from doing a practice run because people were overwhelmed running the response,” Jones said. “But when NOAA got the UAVSAR data, they used it to delineate oil, and then they released a Marine Pollution Surveillance Report based on it. It was the first time that had ever been done using data from an airborne instrument,” she said.

While UAVSAR proved valuable in this situation, the deployment couldn’t replace the field campaign for scientific purposes, because they were unable to take measurements by boat. “We really had no in-situ measurements for comparison,” said Holt. “The real value was the efforts by Cathleen and other members of the UAVSAR team to get the UAVSAR data processed and uploaded and then utilized by NOAA.”

Although UAVSAR’s capabilities in oil spill thickness detection are useful, flying an airplane over every oil slick isn’t practical. So once the data from the spring and fall field campaigns is validated, it’ll be used to train algorithms to calculate oil thickness from SAR data automatically.

UAVSAR is a prototype for an upcoming satellite mission called NASA-ISRO Synthetic Aperture Radar, or NISAR, which is a partnership between NASA and the Indian Space Research Organisation (ISRO). If all goes according to plan, the methods and algorithms developed during the MOST project can be applied to data from the new mission, as well.

“The idea here is that in two years or so when the MOST project is over, we’ll have a prototype system for detecting oil thickness that NOAA can use and distribute during oil spill response,” said Jones. “With NASA partnering with NOAA, we can transfer this information to those who can use it practically.”