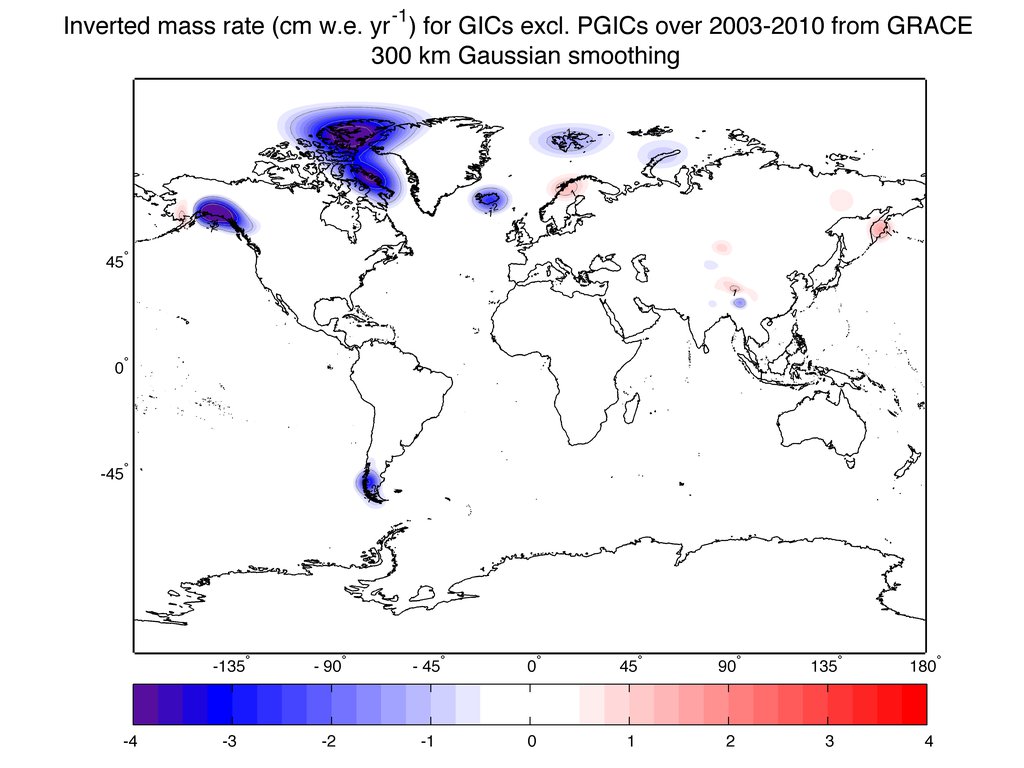 Changes in ice thickness (in centimeters per year) during 2003-2010 as measured by NASA's Gravity Recovery and Climate Experiment (GRACE) satellites, averaged over each of the world's ice caps and glacier systems outside of Greenland and Antarctica.› Full image and caption
Credit: NASA/JPL-Caltech/University of Colorado 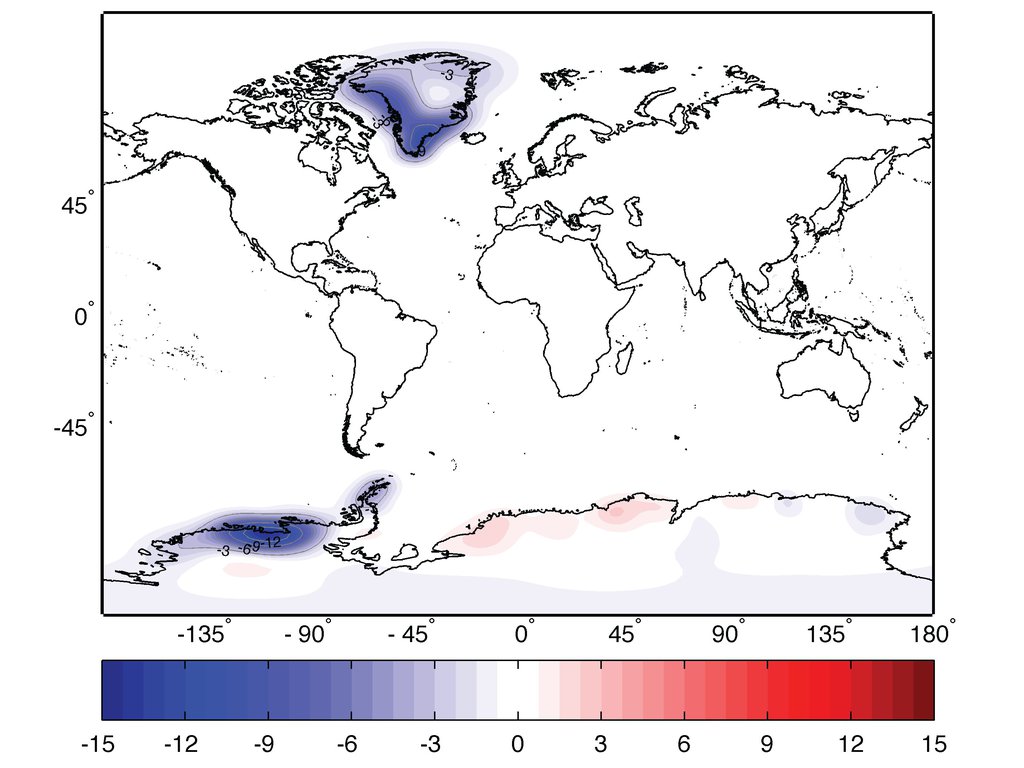 Average yearly change in mass, in centimeters of water, during 2003-2010, as measured by NASA's Gravity Recovery and Climate Experiment (GRACE) satellites, for just Greenland and Antarctica and their peripheral glaciers and ice caps.› Full image and caption
Credit: NASA/JPL-Caltech/University of Colorado 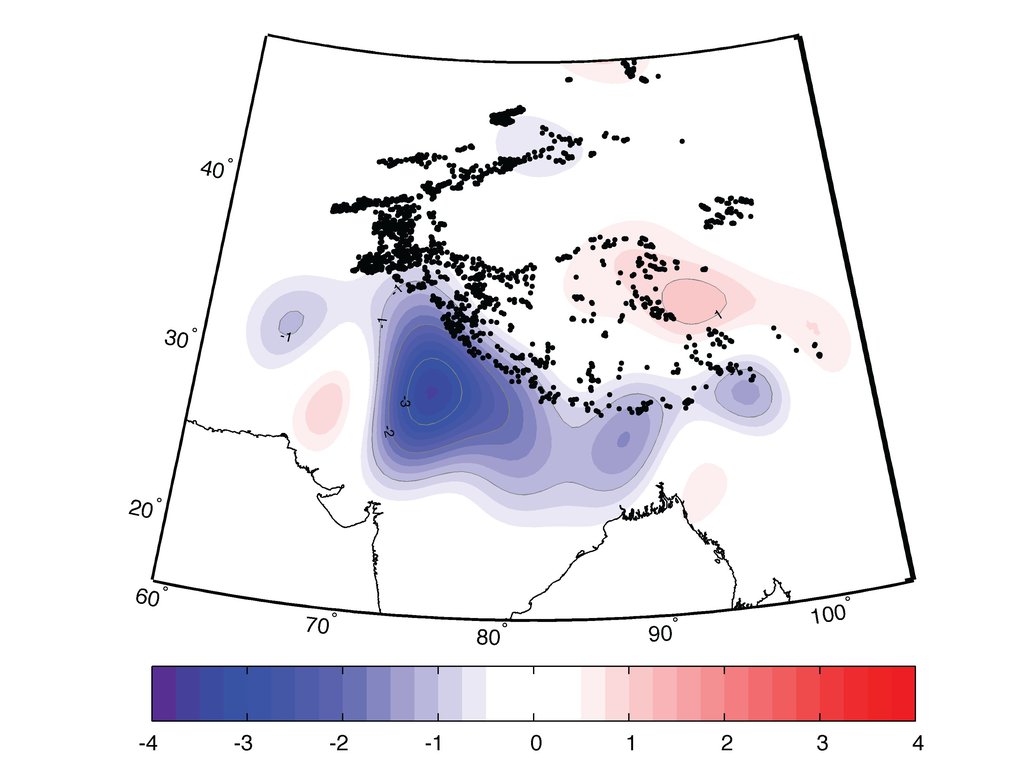 Changes in ice thickness (in centimeters per year) during 2003-2010 as measured by NASA's Gravity Recovery and Climate Experiment (GRACE) satellites, averaged over each of the world's ice caps and glacier systems outside of Greenland and Antarctica. Blue represents ice mass loss, while red represents ice mass gain.› Full image and caption
Credit: NASA/JPL-Caltech/University of Colorado 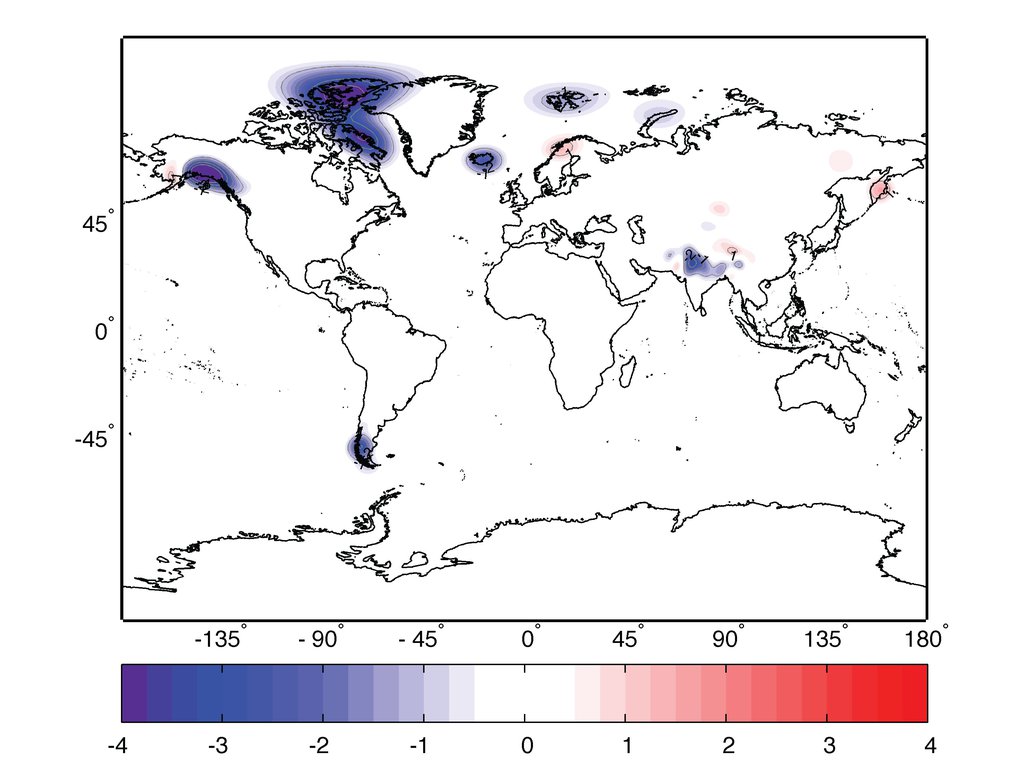 Average yearly change in mass, in centimeters of water, during 2003-2010, as measured by NASA's Gravity Recovery and Climate Experiment (GRACE) satellites, for all the world's glaciers and ice caps (excluding Greenland and Antarctica), and for the plains across northern India and adjacent regions.› Full image and caption
Credit: NASA/JPL-Caltech/University of Colorado

PASADENA, Calif. - In the first comprehensive satellite study of its kind, a University of Colorado at Boulder-led team used NASA data to calculate how much Earth's melting land ice is adding to global sea level rise.

Using satellite measurements from the NASA/German Aerospace Center Gravity Recovery and Climate Experiment (GRACE), the researchers measured ice loss in all of Earth's land ice between 2003 and 2010, with particular emphasis on glaciers and ice caps outside of Greenland and Antarctica.

"Earth is losing a huge amount of ice to the ocean annually, and these new results will help us answer important questions in terms of both sea rise and how the planet's cold regions are responding to global change," said University of Colorado Boulder physics professor John Wahr, who helped lead the study. "The strength of GRACE is it sees all the mass in the system, even though its resolution is not high enough to allow us to determine separate contributions from each individual glacier."

About a quarter of the average annual ice loss came from glaciers and ice caps outside of Greenland and Antarctica (roughly 148 billion tons, or 39 cubic miles). Ice loss from Greenland and Antarctica and their peripheral ice caps and glaciers averaged 385 billion tons (100 cubic miles) a year. Results of the study will be published online Feb. 8 in the journal Nature.

Traditional estimates of Earth's ice caps and glaciers have been made using ground measurements from relatively few glaciers to infer what all the world's unmonitored glaciers were doing. Only a few hundred of the roughly 200,000 glaciers worldwide have been monitored for longer than a decade.

"The GRACE results in this region really were a surprise," said Wahr, who is also a fellow at the University of Colorado-headquartered Cooperative Institute for Research in Environmental Sciences. "One possible explanation is that previous estimates were based on measurements taken primarily from some of the lower, more accessible glaciers in Asia and extrapolated to infer the behavior of higher glaciers. But unlike the lower glaciers, most of the high glaciers are located in very cold environments and require greater amounts of atmospheric warming before local temperatures rise enough to cause significant melting. This makes it difficult to use low-elevation, ground-based measurements to estimate results from the entire system."

"This study finds that the world's small glaciers and ice caps in places like Alaska, South America and the Himalayas contribute about 0.02 inches per year to sea level rise," said Tom Wagner, cryosphere program scientist at NASA Headquarters in Washington. "While this is lower than previous estimates, it confirms that ice is being lost from around the globe, with just a few areas in precarious balance. The results sharpen our view of land-ice melting, which poses the biggest, most threatening factor in future sea level rise."

The twin GRACE satellites track changes in Earth's gravity field by noting minute changes in gravitational pull caused by regional variations in Earth's mass, which for periods of months to years is typically because of movements of water on Earth's surface. It does this by measuring changes in the distance between its two identical spacecraft to one-hundredth the width of a human hair.

The GRACE spacecraft, developed by NASA's Jet Propulsion Laboratory, Pasadena, Calif., and launched in 2002, are in the same orbit approximately 137 miles (220 kilometers) apart.  The California Institute of Technology manages JPL for NASA.