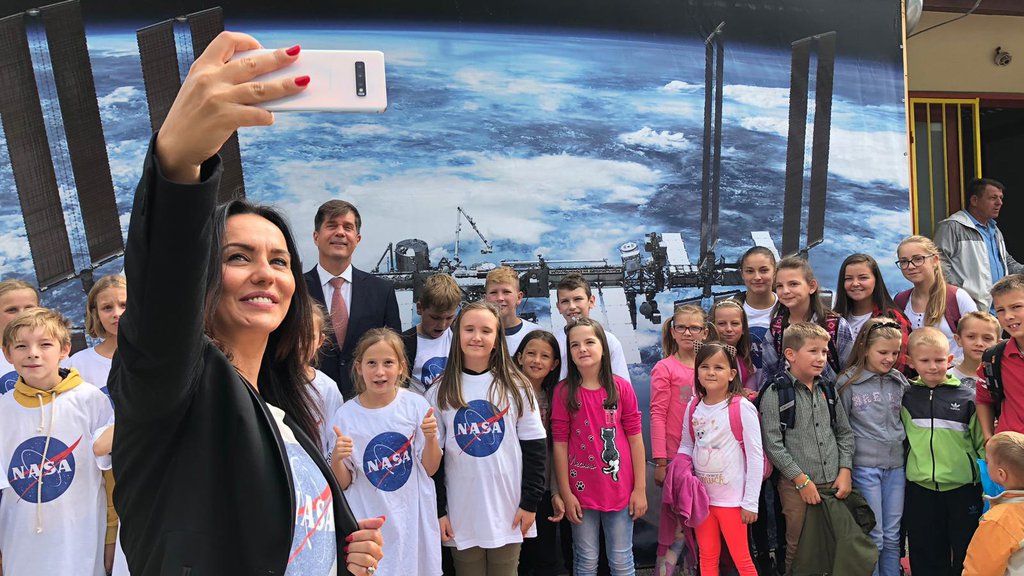 On Sept. 23, 2019, Eric Nelson, the U.S. Ambassador to Bosnia and Herzegovina, presented a framed letter to the Snezana Ruzucic, mayor of the Balkan municipality of Jezero. The letter, from NASA's director of Mars Exploration, James Watzin, honored the connection between the small Balkan town and Jezero Crater the landing site of NASA's upcoming Mars 2020 mission. In this picture, Ruzucic snaps a selfie of the ambassador with local school children.› Full image and caption
Credit: US Embassy Sarajevo 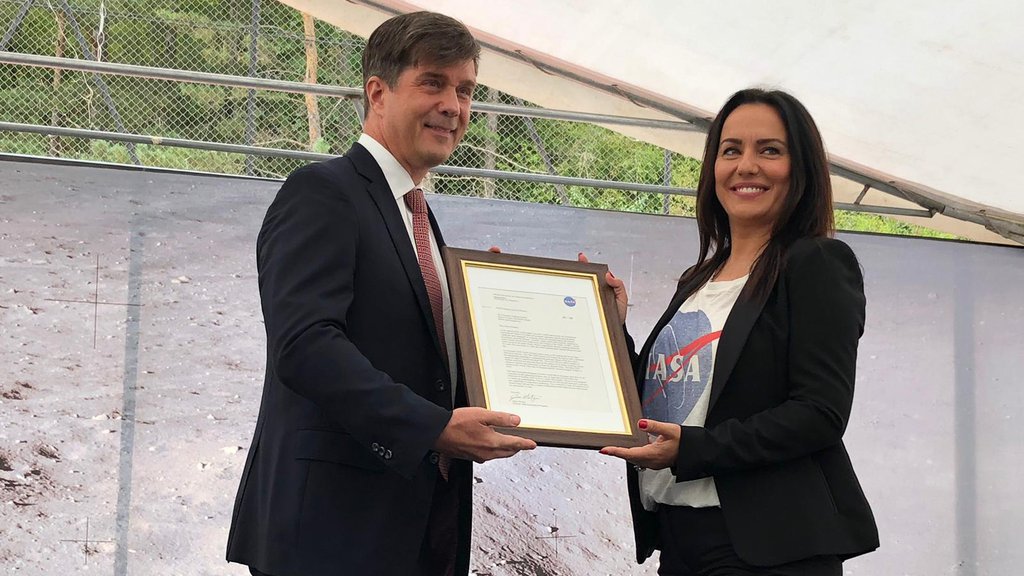 Eric Nelson, the U.S. Ambassador to Bosnia and Herzegovina, presents a framed letter to the Snezana Ruzucic, mayor of the Balkan municipality of Jezero. The letter, from NASA's director of Mars Exploration, James Watzin, honored the connection between the small Balkan town and Jezero Crater the landing site of NASA's upcoming Mars 2020 mission.› Full image and caption
Credit: U.S. Embassy Sarajevo 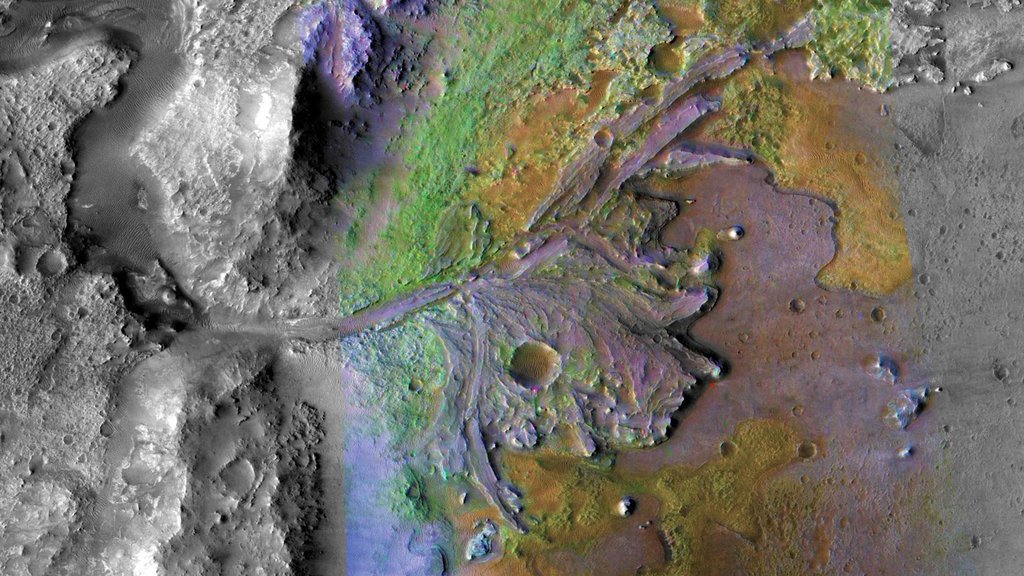 This image is of Jezero Crater on Mars, the landing site for NASA's Mars 2020 mission. It was taken by instruments on NASA's Mars Reconnaissance Orbiter (MRO), which regularly takes images of potential landing sites for future missions.› Full image and caption
Credit: NASA/JPL-Caltech/MSSS/JHU-APL

A letter from NASA was presented to the mayor of Jezero, Bosnia-Herzegovina, honoring the connection between the town and Jezero Crater, the Mars 2020 rover landing site.

Today, a letter from NASA's director of Mars Exploration, James Watzin, was presented to the mayor of Jezero, Bosnia and Herzegovina, honoring the connection between the small Balkan town and Jezero Crater, the landing site for the Mars 2020 rover. U.S. Ambassador Eric Nelson delivered the letter to Mayor Snezana Ruzucic in the town, population 1,100.

"It takes an international team of experts to create and support a mission with the complexity and ambition of Mars 2020," said Watzin. "I am proud that we can now include the citizens of Jezero, Bosnia and Herzegovina, as honorary members of the 2020 team. Together, we will explore one of the most scientifically captivating as well as serene locations on Mars."

The linkage between Mars and the municipality of Jezero began with a decision by the International Astronomical Union (IAU) in 2007: That's when the organization gave the name Jezero Crater to a 28-mile-wide (45-kilometer-wide) crater on the western edge of Isidis Planitia, a giant impact basin just north of the Martian equator.

"The IAU choses to name craters with scientific significance after small towns and villages of the world," explained Ken Farley, project scientist for Mars 2020 from Caltech in Pasadena, California.

"I couldn't be happier with both our future home on Mars and the location it was named after," said Farley.

Jezero township is situated on the Veliko Plivsko Lake entrance to the Pliva River. Like its Earthly namesake, the Red Planet's Jezero Crater was once home to a river-fed lake. Mars 2020 scientists believe this ancient river delta could have collected and preserved organic molecules and other potential signs of microbial life from the water and sediments that flowed into the crater billions of years ago. The mission plans to take samples of the area, caching them in tubes that will be retrieved and returned to Earth in a future mission.

Watzin elaborated in his letter to the people of Jezero:

"The Mars Exploration Program at NASA would like to recognize your town for its connection to this upcoming mission, and we hope that you will follow the endeavors of the Mars 2020 rover as it makes this journey. The rover was designed to further our understanding of the possibilities for life beyond Earth and to advance new capabilities in exploration technology. Once returned to Earth, the samples from Jezero Crater will provide a wealth of information about Mars and our solar system for generations to come."

Watzin is confident the thrill of exploration and discovery can extend the tens of millions of miles from an intriguing crater on Mars to a small community in Southeastern Europe. More than 300 citizens and students of Jezero and two adjacent municipalities, Jajce and Mrkonji&cacute Grad, shared their enthusiasm for the mission during the event with the U.S. Embassy and U.S. Army Civil Affairs team. Students from both schools performed a play, "We Are Going to Mars," and experimented with robots provided by the U.S. Embassy.

"Part of NASA's mission is to inspire scientists, engineers and explorers," said Lori Glaze, director of the Planetary Science Division at NASA Headquarters in Washington. "Jezero's connection with the Mars 2020 mission may very well inspire students in Jezero, and elsewhere in Bosnia and Herzegovina, to pursue an education in the sciences."

Mars 2020 will launch from Cape Canaveral Air Force Station in Florida in July of 2020. It will land at the small Bosnian and Herzegovinian town's namesake, Jezero Crater, on Feb. 18, 2021.

NASA's Jet Propulsion Laboratory in Pasadena, California, is building and will manage operations of the Mars 2020 rover for the NASA Science Mission Directorate at the agency's headquarters. Caltech manages JPL for NASA. NASA will use Mars 2020 and other missions, including to the Moon, to prepare for human exploration of the Red Planet. The agency intends to establish a sustained human presence on and around the Moon by 2028 through NASA's Artemis lunar exploration plans.