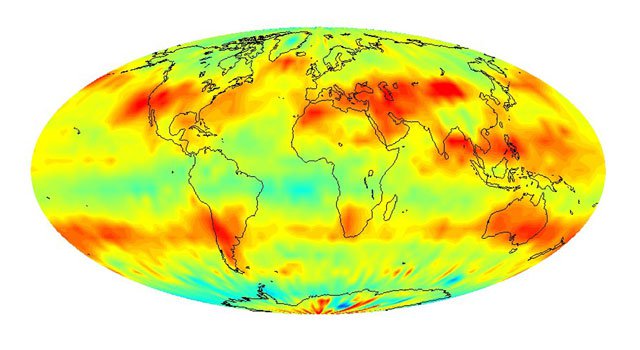 This image was created with data acquired by the Atmospheric Infrared Sounder, AIRS, during July 2008. The image shows large scale patterns of carbon dioxide concentrations that are transported around the Earth by the general circulation of the atmosphere.Full image and caption
Credit: NASA/JPL

A NASA/university team has published the first global satellite maps of the key greenhouse gas carbon dioxide in Earth's mid-troposphere, an area about 8 kilometers, or 5 miles, above Earth.

PASADENA, Calif. - A NASA/university team has published the first global satellite maps of the key greenhouse gas carbon dioxide in Earth's mid-troposphere, an area about 8 kilometers, or 5 miles, above Earth. The team's study reveals new information on how carbon dioxide, which directly contributes to climate change, is distributed in Earth's atmosphere and moves around our world.

A research team led by Moustafa Chahine of NASA's Jet Propulsion Laboratory, Pasadena, Calif., found the distribution of carbon dioxide in the mid-troposphere is strongly influenced by major surface sources of carbon dioxide and by large-scale atmospheric circulation patterns, such as the jet streams and weather systems in Earth's mid-latitudes. Patterns of carbon dioxide distribution were also found to differ significantly between the northern hemisphere, with its many land masses, and the southern hemisphere, which is largely covered by ocean.

The findings are based on data collected from the Atmospheric Infrared Sounder (AIRS) instrument on NASA's Aqua spacecraft between September 2002 and July 2008. Chahine, the instrument's science team leader, said the research products will be used by scientists to refine models of the processes that transport carbon dioxide within Earth's atmosphere.

"These data capture global variations in the distribution of carbon dioxide over time," Chahine said. "These variations are not represented in the four chemistry-transport models used to determine where carbon dioxide is created and stored."

"Carbon dioxide is difficult to measure and track," he said. "No place on Earth is immune from its influence. It will take many independent measurements, including AIRS, to coax this culprit out of hiding and track its progress from creation to storage."

In the southern hemisphere, a belt of mid-tropospheric air containing enhanced concentrations of carbon dioxide emerged between 30 and 40 degrees south latitude. This belt had not previously been seen in the four chemistry-transport models used in this study. The researchers say the flow of air in this belt over South America's high Andes Mountains lifts carbon dioxide from major sources on Earth's surface, such as the respiration of plants, as well as forest fires and facilities used for synthetic fuel production and power generation. A portion of this lifted carbon dioxide is then carried into the mid-troposphere, where it becomes trapped in the mid-latitude jet stream and transported rapidly around the world. "The troposphere is like international waters," Chahine said. "What's produced in one place will travel elsewhere."

Study results were published recently in Geophysical Research Letters. Other participants included the California Institute of Technology, Pasadena, Calif.; and the University of California, Irvine.

More information on AIRS is online at http://airs.jpl.nasa.gov/ .