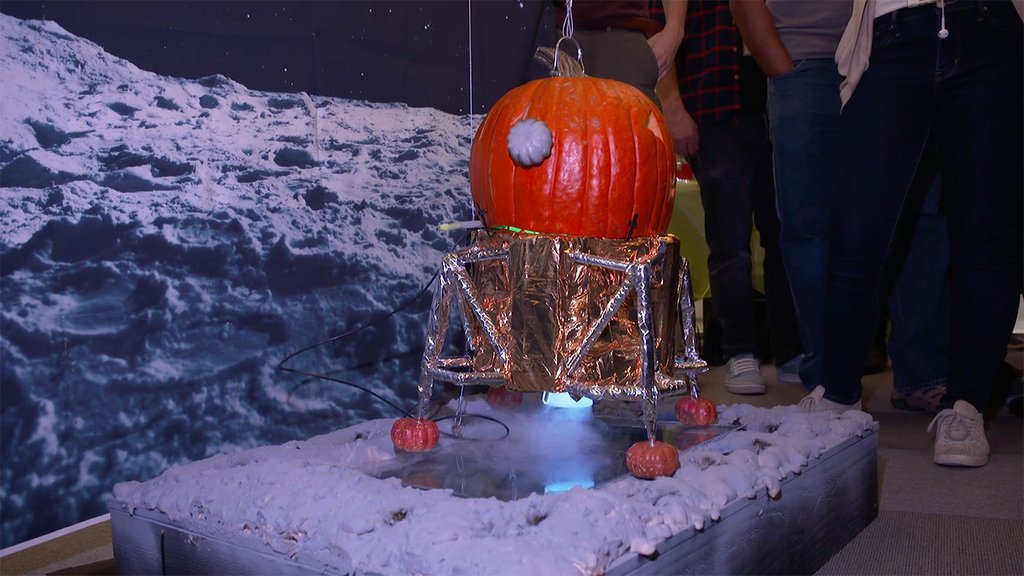 "Apollo Lunar Jack-o'-Lander" is one of two winners after touching down on the Moon in the ninth annual Halloween pumpkin-carving contest at NASA's Jet Propulsion Laboratory.
Credit: NASA/JPL-Caltech 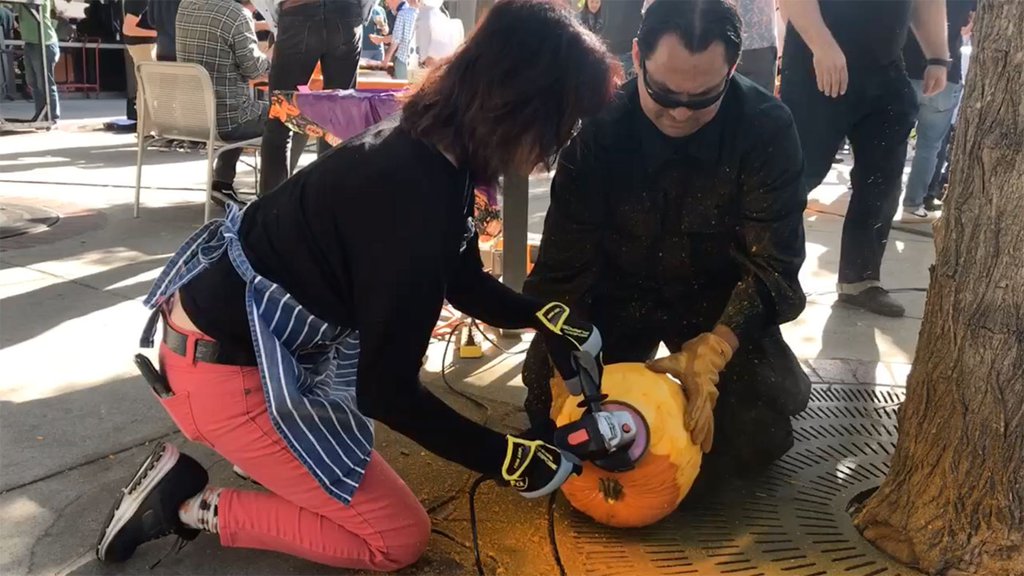 JPL engineers buff the skin off a pumpkin as the clock counts down during the ninth annual pumpkin-carving contest at JPL.
Credit: NASA/JPL-Caltech

When scientists and engineers at the Jet Propulsion Laboratory get together to create jack-o'-lanterns, the solar system's the limit.

In a dark conference room, a pumpkin gently landed on the Moon, its retrorockets smoldering, while across the room, a flying saucer pumpkin hovered above Area 51 as a pumpkin alien wreaked havoc.

Suffice to say that when the scientists and engineers at NASA's Jet Propulsion Laboratory in Pasadena, California, compete in a pumpkin-carving contest, the solar system's the limit. Now in its ninth year, the contest gives teams only one hour to carve (off the clock, on their lunch break), though they can prepare non-pumpkin materials - like backgrounds, sound effects and motorized parts - ahead of time.

"It's totally different from our normal engineering work, which makes it a nice change of pace. You don't get to do much arts and crafts in the rover world," said Billy Allen, a JPL mechatronics engineer on the Mars 2020 rover.

Once a year at Halloween, hardworking JPL engineers put their skills to the test in a highly competitive pumpkin carving contest. The result: A pumpkin gently landed on the Moon, its retrorockets smoldering, while across the room a Nemo-inspired pumpkin explored the sub-surface ocean of Jupiter moon Europa. Suffice to say that when the scientists and engineers at NASA's Jet Propulsion Laboratory compete in a pumpkin-carving contest, the solar system's the limit. Take a look at some of the masterpieces from 2019. Now in its ninth year, the contest gives teams only one hour to carve and decorate their pumpkin though they can prepare non-pumpkin materials - like backgrounds, sound effects and motorized parts - ahead of time.

His team's "Lunar Jack-o'-lander" - a tribute to Apollo 11's 50th anniversary - took first prize. To create the landing sequence, they used a pulley system to lower the Moon-bound gourd onto a screen playing real Apollo audio and footage while "smoke" from a fog machine billowed from beneath the spacecraft.

The other winner, "Lucy's Chocolate Factory," was a life-size re-creation of the "Job Switching" episode from the TV show "I Love Lucy," complete with a pumpkin-headed Lucy standing in front of a candy-carrying conveyor belt.

Not that choosing just two winners from all the creative entries is easy. There was a Europa lander drilling through the moon's ice into the ocean below and discovering life: a pumpkin version of Disney's Nemo. One team went with a smoking, green-scaled dragon emerging from a pumpkin egg. Another created a tableau from the movie "Us," with a pumpkin stabbing its twin. This being JPL, which specializes in robotic exploration, there was even a cat pumpkin on a Roomba that chases a laser pointer.

Senior mechanical engineer Mike Meacham helps run the contest while also participating. His team, made up of more senior engineers and managers, riffed on their age with "Emoji Hell," a giant Newton's cradle made of an emoji pumpkin and bowling balls. "I think people are going bigger this year. I've seen a lot of structures, including our own, which is enormous. I had to sneak it in last night," he said. His hunch as to why the entries may be a little bigger this year? With so many people focused on keeping the Mars 2020 rover on schedule for its launch next July or August, "It's nice to do something different."

After the hectic timed portion of the event, during which some teams used table saws and power drills, the creations were moved to the judging rooms. Then, as other employees admired their handiwork, a panel of judges, made up of other engineers and invited guests, examined the pumpkins as well with the lights on and off - all the better to see the creative use of lights and smoke machines.

JPL takes pride in its Halloween traditions, especially since the holiday is also the Lab's birthday. In addition to pumpkin carving, JPLers will compete in a costume contest and celebrate with horror-movie-themed exoplanet posters.