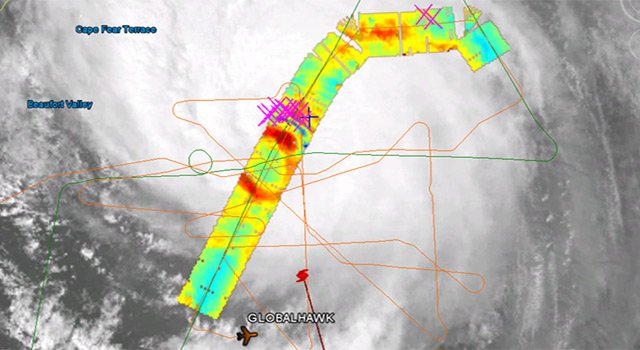 Figure 1Hurricane Earl's eye, as measured by NASA's HAMSR intrument on Sept. 2, 2010. The data reflect the brightness temperatures of the storm with cooler temperatures in shades of blue and green and warmer temperatures in oranges and reds.  The pink crosses represent lightning.
Credit: NASA-JPL/Data SIC/NOAA/U.S. Navy/NGA/GEBCO/Google

Figure 2The early evolution of Hurricane Earl is shown in this pair of images from JPL's APR-2 instrument. The left image was taken on August 29, the right image on August 30.  The August 30th image shows a more distinct and smaller eye and sharper eye wall.  The colors represent the intensity of the precipitation with the most intense shown in shades of red and pink.
Credit: NASA-JPL 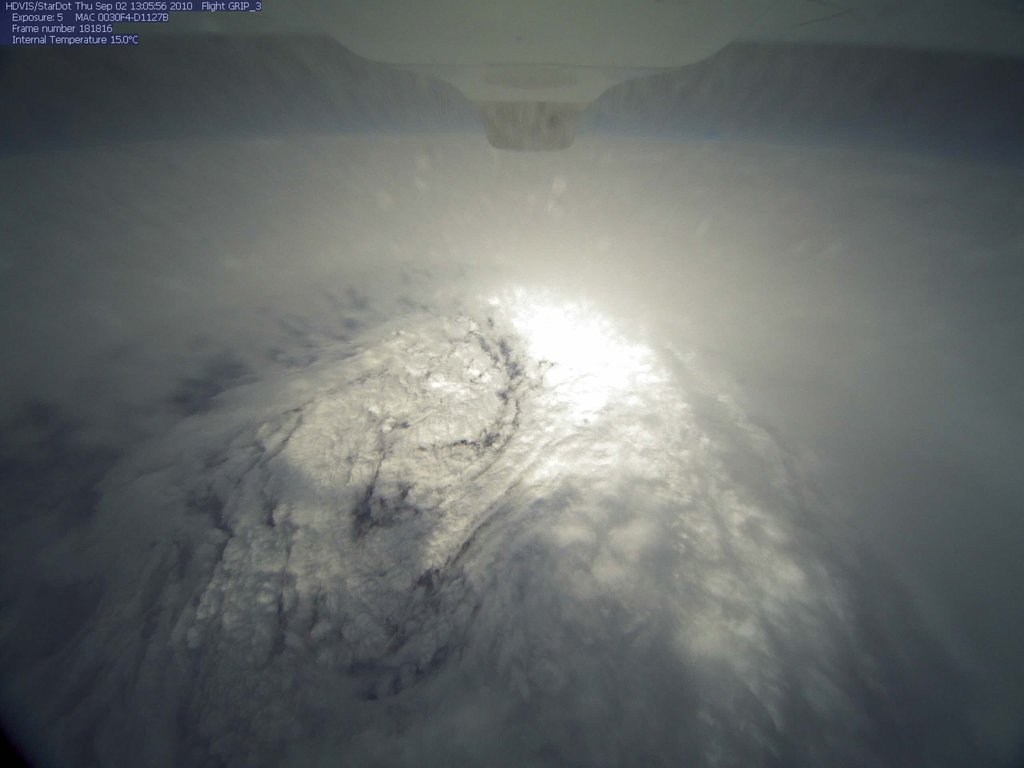 Hurricane Earl, currently a Category Two storm on the Saffir-Simpson scale with maximum sustained winds of 100 knots (115 miles per hour), continues to push relentlessly toward the U.S. East Coast, and NASA scientists, instruments and spacecraft are busy studying the storm from the air and space. Three NASA aircraft carrying 15 instruments are busy criss-crossing Earl as part of the agency's Genesis and Rapid Intensification Processes mission, or GRIP, which continues through Sept. 30. GRIP is designed to help improve our understanding of how hurricanes such as Earl form and intensify rapidly.

The Global Hawk left NASA's Dryden Flight Research Center, Edwards, Calif., at 9 p.m. PDT on Sept. 1, and emerged off the coast of Florida seven hours later to begin its first-ever flight over a hurricane. The plane spent the day today flying over Earl and is returning to Dryden tonight. An image of Earl as seen the morning of Sept. 2 from a high-definition camera aboard the Global Hawk is shown in Figure 3.

HAMSR has been able to make multiple passes straight across Earl's eye. Figure 1 shows brightness temperature data collected by HAMSR over a half-hour sequence of overpasses around 3 p.m. EDT on Sept. 2. The Global Hawk was flying at an altitude of about 19.2 kilometers (63,000 feet) approximately 1,125 kilometers (700 miles) off Florida's east coast. Earl's eye is visible as the blue-green circular area in the center of the image, surrounded by orange-red. The eye is colored blue-green because the instrument is seeing the ocean surface, which appears cool to the instrument. The surrounding clouds appear warm because they shield the cooler ocean surface from view. Just north of the ring of clouds is a deep blue arch, which represents a burst of convection (intense thunderstorms). The pink crosses in the image represent lightning in the area, as measured by a lightning network. Ice particles and heavy precipitation in the convective storm cell cause it to appear cold.

This image illustrates many of the capabilities of HAMSR, from measuring sea surface and atmospheric temperature to measuring convection and precipitation. For example, since there is a clear view of Earl's eye down to the ocean surface, scientists can determine the change of atmospheric temperatures at different altitudes within the eye, an indication of the strength of convection in the core of the storm. This warming is due to the condensation of water vapor that has been lofted to higher altitudes by the strong convection. This is the engine that powers the storm. That temperature data, in turn, can be used to estimate the intensity of the hurricane. NOAA's National Hurricane Center is currently using this method to determine hurricane intensity.

A second JPL instrument participating in GRIP and flying over Earl is the Airborne Precipitation Radar (APR-2), a dual-frequency weather radar that is taking 3-D images of precipitation aboard NASA's DC-8 aircraft. APR-2 is being used to help scientists understand the processes at work in hurricanes by looking at the vertical structure of the storms.

The two APR-2 images that make up Figure 2 reveal the early evolution of Hurricane Earl from a rather disorganized storm (left) to a better developed hurricane with a more distinct and smaller eye and sharper eyewall (right). The data, taken during southbound passes over Earl's eye on Aug. 29 and 30, respectively, are essentially vertical slices of the storm. They correspond to the intensity of precipitation seen by the radar along the DC-8's flight track. Intense convective precipitation (shown in shades of red and pink) was observed on both sides of the hurricane's eye. The eye is indicated by the dark region near the middle of the images. The yellow-green-colored regions indicate areas of lighter precipitation. The white lines near the bottom are the ocean surface.

The progress of NASA's GRIP aircraft can be followed in near-real-time when they are flying by visiting: http://grip.nsstc.nasa.gov/current_weather.html. "Click to start RTMM Classic" will download a KML file that displays in Google Earth.

Near-real-time images from HAMSR and APR-2 are being displayed on NASA's TC-IDEAS website at http://grip.jpl.nasa.gov. The website is a near-real-time tropical cyclone data resource developed by JPL to support the GRIP campaign. In collaboration with other institutions, it integrates data from satellites, models and direct measurements, from many sources, to help researchers quickly locate information about current and recent oceanic and atmospheric conditions. The composite images and data are updated every hour and are displayed using a Google Earth plug-in. With a few mouse clicks, users can manipulate data and overlay multiple data sets to provide insights on storms that aren't possible by looking at single data sets alone.