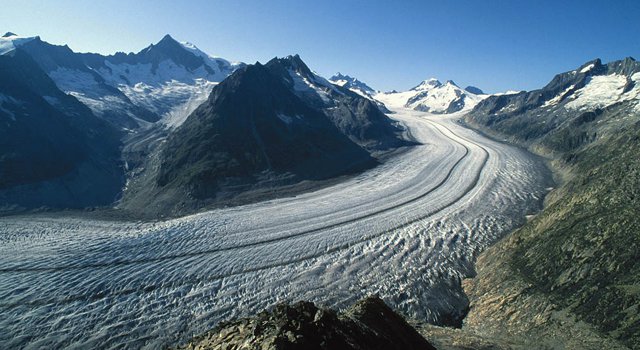 The Aletschglacier in Switzerland is the largest valley glacier in the Alps. Its volume loss since the middle of the 19th century is well visible from the trimlines to the right of the image.
Credit: Frank Paul, University of Zurich 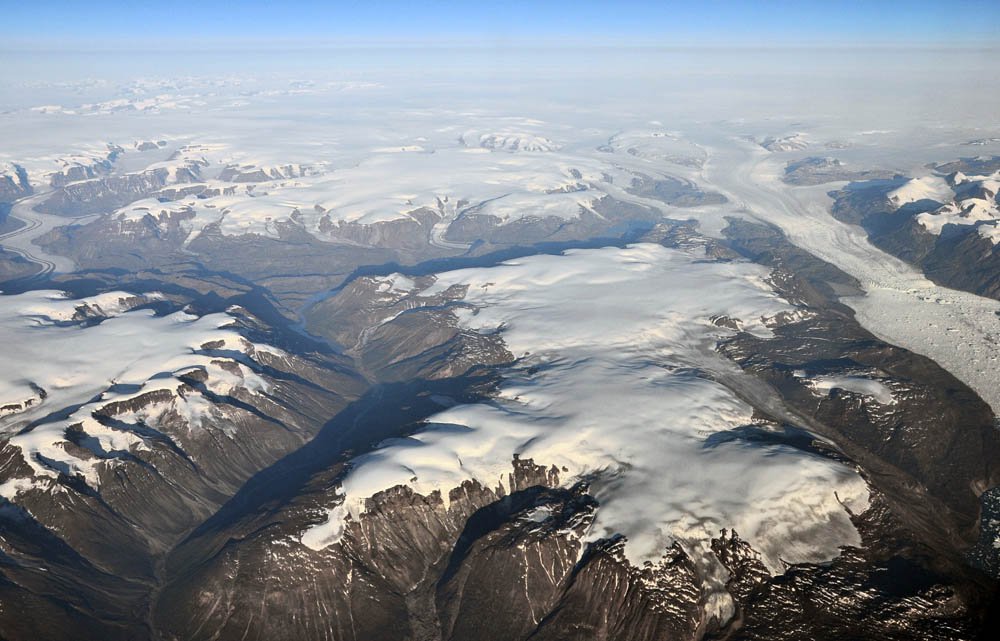 Peripheral glaciers and ice caps (isolated from the main ice sheet, which is seen in the upper right section of the image) in eastern Greenland.
Credit: Frank Paul, University of Zurich. 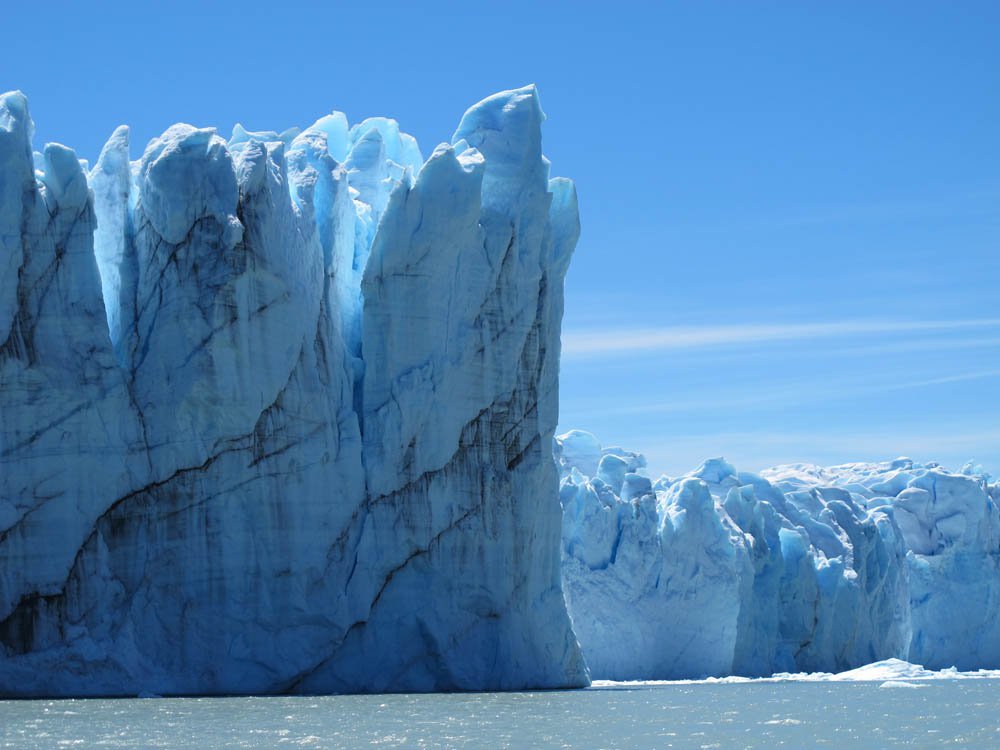 A new study of glaciers worldwide from two NASA satellites has helped resolve differences in estimates of how fast glaciers are disappearing and contributing to sea level rise.

PASADENA, Calif. - A new study of glaciers worldwide using observations from two NASA satellites has helped resolve differences in estimates of how fast glaciers are disappearing and contributing to sea level rise.

The new research found glaciers outside of the Greenland and Antarctic ice sheets, repositories of 1 percent of all land ice, lost an average of 571 trillion pounds (259 trillion kilograms) of mass every year during the six-year study period, making the ocean rise 0.03 inches (0.7 millimeters) per year. This is equal to about 30 percent of the total observed global sea level rise during the same period and matches the combined contribution to sea level from the Greenland and Antarctica ice sheets.

The study compares traditional ground measurements to satellite data from NASA's Ice, Cloud, and Land Elevation Satellite (ICESat) and Gravity Recovery and Climate Experiment (GRACE) missions to estimate ice loss for glaciers in all regions of the planet. The study period spans 2003 to 2009, the years when the two missions overlapped.

"For the first time, we have been able to very precisely constrain how much these glaciers as a whole are contributing to sea level rise," said Alex Gardner, Earth scientist at Clark University in Worcester, Mass., and lead author of the study. "These smaller ice bodies are currently losing about as much mass as the ice sheets."

The study was published Thursday in the journal Science.

ICESat, which stopped operating in 2009, measured glacier change through laser altimetry, which bounces lasers pulses off the ice surface to inform the satellite of changes in the height of the ice cover. ICESat's successor, ICESat-2, is scheduled to launch in 2016. GRACE, still operational, detects variations in Earth's gravity field resulting from changes in the planet's mass distribution, including ice displacements.

The new research found all glacial regions lost mass from 2003 to 2009, with the biggest ice losses occurring in Arctic Canada, Alaska, coastal Greenland, the southern Andes and the Himalayas. In contrast, Antarctica's peripheral glaciers -- small ice bodies not connected to the main ice sheet -- contributed little to sea level rise during that period. The study builds on a 2012 study using only GRACE data that also found glacier ice loss was less than estimates derived from ground-based measurements.

Current estimates predict all the glaciers in the world contain enough water to raise sea level by as much as 24 inches (about 60 centimeters). In comparison, the entire Greenland ice sheet has the potential to contribute about 20 feet (about 6 meters) to sea level rise and the Antarctic ice sheet just less than 200 feet (about 60 meters).

"Because the global glacier ice mass is relatively small in comparison with the huge ice sheets covering Greenland and Antarctica, people tend to not worry about it," said study co-author Tad Pfeffer, a glaciologist at the University of Colorado in Boulder. "But it's like a little bucket with a huge hole in the bottom: it may not last for very long, just a century or two, but while there's ice in those glaciers, it's a major contributor to sea level rise."

To make ground-based estimates of glacier mass changes, glaciologists perform on-site measurements along a line from a glacier's summit to its edge. Scientists extrapolate these measurements to the entire glacier area and carry them out for several years to estimate the glacier's overall mass change over time. While this type of measurement does well for small, individual glaciers, it tends to overestimate ice loss when the findings are extrapolated to larger regions, such as entire mountain ranges.

"Ground observations often can only be collected for the more accessible glaciers, where it turns out thinning is occurring more rapidly than the regional averages," Gardner said. "That means when those measurements are used to estimate the mass change of the entire region, you end up with regional losses that are too great."

GRACE does not have fine enough resolution and ICESat does not have sufficient sampling density to study small glaciers, but the two satellites' estimates of mass change for large glaciered regions agree well, the study concluded.

"We now have a lot more data for the glacier-covered regions because of GRACE and ICESat," said Gardner. "Without having these independent observations, there was no way to tell that the ground observations were biased."

The research involved 16 researchers from 10 countries, with major contributions from Clark University, the University of Michigan in Ann Arbor, Scripps Institution of Oceanography in San Diego, Trent University in Ontario, the University of Colorado at Boulder and the University of Alaska Fairbanks. For images of glaciers studied for this paper, visit: http://go.nasa.gov/15JSmzl .

GRACE is a joint mission with the German Aerospace Center and the German Research Center for Geosciences, in partnership with the University of Texas at Austin. For more about GRACE, visit: http://www.nasa.gov/grace and http://www.csr.utexas.edu/grace . For information about NASA and agency programs, visit: http://www.nasa.gov . NASA's Jet Propulsion Laboratory, Pasadena, Calif., developed the GRACE spacecraft and manages the mission for NASA's Science Mission Directorate, Washington. The California Institute of Technology in Pasadena manages JPL for NASA.