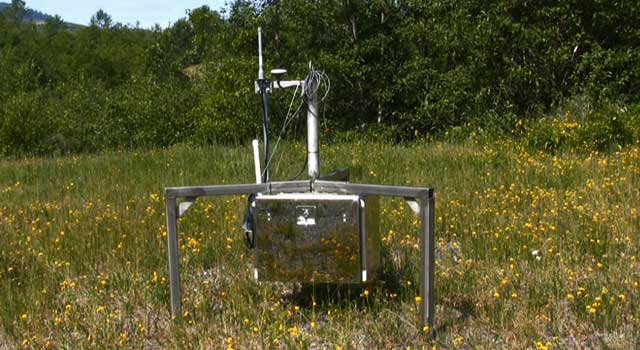 A sensor like this is being placed inside and around the mouth of Mount St. Helens. One day it may be used to respond rapidly to an impending eruption.

Scientists have placed high-tech "spiders" inside and around the mouth of Mount St. Helens, the site of the most active volcano in the United States.

PASADENA, Calif. -- Scientists have placed high-tech "spiders" inside and around the mouth of Mount St. Helens, one of the most active volcanoes in the United States. Networks such as these could one day be used to respond rapidly to an impending eruption.

On July 14, 2009, these spider pods were lowered by cable from a helicopter hovering about 100 feet up (30 meters) and gently put in hot spots inside and around the volcano crater.

These robotic emissaries were built to go where no human can and operate in extreme temperatures and treacherous terrain. Fifteen pods form a virtual wireless network, communicating with each other and the Earth Observing-1 (EO-1) satellite, operated by NASA's Goddard Space Flight Center, in Greenbelt, Md.

"Taking data from the ground onsite and from above by satellite gives you a great picture of what is going on inside the volcano," said Steve Chien, principal scientist for autonomous systems at JPL.

Each pod contains a seismometer to detect earthquakes; a GPS receiver to pinpoint the exact location and measure subtle ground deformation; an infrared sounder to sense volcanic explosions; and a lightning detector to search for ash cloud formation. The main instrument box is the size and shape of a microwave oven. It sits on top of a three-legged tripod, which is why scientists call them spiders. The pods are powered by batteries that can last for at least a year.

"With these high-tech instruments, we can rapidly respond during periods of volcanic unrest to supplement our permanent monitoring network or quickly replace damaged stations without excessive exposure to personnel," said Rick LaHusen, an instrumentation engineer with the U.S. Geological Survey's Cascades Volcano Observatory, Vancouver, Wash.

In 1980, a tremendous eruption at Mount St. Helens caused considerable loss of life and damage. More recently, in 2004, the volcano came back to life and erupted more than 100 million cubic meters (26 billion gallons) of lava, accompanied by a series of explosions that hurled rock and ash far from the vent. If eruptions like these ever occur again, a sensor network could be quickly put in place to provide valuable real-time information to scientists and emergency services.

This work is part of NASA's plan to develop a sensor web to provide timely data and analyses for scientific research, natural hazard mitigation, and the exploration of other planets in this solar system and beyond.

"We hope this network will provide a blueprint for future networks to be installed on many of the world's unmonitored active volcanoes, so educated and reliable estimates can be made when a town or a village needs to be evacuated to reduce the risk to life and property," said Project Manager Sharon Kedar (shah-RONE keh-DARR) of JPL.

Chien said, "Hostile environments like Mount St. Helens are proving grounds for future space missions, such as to Mars, where we may someday have similar sensor networks to track a meteor strike, dust storm or Mars quake, as a virtual scientist on the ground."

A team of engineers, students, volcanologists and geologists put the system together. The team includes the U.S. Geological Survey's Cascades Volcano Observatory staff, who designed and built the "spider" hardware; Washington State University in Vancouver, where the sensor network software was written; and NASA, which developed software to make the spiders able to detect events to trigger space observations by the EO-1 satellite.

The work is funded by NASA's Earth Science Technology Office through the Advanced Information System Technology program and also by the USGS Volcano Hazards Program. JPL is managed for NASA by the California Institute of Technology in Pasadena.
› Video: Space Age Volcano Monitoring Network
› More information on Volcano sensor networks